You could be forgiven for thinking that Will Smith’s now infamous onstage slap was the first time anything shocking had happened at the Academy Awards. In less than 24 hours the story has already become part of Oscars folklore, a standalone event that will be debated and dissected until the end of time.

But while Smith’s slap may still be ringing in our ears, it’s really just the latest in a long history of shocking and extraordinary Oscar moments.

Arguably one of the most memorable moments in Oscars history, it was 1973 when Marlon Brando won Best Actor for his role in The Godfather. Instead of accepting the award, Brando was a no show, sending Native American actress and activist Sacheen Littlefeather in his place. 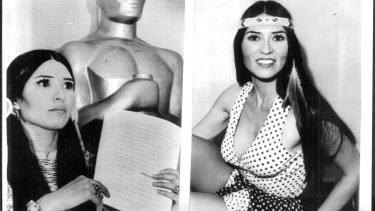 Sacheen Littlefeather, who served as “stand-in” for Marlon Brando to announce his refusal of the “Best Actor” Oscar at the Academy Awards ceremonies. March 28, 1973. (Photo by UPI).Credit:UPI

“He has asked me to tell you…that he very regretfully cannot accept this very generous award, the reasons for this being the treatment of American Indians today by the film industry.”

It’s bizarre that the most famous Sally Field quote is “You really like me”, considering that’s not what she said at all. Field won Best Actress in 1985 for Places In The Heart and delivered a heartfelt, albeit slightly over the top, acceptance speech. “I can’t deny the fact that you like me. Right now, you like me,” gushed Field.

Somewhere along the way, the quote changed into “you really like me,” turning Field’s moment of jubilation into desperation, much to her eternal dismay. “Sometimes I want to punch them in the nose, but mostly because they don’t ever say the context of what I said before,” she explained to Variety earlier this year.

1999: Roberto Benigni leaps onto chairs and up to the stage

The Oscars can be a painfully dull affair, full of polite clapping and insincere “just nice to be nominated” sentiment, so it was refreshing to see Italian actor-director Roberto Benigni bring a bit of Euro-chaos to proceedings. After taking out Best Foreign Language Film for Life Is Beautiful, Benigni clambered through the crowd, climbing over chairs to make his way to the stage.

For a while during the late 90s and early 2000s, Angelina Jolie was a headline generator without peer, fascinating Hollywood with her edgy roles and blood vials. But things quickly went from intriguing to borderline incestuous when she kissed her brother, James Haven, on the lips while walking the Oscars red carpet in 2000. 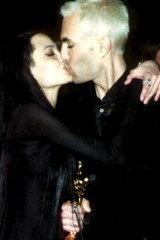 Angelina Jolie kissing her brother James Haven at the 2000 Oscars.

Jolie would win Best Supporting Actress that night and further blur the line by declaring: “I’m in shock, and I’m so in love with my brother right now.” Take that, Gyllenhaal siblings.

2003: Adrien Brody kisses Halle Berry; they are definitely not in love

From one weird kiss to another, Adrien Brody shocked everyone, especially Halle Berry, when he kissed the actress passionately on the lips (without warning) after winning Best Actor for his role in The Pianist.

Brody’s kiss was met with raucous applause by the audience, but Berry looked rather uncomfortable, and the moment has not aged well.

“That was not planned. I knew nothing about it,” Berry told TV host Andy Bravo during a taping of Watch What Happens Live in 2017. “I was like, ‘What the f–k is happening right now?’ That was what was going through my mind.”

As much as we love Pulp Fiction era Travolta, we can all agree that the actor (and his hairline) have been on a curious journey over the last decade. So perhaps we shouldn’t have been shocked when he managed to turn a simple introduction into an evergreen meme.

Tapped to introduce Frozen star Idina Menzel, Travolta blessed us with this unforgettable moment: “Please welcome the wickedly talented, one and only Adele Dazeem.” Ironically, Menzel was on stage to perform the hit song, Let It Go, which of course, we never would.

If ever there was a ‘you had one job’ moment, it arrived during the presentation for Best Picture at the 2017 Academy Awards. Warren Beatty and Faye Dunaway announced La La Land as the winner, and the entire cast promptly made their way to the stage. But it wasn’t until La La Land producer, Fred Berger, was midway through his acceptance speech that the mishap was revealed. 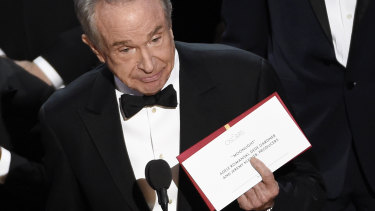 Presenter Warren Beatty holds up an envelope revealing “Moonlight” as the winner of best picture at the Oscars on Sunday, Feb. 26, 2017, at the Dolby Theatre in Los Angeles. (Photo by Chris Pizzello/Invision/AP)Credit:AP

Beatty had mistakenly been handed the envelope containing Emma Stone’s win for Best Actress (in La La Land) when in reality, Moonlight had won Best Picture. Chaos ensued as the cast of both films ended up on stage before Berger summed up what was going on: “We lost, by the way, but you know.”

Sometimes the shocks are so shocking they shock us before the Oscars have even taken place.

It was December 4, 2019, when Kevin Hart was given the honour of hosting the Oscars for the first time. But his joy was short-lived after Twitter dredged up a series of homophobic tweets Hart had made in the past. By December 7, Hart had lost the gig, and the ceremony decided to go ahead without a host.

I mean, we already know all about this one, don’t we?