The ABC may be marking the grand age of 90, but the old girl doesn’t do low-key celebrations like it used to.

As Leigh Sales departs the broadcaster’s most high-profile anchor role this week, her send-off is accompanied by all the bells and whistles of modern TV celebrity: farewell interviews, a promotional campaign celebrating her years in the 7.30 chair, and a half-hour tribute special airing on Friday night. 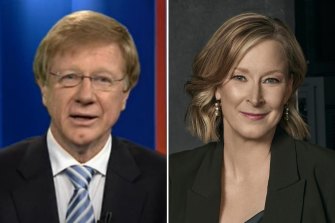 It’s a sign of how the ABC has moved to find its modern home in the age of social media and celebrity-driven coverage, even of its news and current affairs anchors.

And the once tradition-bound marketing minds at Aunty are not being shy about playing a game they once largely ceded to their commercial counterparts.

It’s useful to contrast the hoopla surrounding the departure of Sales to the way Kerry O’Brien said goodbye in 2010, when he left the chair at what until then had been The 7.30 Report.

“I’ve enjoyed your company and I hope you’ve enjoyed mine,” O’Brien said. “There’s a great team of people in this place, but you know that, and you can expect good things from 7.30 with Leigh Sales and Chris Uhlmann next year.”

Watching O’Brien’s final episode now is a reminder of how the world, the program and TV in general have changed. There was a Clarke and Dawe sketch, and an interview with Geoffrey Rush.

In his 15 years hosting the national edition of The 7.30 Report, O’Brien covered three prime ministers; Sales has had to wrap her head around six in 12 years. When O’Brien’s run began, the internet barely existed and social media was still a decade away. Sales, a perennial target of vile abuse online, has had much to say about how that has turned out.

And the way the ABC deals with goodbyes and other major moments has also shifted. The national broadcaster’s celebration of Sales’ tenure in its most prominent anchor chair is of a different stripe altogether.

For weeks, Aunty has been building up to the moment with a campaign heralding Sales’ departure, and plugging a tribute show that will air on Friday night.

As TV tributes go, it is most reminiscent of the 1992 send-off to Jana Wendt from A Current Affair (Wendt, like O’Brien, had a Clarke and Dawe sketch on her final show). In the 24/7, celebrity-driven social media age, the ABC does once unthinkable things, like win Gold Logies, as it did when Tom Gleeson carried off his great gold heist in 2019. An unusual moment it was: that had happened four times in 62 years and the last winner before Gleeson was Norman Gunston in 1976.

And then there was Tony Armstrong’s win as most popular new talent at the 2022 Logies, which prompted an avalanche of celebration including cake and balloons on News Breakfast where Armstrong has made his mark.

This being the ABC, these celebrations of its talent do not sit well with everyone. Presenters on Sky News have been especially exercised by the Sales hoopla, with regular guest and The Australian’s media reporter Sophie Elsworth this week telling the national broadcaster to “get a bit of a grip”. This admonition was affirmed by host Chris Kenny, who declared with a straight face that it was “all a bit strange and self-indulgent”.

It’s likely the ABC will take this sort of criticism, and where it’s coming from, as a sign it is doing something right.

As for Sales, on Thursday she began her final day with a round of media interviews, including a live cross into News Breakfast, where she revealed she had recently been on the phone to her predecessor. She noted that the national edition of the show had seen only one change of host (and one change of name) in its 27 years on air under the 7.30 and The 7.30 Report banners.

“I was thinking about when I was a young journalist … and if you got in the lift with Kerry O’Brien it was like, ‘My gosh’,” Sales recalled.

My gosh, indeed, and now the baton is handed to Sarah Ferguson. It happens in the same week as Aunty marks its 90th birthday, and given the slings and arrows it often endures you can hardly blame her for giving herself a pat on the back.