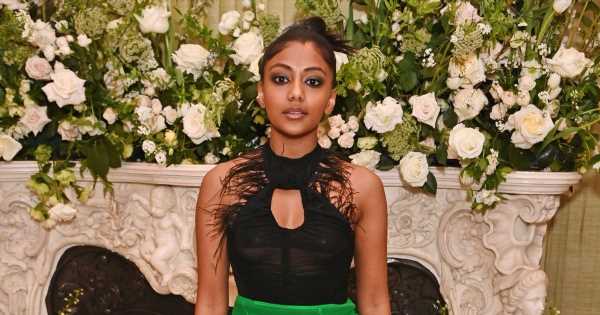 Charithra Chandran is currently starring in the much-anticipated series two of Bridgerton.

The 25-year-old plays Edwina Sharma in the Regency era drama and Netflix smash.

While the first season of Bridgerton focused on Daphne Bridgerton's (Phoebe Dynevor) romance with the Duke of Hastings (Regé-Jean Page), the second instalment focuses on the eldest Bridgerton sibling, Anthony Bridgerton's quest to find love.

Charithra's character Edwina Sharma features in the show as a potential love interest for heartthrob Anthony, played by Jonathan Bailey.

Her debut on screen has led to viewers curious to learn more about the star and her life off-screen so let's take a closer look.

Charithra studied at the prestigious Oxford University and originally planned a career in public policy.

The now TV star graduated with a BA in Philosophy, Politics, Economics and had no plans to act full time.

Speaking to Shondaland, she said: "I never didn’t want to be an actress, I just thought it was impossible. Sometimes you don’t allow yourself to dream of things you know are not going to happen." During a gap year following university, she decided to pursue acting and quickly bagged the Bridgerton role, however, doesn't regret her studies saying she "always [has] that backup plan."

Charithra originally auditioned for the part of Kate Sharma, played by Simone Ashley, before being asked to try out for Edwina.

"I had a few auditions for that and decided it just didn’t work out. And that was fine. By then, I’d had another offer for a TV show. So, in the new year I was like, 'Okay, one door closes; another opens. It just wasn’t meant to be. Oh, well," she's said.

Charithra's audition process began in November 2020, before the first season of Bridgerton had even aired.

In February 2020, she was asked to play Edwina in the drama series.

Speaking about the role, she says: "She turns from this young girl into a confident young woman, and it’s about self-discovery and self-love and the bravery that those things require."

In an interview with The Kit, Chandran admitted that she's very different from her more reserved character, describing herself as "quite independent and autonomous in real life."

The Sharma family were written in the book as the Sheffields, however, the three women were re-written as Indian for the TV series.

Charithra is British-Indian, and her Tamil heritage is extremely important to her.

The TV star previously explained: "I’m from Tamil Nadu, which is the southernmost state in India.

"Our language, Tamil, does not derive from Sanskrit, though it’s as old as Sanskrit. So, our culture and our history is very unique to our area, [where] you can see a lot of Tamil pride.

"It makes me so happy to see so many Tamils doing so well in this industry and in others — Aziz Ansari; Padma Lakshmi; Mindy Kaling; Maitreyi Ramakrishnan; the CEO of Google, Sundar Pichai; and maybe the most famous example, Kamala Harris."

For updates on all your favourite celebs and TV stars, sign up to our daily newsletter here .