Gin maker Holly Klintworth has a problem with her “Heartbreak” gin which is made with pinot noir.

“The season was getting later and later and the weather was becoming more challenging as the days progressed,” Klintworth says. “We’re really proud of the product that we’ve put forward this year, even though in volume it was a lot less than we were hoping for.” 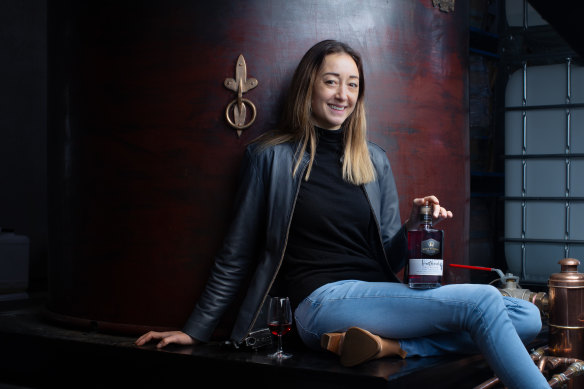 Last year Bass & Flinders, based in Dromana, sold out of 1500 bottles of its pinot noir gin and while it doubled its production to 3000 bottles this year Klintworth says if she could have got her hands on more pinot she could have made a lot more.

Wine production was down across the country according to the 2022 National Vintage Report, which estimates the overall Australian wine grape crush for 2022 at 1.73 million tonnes, which is 13.5 per cent below the record crush of 2.01 million tonnes recorded in 2021.

The top four red varieties – shiraz, cabernet sauvignon, merlot and pinot noir – were all down by 19 per cent.

The association said grape production was affected by wet La Nina conditions and a significant wind and rainstorm in October last year caused a great deal of damage to the harvest.

Mandala Wines’ owner and winemaker Charles Smedley says the harvest of pinot noir in the Yarra Valley was about 40 per cent down.

“We had storms and winds come through in October and November during flowering and fruit set, so we had very poor fruit set with very small bunches,” Smedley says.

While volume is down Smedley says the quality of the pinot noir grapes harvested are not.

“That’s given us a poor tonnage but we do get exceptional fruit with great flavours coming through. In hindsight, 2022 will be one of the most exciting vintages we will see,” he says.

“People are drinking more pinot noir and there just wasn’t the supply in the first place,” he says. “There is definitely a consumer shift towards lighter wines and of course pinot ticks that box and at the same time only 4 per cent of the national crop is planted for pinot noir.”

The low harvest has come as demand has increased for the variety from consumers, with sales of pinot noir soaring over recent years at online wine retailer Vinomofo

“There’s been a rise and rise in interest and consumption of what one might call slightly brisker lighter styles of wine,” Vinomofo chairman Paul Henry says. “I think it’s just the general maturity in Australia as a drinking nation and this generation looking for new things as new generations tend to other than necessarily just inheriting the habits and stylistic proclivities of the previous generation.”

Henry says getting enough pinot noir for Vinomofo’s customers has “never been easy” and is particularly challenging at the moment.

“The trick with pinot noir is finding enough quantities at the right price,” he says. “It’s kind of a seller’s market at the moment.”

Despite the lack of supply, Klintworth says there is no question of making her gin with another wine variety that is more readily available.

“Pinot noir very much encapsulates red wine of the Mornington Peninsula area, it’s what the peninsula is known for,” she says. “It was all about producing a gin that very much embodies our region and our location here on the peninsula.”

Here's Why You Should Never Buy Bagged Kale, According to an Expert