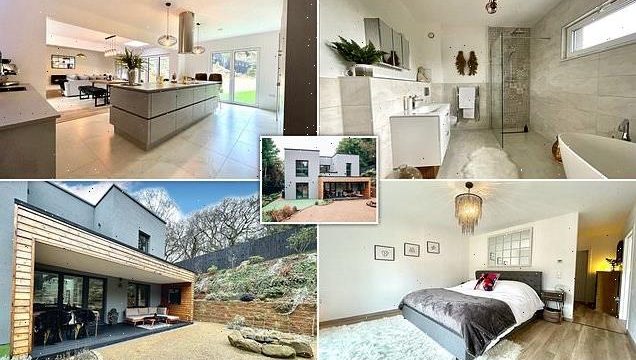 Couple reveal they built a luxury eco-house in just SIX weeks using a pre-constructed timber frame – and the Cheshire pad boasting a gym and forest garden is now on the market for £825,000

A couple have revealed how they transformed an empty piece of rural Cheshire countryside into an eco-friendly luxury four-bedroom family home – in just six weeks.

Sue Robinson, 51, from Cheshire, and her partner, set about building the pre-constructed house on the edge of Delamere Forest in 2019, with a short construction time and eco-friendly credentials at the top of their wish list.

The amateur developers had the home designed and built off-site first by engineers, so that the components were easy to put together after being shipped to the site – meaning a roof was on their home in just four days.

After going from an empty plot to a fully-furnished home – complete with a stunning kitchen, gym, office, beautifully landscaped garden and mod cons including underfloor heating – in less than 50 days, the couple have lived in the house ever since.

However, they’ve now decided to up sticks and move abroad, putting their pad on the market for a cool £825,000. 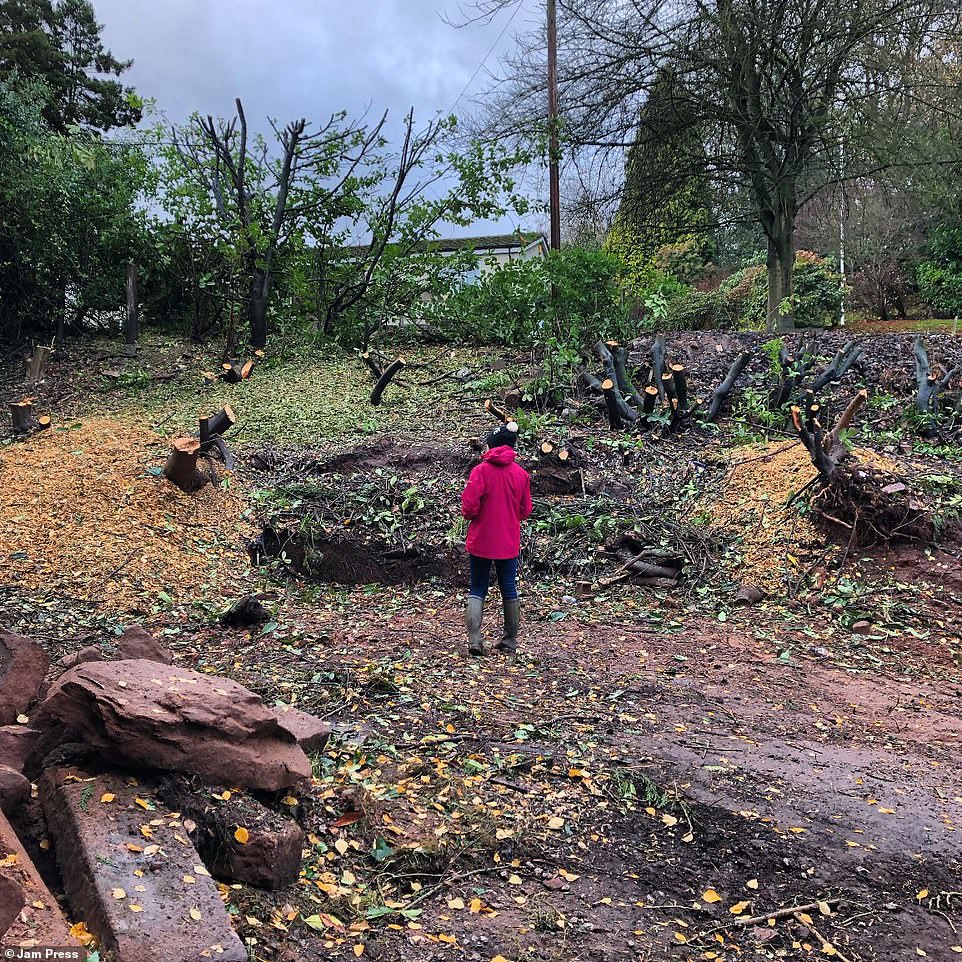 How it all began: Trees were cut down to make space for the luxury eco-home, which has the latest technology to ensure the least amount of impact on the environment is made; owner Sue Robinson is pictured in the empty plot ahead of construction in 2019 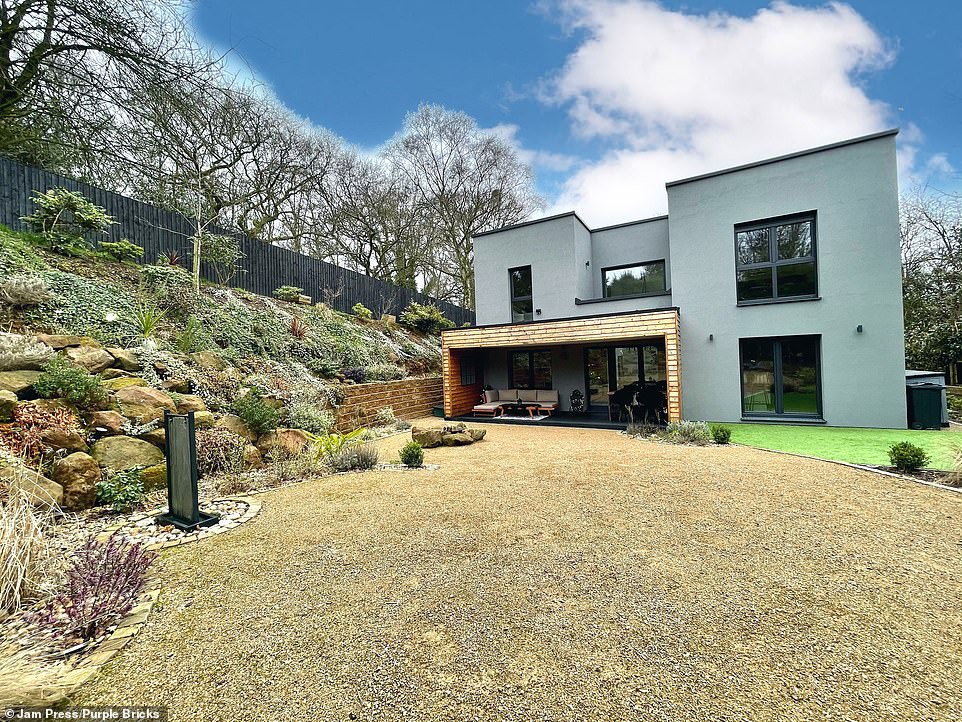 Quick work! Sue, 51, and her partner wanted an eco-friendly home that wouldn’t take long to build after buying a plot on the edge of Delamere Forest, in the midst of beautiful Cheshire countryside 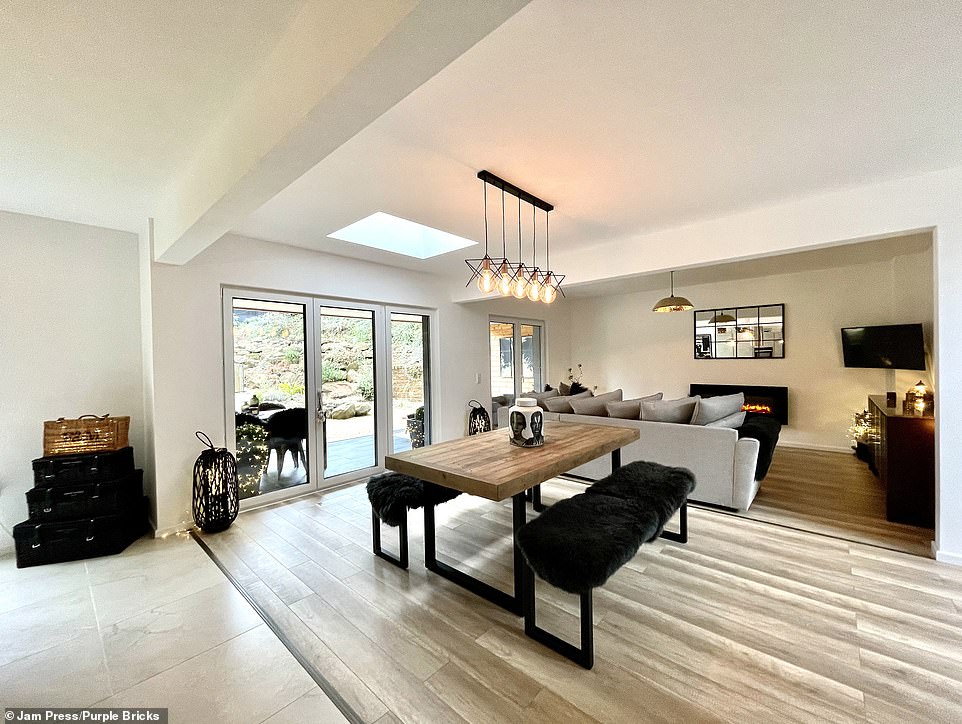 In 2019, the couple had their designs for the four-bed home – complete with luxury kitchen, gym, office, open-plan living areas (pictued) and landscaped gardens – created off-site before having the components shipped in by crane to the plot 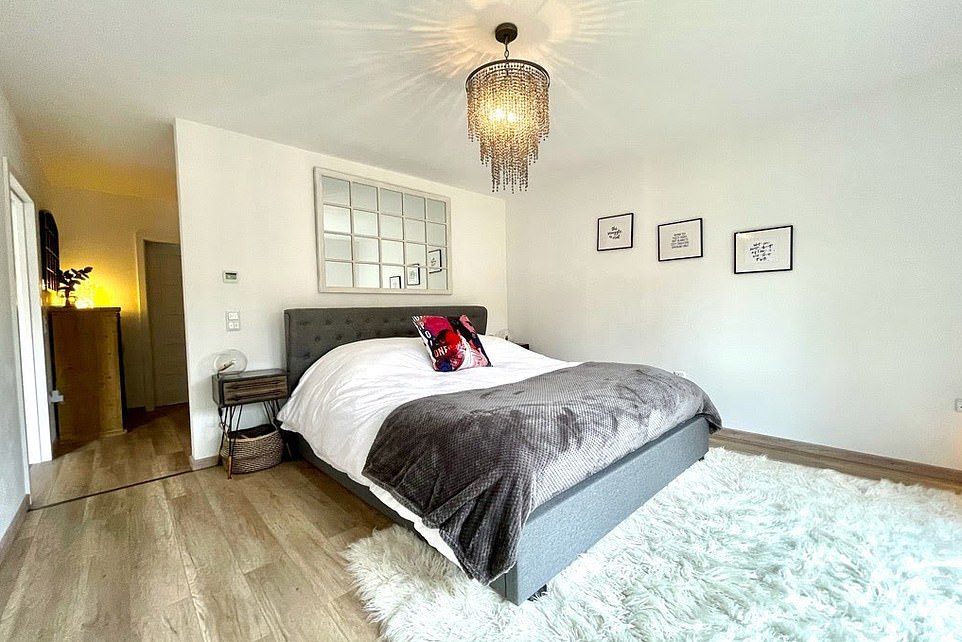 Decisions: One of the bedrooms in the couple’s home – they said the hardest part of designing their own pad as amateur developers was knowing where to begin when it came to the lay-out 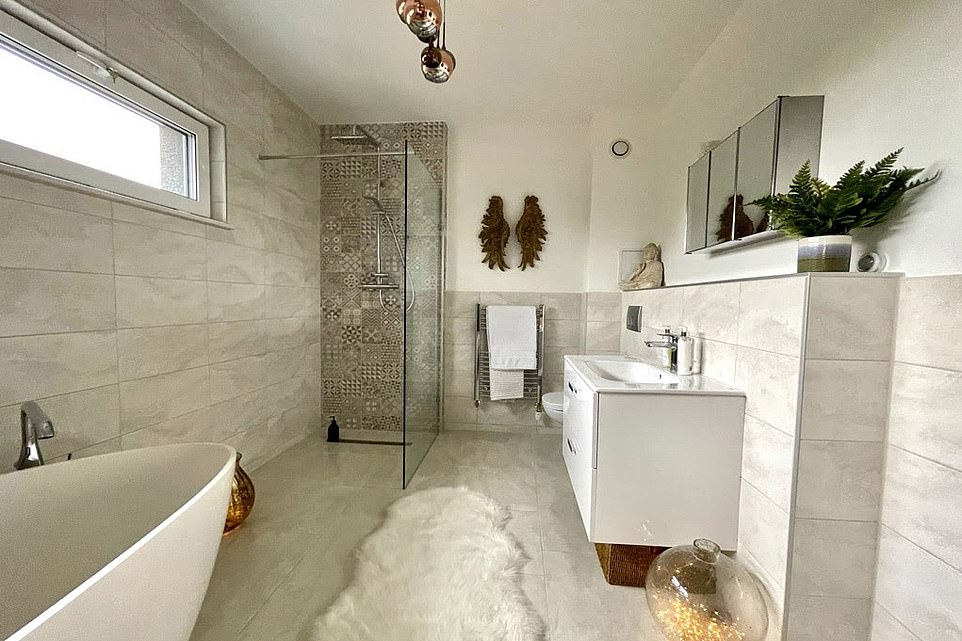 The entire project took six weeks to go from an empty plot to a fully-furnished home; with Sue choosing cool neutrals and trendy accessories to ensure a modern feel. Pictured: the home’s bathroom 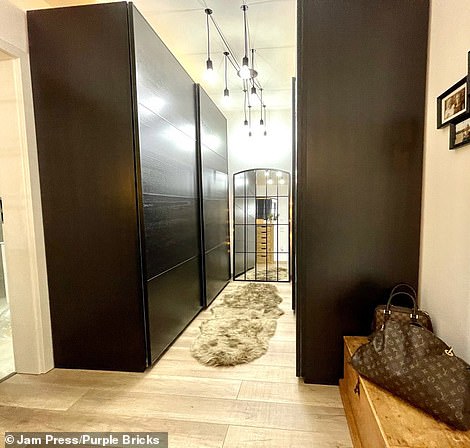 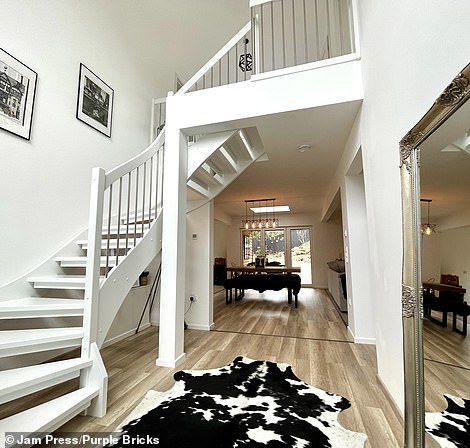 Stylish: The house comes complete with a stunning kitchen, gym, office, beautifully landscaped garden and mod cons including underfloor heating. Pictured, left: a walk-in wardrobe in one of the bedrooms and, right, the central staircase

Sue said the couple had wanted to build something bespoke to what they wanted in a house.

She explains: ‘We wanted to build an energy-efficient, economical-to-run house with short construction time.

‘We loved the project of creating our own home tailored to our specific needs – it reflects who we are.’

The house, decorated in cool neutral colours, with a minimalist feel has a large, sleek kitchen, with an open-plan dining and living room space, and a window wall overlooking the garden.

Outside, there’s an ample terrace with a covered deck space and an outdoor sofa that overlooks a landscaped garden with the wilds of Delamere Forest, in the heart of the Cheshire countryside, just beyond it.

The key to cutting down building time was using a timber frame, she says, allowed them to build the four-bedroom house in weeks rather than months.

After consulting an architect with their ideas, the couple sent their plans to a factory where the whole building was designed and built offsite by engineers.

Sue says that starting to design their dream pad was the hardest part, with the sky effectively the limit. She said: ‘The layout could be whatever we wanted it to be – so the freedom of choice was a little overwhelming at first. 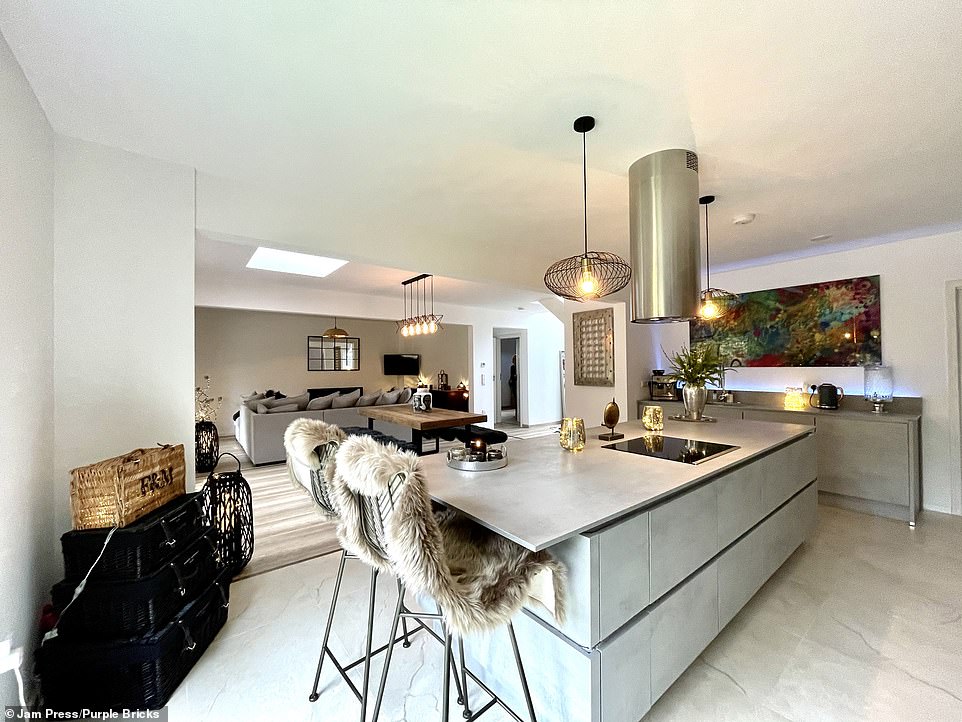 The key to cutting down building time was using a timber frame – also eco-friendly – because less construction needed to take place on site. Pictured: The open-plan island kitchen, in neutral colours with clean lines, has helped the home achieve an asking price of £825,000 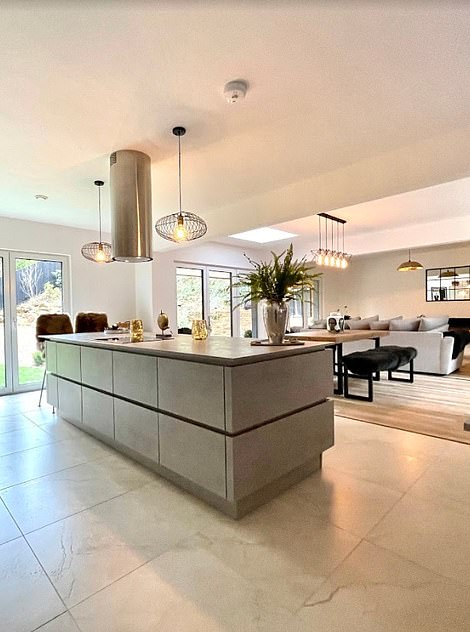 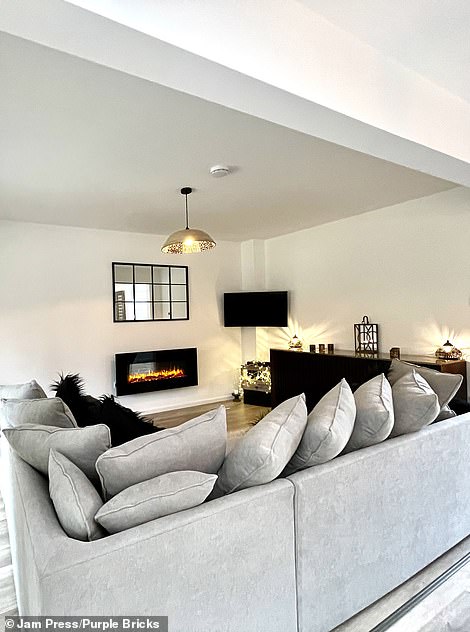 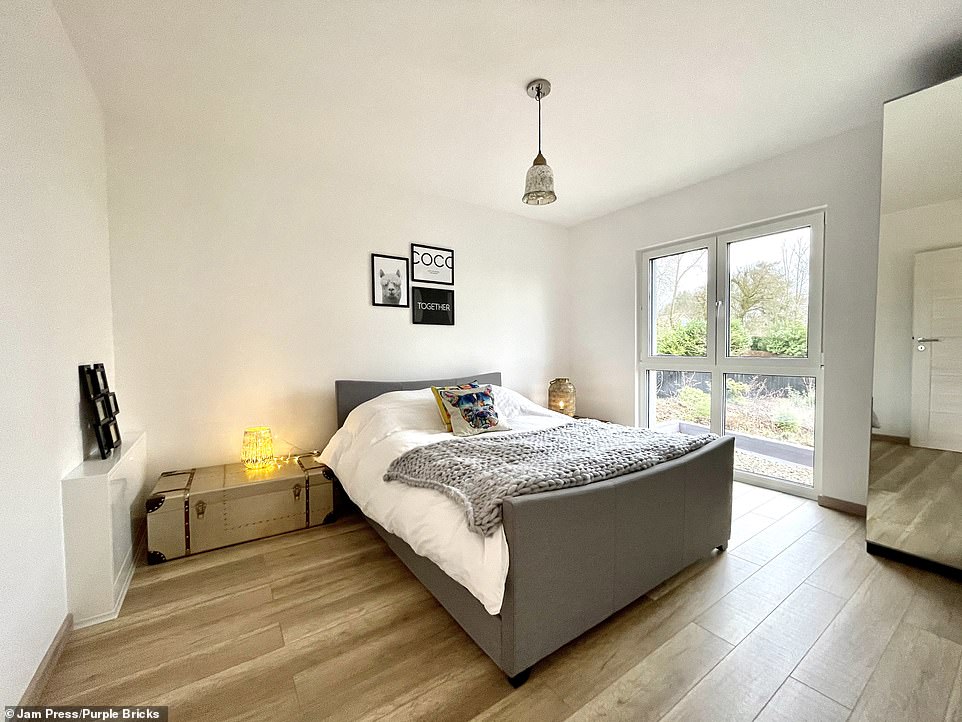 One of the home’s roomy four bedrooms; the couple now plan to sell up and move abroad after living in the house for two years 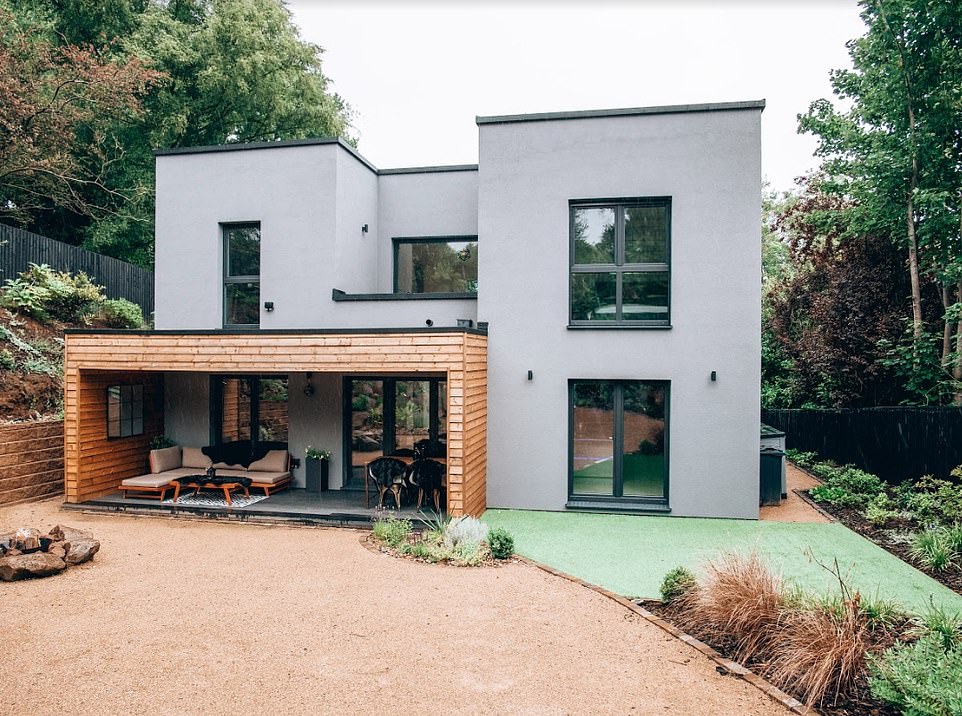 Energy efficient: the home is designed to have the least amount of impact on the environment that it can have – and is inexpensive to run, say the couple 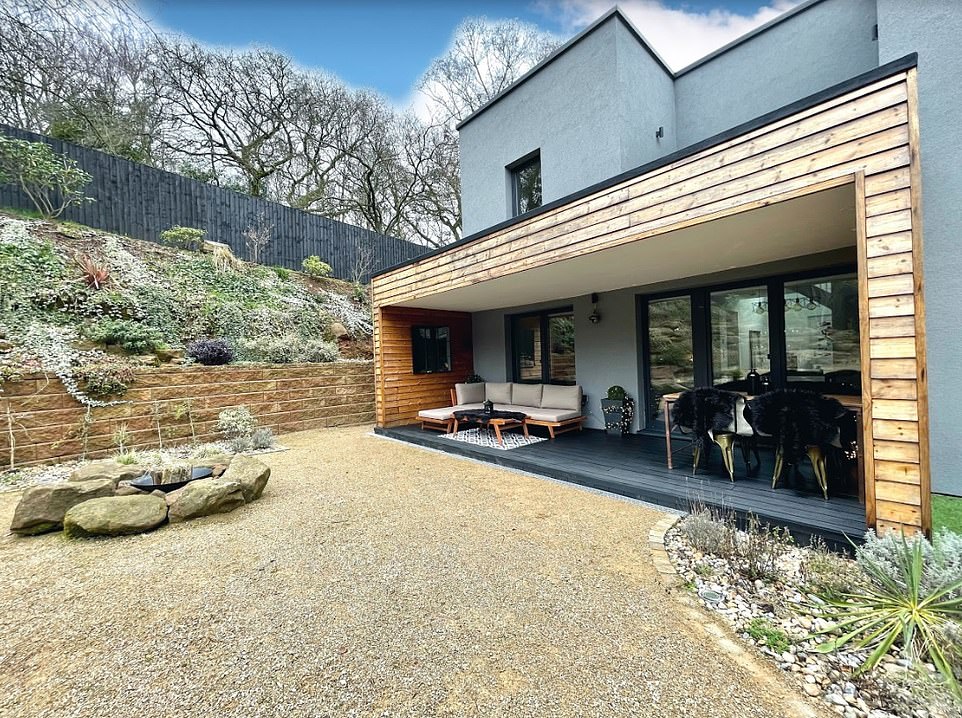 Outside, there’s an ample terrace with a covered deck space and an outdoor sofa that overlooks a landscaped garden 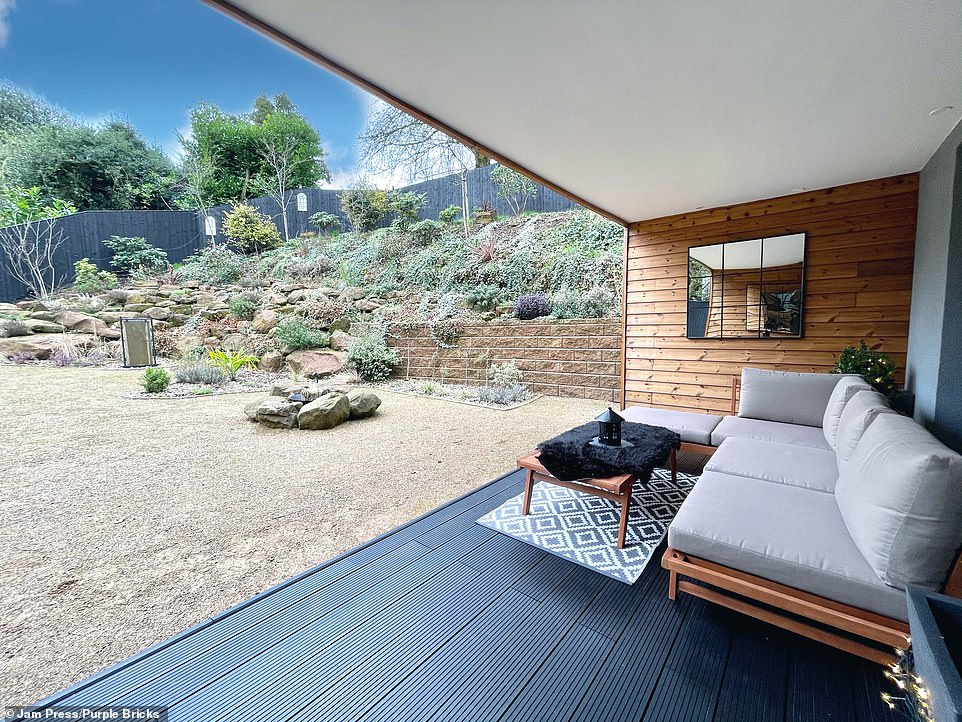 Just beyond the garden’s boundaries is Delamere Forest, in the heart of the Cheshire countryside 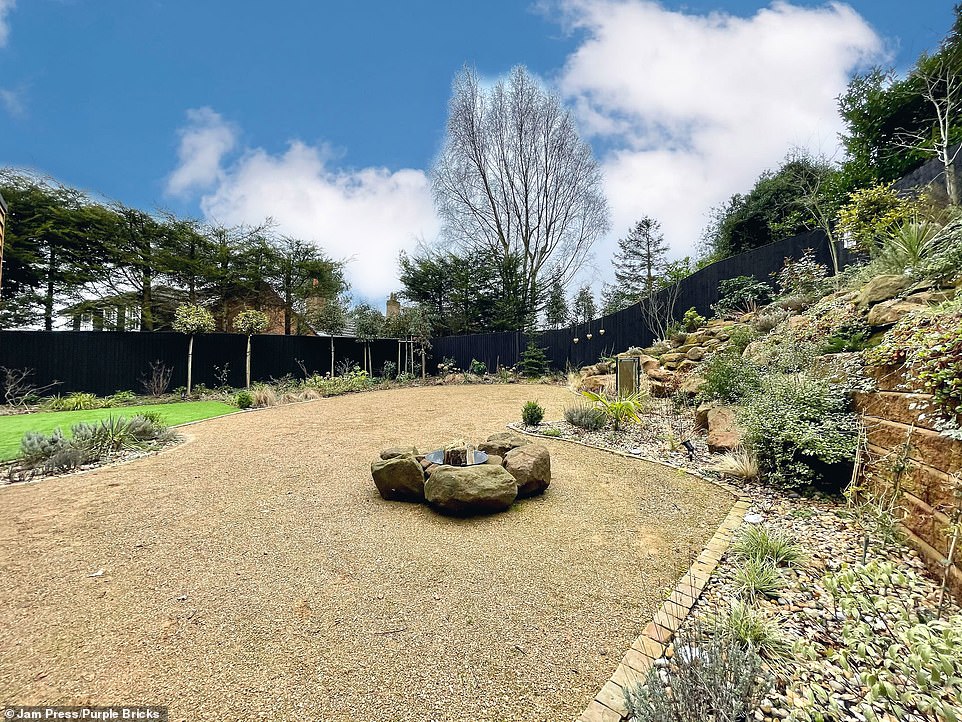 Living abroad inspired the couple when it came to design. Sue says: ‘Having lived overseas before, it was really important to achieve indoor-outdoor living and have a covered area outside.’

‘But then we got into the flow of what we wanted and agreed on what the layout should be.’

All the house components and building materials were then shipped to the property site and assembled using cranes – and in less than four days, the house already had a roof fitted and was water-tight.

The rest of the construction – including electrical and heating installation, laying the floors, building stairs, fitting bathroom furniture and tiling, was finished in under six weeks. 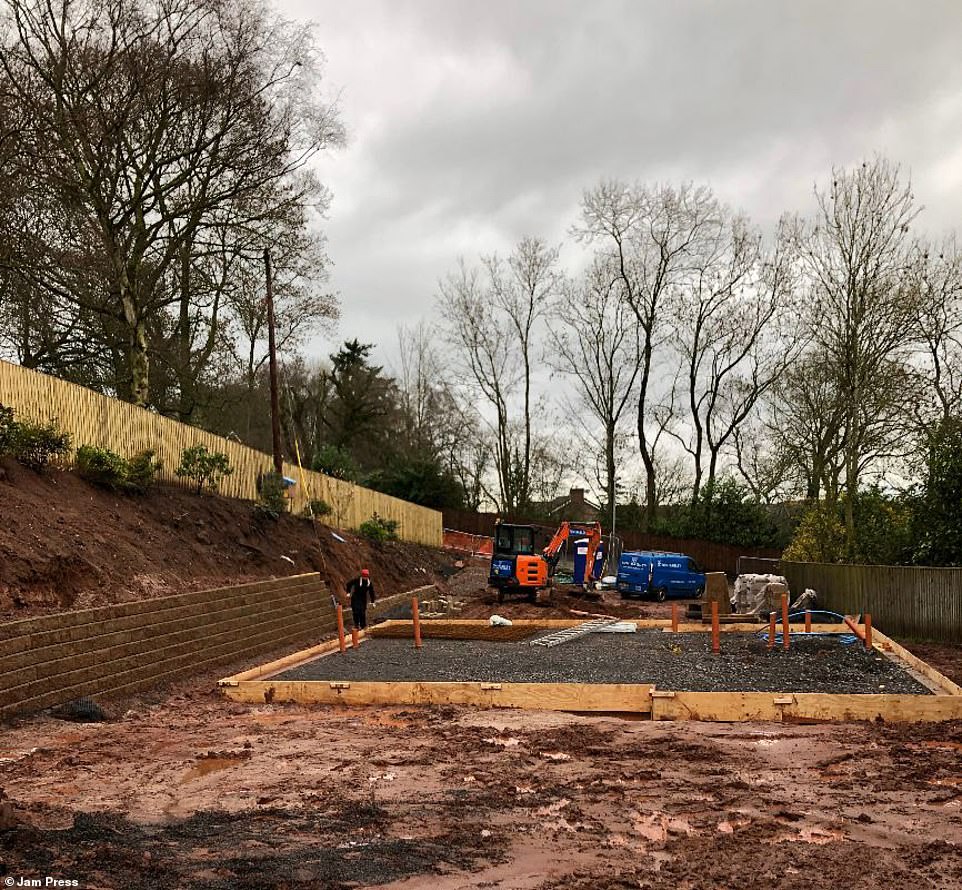 Building site: The timber frame base is slotted into place ahead of the scaffolding going up to construct the wooden frame 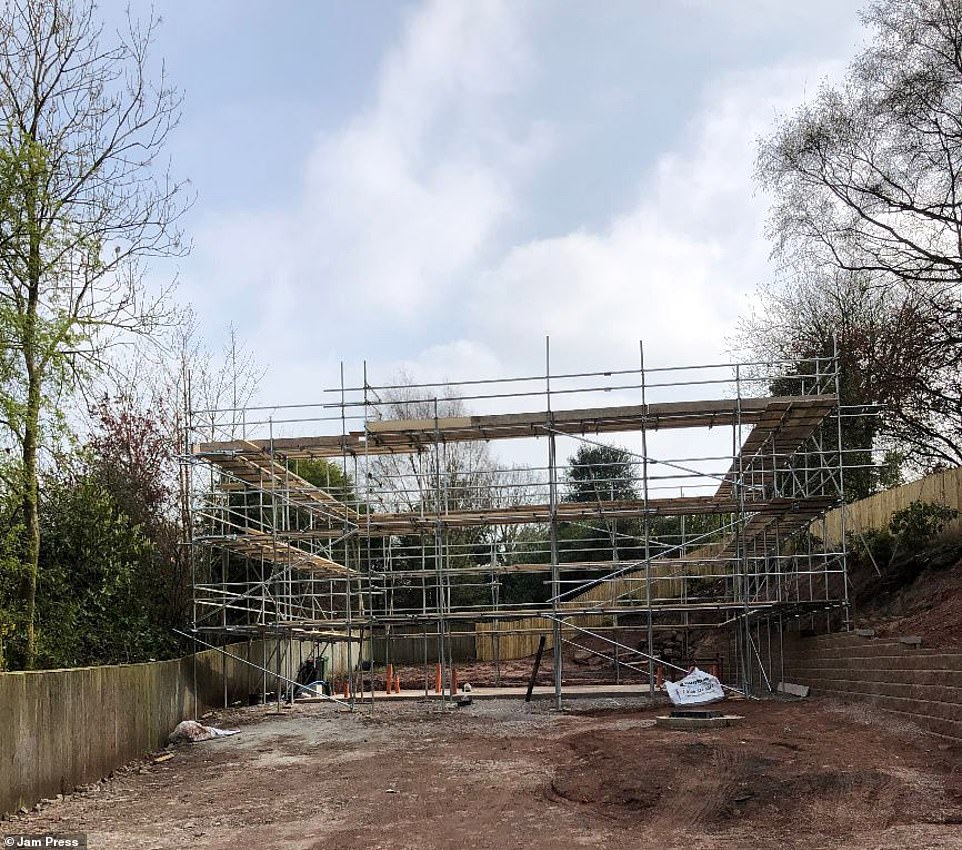 Super speedy: In less than four days of the house components arriving at the site, the home already had a roof fitted and was water-tight

The super-quick build time even included the final touches with all the painting and decorating of the house done within six weeks too.

Living abroad inspired the couple when it came to design. Sue says: ‘Having lived overseas before, it was really important to achieve indoor-outdoor living and have a covered area outside.

‘I love to cook but don’t like to feel as if I’m closed away, so having an open plan space was important. 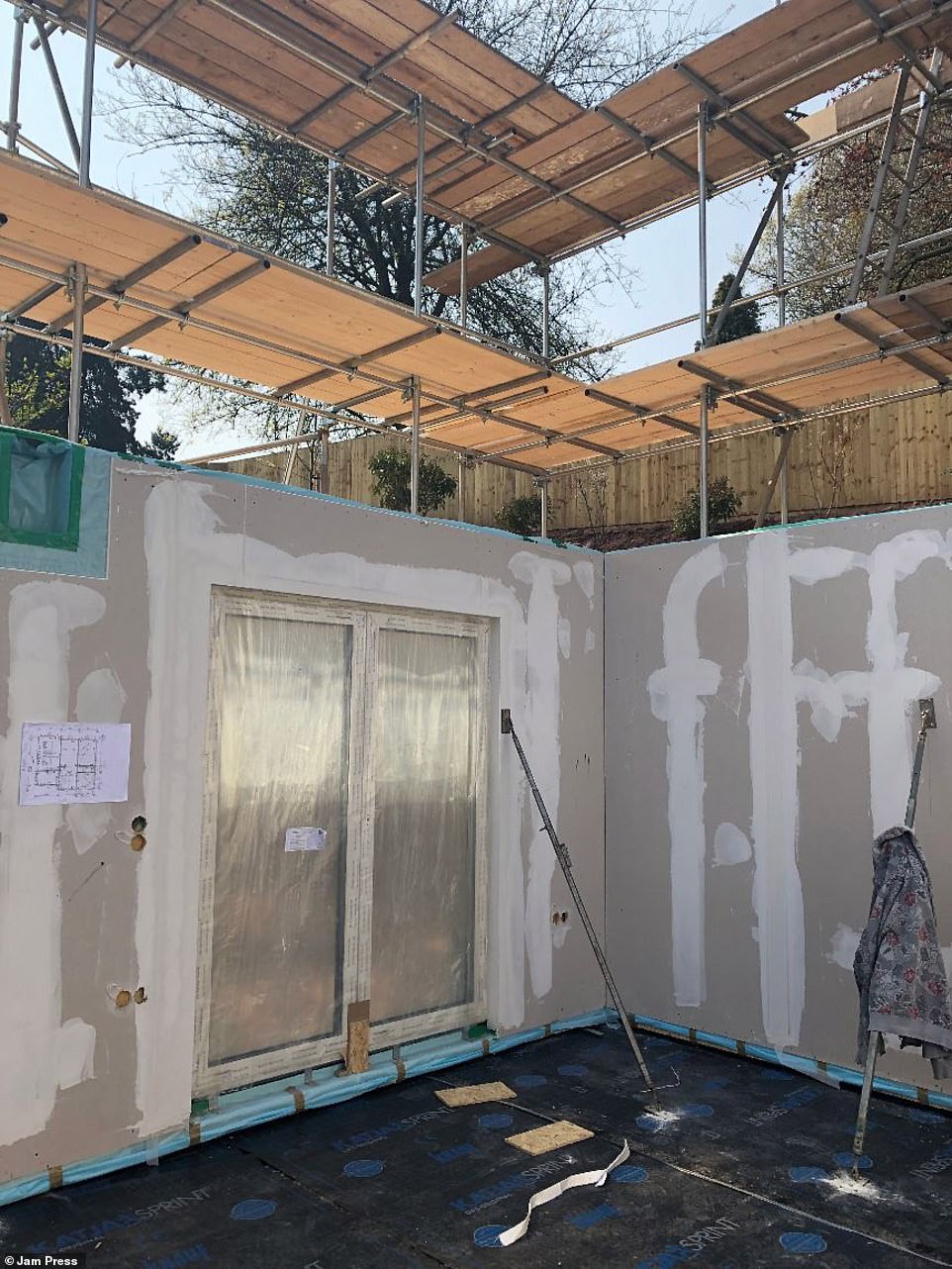 The interior walls going up during the build; the project was designed by engineers who create all the parts for a home, which can then be fitted together on a different site after shipping 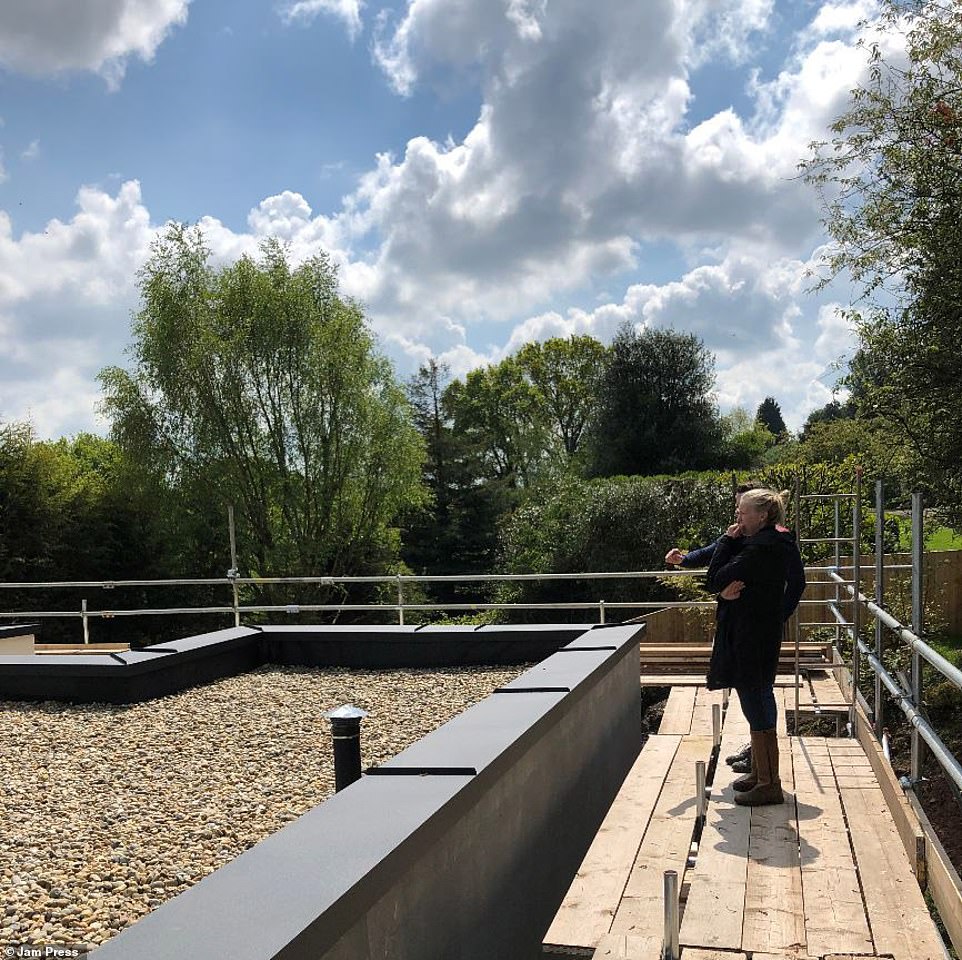 Taking shape: The couple hope someone else will now enjoy the home they dreamed up – and have put it on the market for £825,000 through Purple Bricks

‘Our focus was to have eating and entertaining areas both inside and outside. We also managed to create flexibility in the home by using one room as an office and a gym – which was particularly great when we were in lockdown.’

It is currently on the market for £825,000 through Purple Bricks as the couple are planning to move abroad.

“This property is so special with so many unique features,” said Leah Connor, Purplebricks local property expert.

“If you love walking and being in a rural setting then the location is perfect. You are also within a 15-minute drive of the roman town of Chester which offers fantastic shopping facilities and global eateries.’