Prime Minister Scott Morrison has sparked an election fight on political corruption by backing former NSW premier Gladys Berejiklian for a key federal seat despite claims he is undermining a state investigation into her conduct.

Liberals are split on the plan to vault Ms Berejiklian into the seat of Warringah in the hope of toppling independent Zali Steggall, with some thinking it will widen the election row over a stalled proposal to create a national integrity commission. 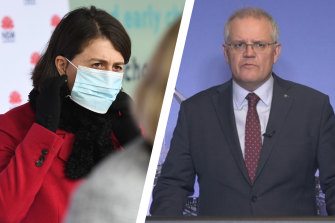 “He’s dug a hole for himself and now he’s digging even further,” said one Liberal of the Prime Minister’s decision to back the former premier when she was being investigated by the NSW Independent Commission Against Corruption.

Several federal Liberals supported the decision, however, on the grounds that Ms Berejiklian remains relatively popular with voters and the party is struggling to find a strong candidate to achieve the 7.2 per cent swing it needs to regain the seat on Sydney’s northern beaches.

Mr Morrison strongly endorsed the former premier on Monday by blasting the “shameful” treatment she received from NSW ICAC, which could still be investigating her conduct with former state colleague Daryl Maguire when the election campaign begins.

“There’s no suggestion of criminal conduct by Gladys Berejiklian,” Mr Morrison said while campaigning in the eastern Sydney electorate of Wentworth, where Liberal MP Dave Sharma is being challenged by independent candidates.

“We’ve seen, you know, recordings of private conversations, detailed, intimate things that were paraded around in the media. What was that about? Was that about shaming Gladys Berejiklian? I thought that was awful.

“What I found is that Gladys was put in a position of actually having to stand down and there was no findings of anything. Now, I don’t call that justice.

“She’s a person I’ve always found to be of great integrity, and if she wants to have a crack at Warringah for the Liberal Party, I suspect the people in Warringah would welcome that. I’ll let the people decide.”

The ICAC said on October 1 it was investigating whether Ms Berejiklian engaged in conduct that involved a conflict between her public duties and private interests because of her personal relationship with Mr Maguire, which she kept secret from colleagues and staff while making financial decisions about grants that could help him.

Former NSW premier Mike Baird told the ICAC on October 19 he was “incredulous” when he learned of the five-year relationship and believed it should have been disclosed.

An exclusive survey published in The Sydney Morning Herald and The Age last month showed many of the state’s voters continued to have some sympathy for Ms Berejiklian, with 54 per cent saying they “still like and respect” the former premier. The results were based on 515 respondents in the Resolve Political Monitor.

Labor leader Anthony Albanese avoided a direct comment on Ms Berejiklian but Labor climate spokesman Chris Bowen said the Prime Minister’s criticism of the ICAC inquiry was “disgusting” because it undermined the institution.

“If you are corrupt, you betrayed the Australian people and betray your party – you deserve to be dealt with and jailed if appropriate,” Mr Bowen said. “We welcome ICAC looking at people in the Labor Party. We don’t criticise the ICAC for doing so, we defend their work and protect them.

“It is absolutely outrageous that the Prime Minister of the day has undermined the ICAC and not just undermined their work on Gladys Berejiklian but undermined every single inquiry and investigation and finding that the ICAC has brought down.”

Ms Steggall said Mr Morrison’s remarks were “quite extraordinary” because he inferred the investigation was insubstantial when it was about integrity and trust in government.

“I think it’s quite telling that senior people in the Liberal Party are saying that this doesn’t matter, that the seriousness of ICAC is simply irrelevant to them,” she said.

“And it says how much they are out of touch with public expectations around integrity and trust when people want politics to be cleaned up.”

The NSW division of the Liberal Party has called for nominations for Warringah to be received by January 14. While the ICAC inquiry will continue past that date, submissions from counsel assisting are due by December 20 and could signal the issues for Ms Berejiklian.