The Morrison government has overlooked Australian manufacturers to favour cheap overseas suppliers as it shops for millions of face masks, gowns, gloves and other personal protective equipment.

The Health Department has issued a tender to replenish the national medical stockpile, with some items due to expire in coming months while millions have been sent to aged care facilities, pharmacists and GP practices. 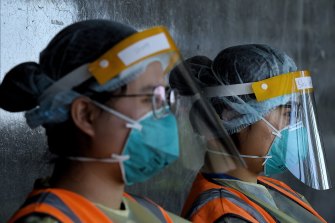 Australia Institute economist Jim Stanford said the failure to prioritise local manufacturers showed the government had not learned the lessons of 2020, when “we were caught flat-footed as the pandemic hit”.

“Without a deliberate effort to support Australian manufacturing, it’s almost certain that this production will go overseas to the lowest-cost producer,” Dr Stanford said.

“The government said the pandemic was ‘forcing a rethink’ of our reliance on low-cost global supply chains, but this tender shows they’re still stuck in their bad old ways.”

Prime Minister Scott Morrison used a speech at the National Press Club in October to declare “we make things in Australia” and launch a national manufacturing strategy.

The decision to put the national medical stockpile replenishment out to a competitive tender stands in opposition to the Senate Economics References Committee’s recommendation that all government tenders “maximise the use of local suppliers and manufacturers”.

The Labor-led committee’s inquiry into Australia’s manufacturing industry handed its report to the government on February 7, four days before the tender was published.

A Health Department spokesman said tenderers “are required to demonstrate value for money and how their tender will benefit the Australian economy”.

But, Dr Stanford said, the approach could end up costing the taxpayer more if faulty items were sourced again.

“It doesn’t turn out to be cheaper, once you’ve taken into account the extra cost of making up for quality failures from low-cost foreign operations,” he said.

In 2020, the Health Department scrambled to buy face masks from overseas amid global shortages, only to dispose of batches that failed a post-market review by the Therapeutic Goods Administration.

“To put out a tender now, with no reference to domestic content and Australian capacity just sets us up for shortages,” Dr Stanford said.

“We have to be able to produce essential medical supplies in Australia.”

Opposition spokesman for industry and innovation Ed Husic said the tender “just shows the Morrison government has learned absolutely nothing from the last two years”.

“They previously swore we wouldn’t be caught short of critical medical items, yet here they are doing nothing to work with local industry to ensure we avoid this occurring again,” Mr Husic said.

“Aussie companies struggle to break into the local market because of this government’s lack of belief in Australian industry.”

A Department of Industry spokeswoman said the government was investing in a range of medical products made in Australia, including drugs, vaccination patches and rapid antigen tests.

Local businesses “are accessing procurement at record levels under the policies of the Morrison government” and made up the majority of all contracts awarded, the spokeswoman said.

Labor is taking a “Buy Australian” plan to the coming federal election, vowing to “use government procurement and purchasing power to back Australian manufacturers wherever we can.”

A Health Department spokesman said the government had deployed more than $2.6 billion worth of PPE from the national medical stockpile since the pandemic began.

“Whilst the department does not publicly disclose the contents or nature of the national medical stockpile, it is expected that some products, such as masks, can expire prior to deployment and the department takes action to minimise this through appropriate stock control,” the spokesman said.