The Australian government has ordered the evacuation of its embassy in Kyiv amid concerns Russian troops are preparing to invade Ukraine.

Foreign Minister Marise Payne said the government had directed the staff to leave the embassy.

“Given the deteriorating security situation caused by the build-up of Russian troops on Ukraine’s border, the government has directed the departure of staff at the Australian Embassy in Kyiv and temporarily suspended operations at our embassy in Kyiv,” Senator Payne said in a statement on Sunday.

“We will be moving our operations to a temporary office in Lviv.” 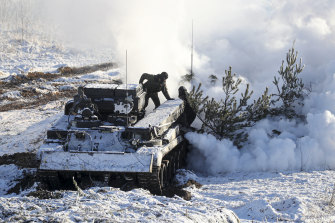 Military exercises involving Russian and Belarus forces on the border with Ukraine.Credit:AP

“Australia continues to support Ukraine’s sovereignty and territorial integrity. We remain in close contact with our Five Eyes and other like-minded partners on the ground.”

Labor leader Anthony Albanese said there was no excuse for Russia’s actions.

“Russia should back off,” he told Sky News. “The threats and intimidation that’s occurring to a sovereign state like the Ukraine are entirely inappropriate in 2022, and we respect Ukraine sovereignty and that should be respected by all including by Russia.”

Australians in Ukraine seeking consular assistance should call the Australian government 24-hour Consular Emergency Centre on 1300 555 135 or +61 2 6261 3305 outside Australia.

Get a note direct from our foreign correspondents on what’s making headlines around the world. Sign up for the weekly What in the World newsletter here.