Top lawyers say the Victorian government’s proposed pandemic laws will give politicians “a blank cheque to rule by decree” and run counter to basic democratic principles. 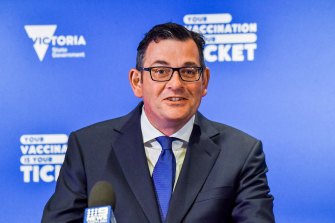 The controversial proposal, which is yet to be passed by the Legislative Council, would replace state of emergency powers, empowering the premier and health minister to declare pandemics and enforce health directions. Under the current system, the state’s chief health officer, who is not an elected official, has these powers.

Victoria has been in a continuous state of emergency since March last year, but that will expire on December 15.

The new laws would give the state government power to restrict the movement of citizens, ban gatherings, force businesses to close and impose quarantine if necessary.

The open letter, which follows criticism from the Victorian Bar, was signed by more than a dozen silks on Thursday night, including Jennifer Batrouney, AM, QC, Eugene Wheelahan, QC, Ross Gillies, QC, and Stuart Wood, AM, QC.

They argued the bill should list specific powers for specific purposes, rather than allowing a pandemic to be declared for the foreseeable future during COVID-19, and urged against issuing broad powers with inadequate checks in place.

“It is one thing to allow temporary rule by decree to deal with an unforeseen and extraordinary emergency in circumstances of extreme urgency. It is something else altogether to entrench rule by decree as a long-term norm. In our view, this is antithetical to basic democratic principles and should not be allowed to happen,” the letter said.

“We are now more than 18 months into the pandemic. It has become clear what sort of powers might be required to deal with it. There is no need to give the government of the day a blank cheque to rule by decree.”

Law Institute of Victoria president Tania Wolff shared concerns about the lack of parliamentary scrutiny, but said the bill was a major improvement on the existing framework.

The bill passed the government-controlled lower house on Thursday night 51 votes to 26. It will now be debated in the upper house where it will need the backing of three of the 11 crossbenchers.

Proposed changes include the need for health advice justifying decisions to be tabled in parliament.

Despite resistance from the Coalition and some crossbenchers, the bill is expected to pass in the Legislative Council with the support of Reason Party MP Fiona Patten, Animal Justice MP Andy Meddick and Greens leader Samantha Ratnam, who were involved in negotiations with the Andrews government.

They pored over the legislation this week, and are yet to decide on what, if any, amendments they plan to introduce. However, there could be appetite among crossbench MPs to demand a parliamentary committee, in addition to the independent advisory committee, to scrutinise government decisions.

Opposition Leader Matthew Guy told Parliament on Thursday the Coalition would repeal the law if it won the 2022 election, accusing the government of being “megalomaniacs”.

Industry Support and Recovery Minister Martin Pakula was the most senior government minister to speak on the bill in the Legislative Assembly on Thursday. He he accused the opposition of “hyperbole” and “hysteria”.

Premier Daniel Andrews this week said the new legislation, which was informed by similar laws in other states and overseas, would provide more transparency, accountability and oversight.

Stay across the most crucial developments related to the pandemic with the Coronavirus Update. Sign up for the weekly newsletter.