The new aged care minister will begin looking at the prospect of using migration to help fill tens of thousands of vacancies across the job-starved sector as both unions and providers call for permanent residency for imported staff.

Anika Wells said with borders now open, she would work with Immigration Minister Andrew Giles to develop policies to allow the recruitment of overseas workers “to meet the projected increased demand for labour and address genuine and persistent skill shortages in the industry.” 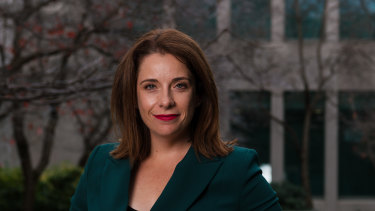 Aged Care Minister Anika Wells will consult with providers and unions about bringing in workers from overseas.Credit:James Brickwood

“While recruitment of Australians to fill roles in the aged care sector is a priority for the government, migration has historically played a role in the aged care workforce and will continue to play a role in future,” Wells told The Sydney Morning Herald and The Age.

The crisis-plagued sector has haemorrhaged workers, with previous border closures worsening skills shortages and the army being called in to help manage facilities during the pandemic.

The Sydney Morning Herald and The Age reported last month operators need almost 60,000 workers to plug the national staffing gap, with providers calling for prioritised childcare for workers, as well as migration incentives, such as help with schools and housing, to draw people back into the workforce.

Pat Garcia, chief executive of Catholic Health Australia (CHA), the country’s largest aged care body, has called for pathways to residency to induce workers to come to Australia. The body has previously recommended a moratorium on prioritising local recruitment before looking overseas.

“We’d be keen for a plan that allows foreign workers to fill vacancies on a short and long-term basis where a local workforce is not available,” he said.

“We also call on the federal government to prioritise the creation and training of an Australian workforce via real wage increases and training to assist people into aged care.”

Wells said policies would be developed in consultation with the industry and unions, while noting there were already certain skilled visa options for health and aged-care workers.

Health Services Union national president Gerard Hayes – who is leading workers’ push for a 25 per cent wage rise – said the system needed to prevent the exploitation of visa holders, but also guard against any undercutting of pay or conditions.

He described Wells’ approach as “a commonsense position that seeks to meet the industry’s needs without fuelling exploitation.”

United Work Union aged care director Carolyn Smith agreed the goal was to make sure those recruited from overseas weren’t vulnerable to exploitation.

“We’ve got to make sure where we do use migration pathways that those pathways ensure those workers are able to work without fear, and blow the whistle if they see it as necessary,” she said, adding any process should have a “pathway to permanency”.

“This is a conversation we are keen to start with Labor.”