Every time Scott Morrison assumed another ministry, the process was very simple: his staff sent a single sentence to the governor-general, who signed it and sent it back.

The plan was hatched back in March 2020 after the then-prime minister, his health minister Greg Hunt and attorney-general Christian Porter realised with astonishment the extent of the powers available to the health minister to stop the spread of COVID-19. 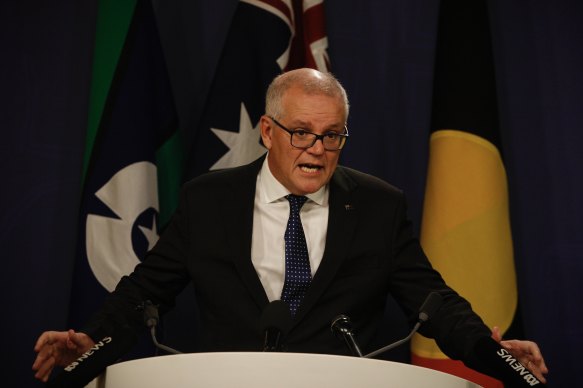 Former prime minister Scott Morrison did not have to visit the governor-general in person to be appointed in charge of other ministers’ departments.Credit:Dean Sewell

The Biosecurity Act gives the health minister – and, crucially, the health minister alone – the power to order anyone to do anything the minister thinks is necessary to prevent a disease entering Australia or to stop its spread. It’s an offence not to comply.

The laws were shepherded through parliament in 2015 by Barnaby Joyce, at the time the agriculture minister.

“It is expected that the human health provisions contained in the bill will be seldom used,” he said upon introducing it to parliament.

In 2020, those extraordinary powers looked necessary as the mysterious virus felled thousands of people around the world.

Morrison, Hunt and Porter designed a lengthy protocol that would ensure if Hunt were to invoke the Biosecurity Act, he had to provide written medical advice and tell cabinet’s national security committee and the chief medical officer ahead of time.

But they were still concerned about the extent of the powers and decided they needed a plan for how it would work in the event Hunt succumbed to the virus.

Porter came up with a specific solution for that specific problem: Morrison would ask the governor-general to appoint him to administer the Department of Health.

The intention was to decentralise the portfolio and powers amid the fast-moving and unpredictable events of the COVID-19 pandemic.

It is usual practice to have more than one minister appointed to a department; even the most junior ministers in a portfolio technically have powers over all the legislation their department administers.

But it’s not usually secret and by convention ministers with narrowly defined roles stay in their lane. It’s also unusual for a prime minister to be given powers over someone else’s department.

The move was discussed at the special COVID national security committee of about half a dozen ministers.

On March 14, 2020, Governor-General David Hurley signed the one-sentence instrument. This gave Morrison the power to administer all legislation that came under the Health Department’s remit.

Many of those involved say they can’t recall now if anything was made public at the time; they were too busy to pay attention.

After the revelations this week, former ministers have pointed to hints at a press conference Morrison gave alongside chief medical officer Brendan Murphy on March 18.

He announced the governor-general had declared a human biosecurity emergency in recognition of the need for the government to take actions “under the health minister and myself as prime minister” to limit the spread of the coronavirus. Few, if any, reporters present would have been au fait with the intricate details of the Biosecurity Act to realise this was unusual.

Morrison said on Wednesday he hadn’t wanted to alarm the public or undermine confidence in his ministers by revealing he was acting as their backstop.

“I think there was a great risk that in the midst of that crisis those powers could be misinterpreted and misunderstood,” he said.

Hurley confirmed this on Wednesday, saying recommendations to appoint ministers are not by convention considered by the federal executive council – a body that includes the governor-general and at least two ministers, which oversees the signing of acts into law and making statutory and judicial appointments among other things.

It was up to the government and the prime minister’s department to make those appointments public, he said.

Several former ministers, including Michael McCormack who was deputy prime minister at the time, have said this week they were aware of Morrison taking on the health responsibilities.

However, senior ministers were unaware Morrison then used the same template drawn up by Porter to appoint himself to administer other departments – including in Porter’s portfolio of industry and science a year later.

On March 30, 2020, Hurley appointed Morrison to administer the Finance Department, at the time led by Mathias Cormann.

Cormann, now the head of the OECD, says he only found out about it when he read it in the newspaper last weekend as detail revealed in an upcoming book. Morrison says he told two journalists who were writing the book, Plagued, about the health and finance arrangements in 2020. He said he genuinely thought his office had told Cormann what was going on.

Neither Josh Frydenberg nor Karen Andrews knew that on May 6, 2021, the governor-general gave Morrison responsibility for their departments of Treasury and Home Affairs, respectively.

Morrison said on Wednesday that once it became clear the pandemic was continuing, “we took the precaution” to put back-up “in these other important portfolios where there were unilateral decision-making powers of ministers that were not subject to cabinet”.

He cited the preparation of the budget – which was the second Frydenberg handed down in six months – and the negotiations Morrison was involved in to strike the AUKUS defence deal as “very significant things taking place in addition to managing the pandemic” at that time.

“These matters were added to the reserve emergency powers on an administrative basis. They were never used. And in hindsight, I think they proved to be unnecessary,” he said.

Then-resources minister Keith Pitt was only told after the fact that Morrison had assumed responsibility for his portfolio in 2021. Morrison says he would do that again, even without a pandemic, because he felt it was necessary to overrule Pitt and refuse a licence to explore of oil and gas off the NSW coast. He didn’t want to sack Pitt, Morrison said, so he took on his powers instead.

McCormack has recalled discussing the decision on the project known as PEP11 in a meeting with Morrison and Pitt, who were clearly of different minds.

“It was a situation that, you know, at the end of the day, as I said to Keith Pitt, ‘Well, he is the prime minister’,” he said.

That move was obliquely referenced via Morrison being the sole person named on press releases that said, “I have made the decision.”

The company behind the project appears to have been the only ones who noticed the nuance; it wrote to the Australian Government Solicitor asking how he had the authority to make the decision. It was told on May 31, 10 days after Morrison was ousted at the federal election, he had been appointed to administer the department.