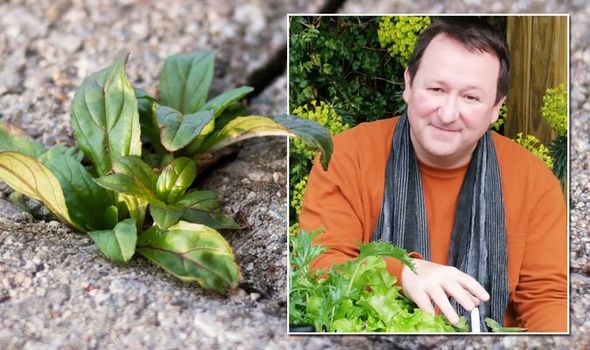 Gardener’s are tormented by weeds, which seem to endlessly pop up among driveways, patios and paths. However, weeds can be effectively burned to death.

“There are even some really good electric weed burners as well,” he explained.

“They come with a metal funnel at the end. You put the metal funnel over the top of the weed, and press. Then it burns the weed.

“Depending upon the type of burner – not all of them but most of them – they will also burn the weed down into the roots.

“Some will only just burn the top off, which means you’ll have to keep doing it.

“It is a good way of doing getting rid of weeds without again, using any sort of pesticides or insecticides.”

READ MARK LANE’S LATEST COLUMN: ‘The envy of your neighbours’: What to plant for autumn-winter pot displays – Mark Lane

Burning weeds is a form of what is referred to as “non-chemical control” of weeds. The weeds are scorched away.

A study from the University of Minnesota Extension, an education centre focused on science-based study and available to the public, burning works best on young plants and broadleaf weeds.

It works especially well when applied at least twice a season.

The aim to not to light the plant on fire but to blast it with intense heat, which will travel down into the route.

Before using a weed burner, make sure you remove debris from the area, especially anything that will catch alight.

It should only take a few seconds to kill the weed with the method.

There is an important thing to remember when using this kind of method, and that is not to use this method on weeds in your flowerbed.

Not only will it ruin the quality of the soil, but it may also kill surrounding plants.

Perennial weeds are more resistant to burning and may need numerous passings.

Other forms of non-chemical weed control include old fashioned hand-pulling, although this is difficult on drives and can be intensive and unsuitable for certain gardeners.

Another method is using a weed barrier, which can come in various forms.

This includes mulching, which Mark has previously recommended to gardeners.

He suggested “a five centimetre layer of normally organic matter” over your flower bed to keep weeds down.

A mulch stops light from getting to the weeds, killing them. This means the weeds distribute their nutrients to the soil, improving it for your other plants.

Mark recommended his own DIY leaf mould mulch, simple and free to make.

Mark explained how to use a bin bag and garden debris to create a mulch.

Collect deciduous leaves from the garden, preferably after it’s been raining. Otherwise, moisten the leaves.

Then tie them in a bin bag and leave them for a year.