There’s a new TikTok trend popping up on everyone’s "For You" page that has many users doing a double take. TikTok’s "Make People Think It’s A Photo" challenge is definitely that — a challenge — as it requires all subjects to remain perfectly still. If you’ve got a steady hand, are great at posing, and love to get creative, you may want to try it out for yourself.

The "Make People Think It’s A Photo" challenge (aka #NotAPhoto) is all about TikTokers freezing in place to make it look like their video is a still photo. When the music drops, they move, revealing that it was a video the whole time.

To take the trend to another level, some users are setting up their "photos" with props to make it undeniably a picture. By using household items like plastic wrap and string, you can pretty much fool anyone into thinking your video is a freeze frame. You may also want to get yourself a tripod if you know you can’t keep your arm steady. There are other tips and tricks you can learn just by scrolling through the #NotAPhoto tag on your phone, which has more than 260 million views. These eight TikTokers doing the "Make People Think It’s A Photo" challenge really nailed it as well, so maybe they can inspire you to create your very own.

1. Use Plastic Wrap As Water

2. Get Your Dog To Stay Put

To really impress your friends, have your dog try out this trend. Show off just how well they can stay put by having them freeze in place. TikToker @kona.thehound did this with their dog, Rambo, who looks like he’s in the middle of a walk. Other good doggos who really nailed this trend with some tennis balls are @goldenretrieverlife and @honeytheiggy.

Blinking and taking big breaths will instantly give it away that it’s not a photo, so try your hardest to keep your eyes open and breathing to a minimum before the beat drops. TikToker @lolastussy does this really well. Even the comments praise how well @lolastussy nails it by saying things, like "I honestly wouldn’t have known if u didn’t say it."

4. Put Some Popcorn On A String 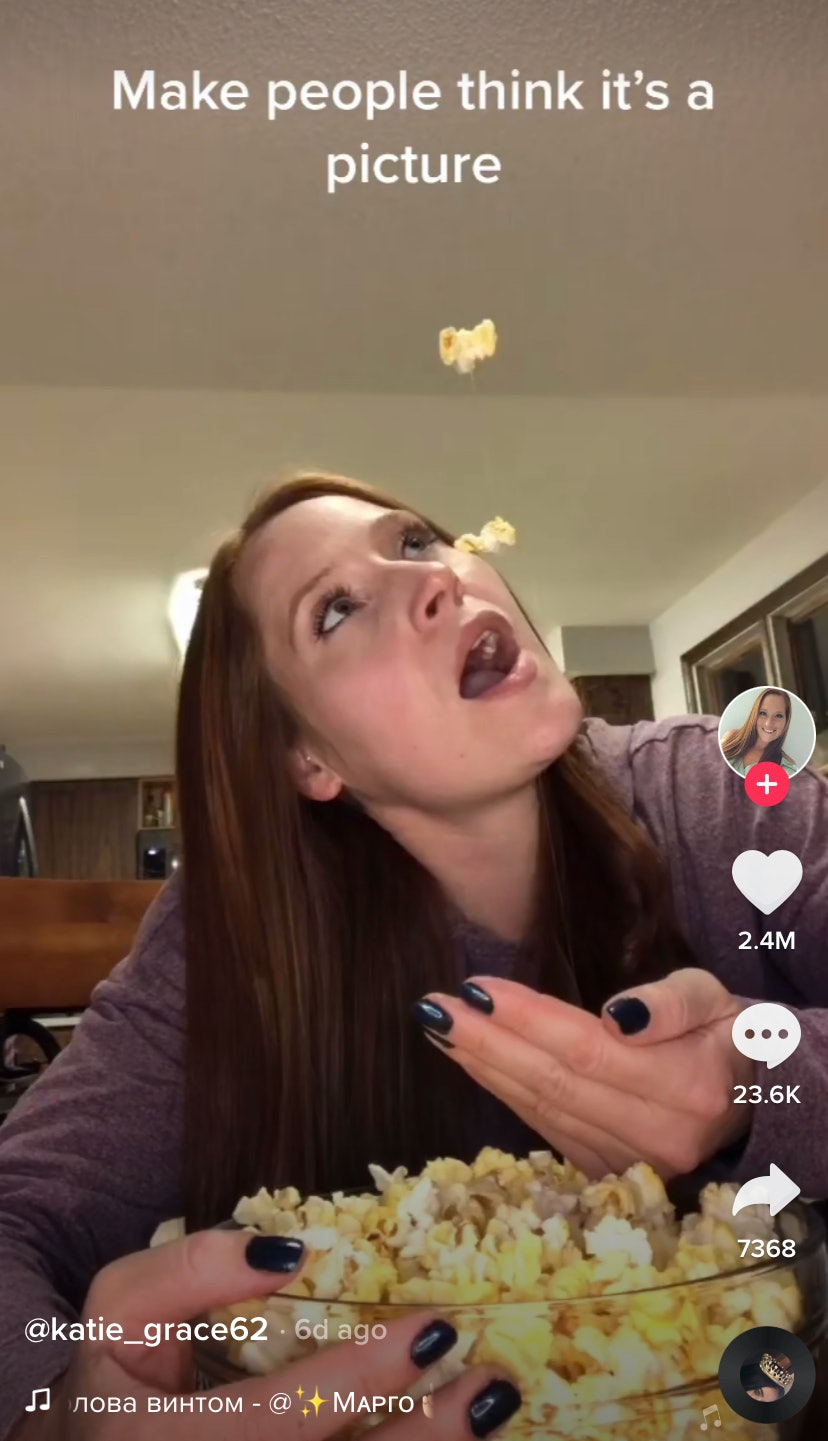 TikToker @katie_grace62 really takes this trend to the next level with some popcorn and string. By hanging the popcorn up, it really looks like Katie is tossing some into her mouth for a picture. You can do the same with some fishing line at home.

5. Make Yourself A Thick Smoothie

Use the "Make People Think It’s A Photo" challenge as an excuse to make yourself a delicious smoothie. That’s what TikToker @bearenger did with the trend. By holding a thick enough smoothie over your head, it’ll stay in place and give off the illusion that it’s a picture.

6. Pose With Your Cat

Just like dogs have gotten in on the trend, cats have attempted it as well. Pose with your cat just like TikToker @pekyramona. If you have a chill cat who doesn’t move around much, it’ll work perfectly. However, if you’ve got a restless cat, try this trend out when they’re taking one of their many catnaps.

7. Take A Bite Of Something When The Beat Drops

Instead of just posing and then moving, tell a story with your #NotAPhoto TikTok. One easy way to do this is to pose like you’re about to take a bite of something. When the beat drops and you can move again, that’s when you can finally eat. TikToker @kashhit did just that with some chips.

You really want to make it look like a photo at first, and what’s more realistic than a candid photo? Record yourself in a pose that looks like just another random selfie you took. You could even look off to the side like TikToker @lynsey_melissa. The more natural it looks, the better the results.