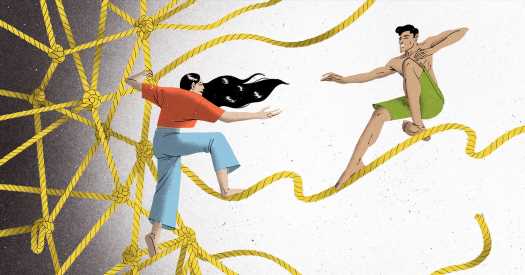 My groom-to-be stood naked on the balcony of our fourth-floor Los Angeles apartment and threw his self-portrait over the railing, his firm toffee form glinting in the sun.

We peered at the oil painting below, a textured image of him in his 20s. The gold-leaf frame boomeranged light right up to us.

“How could you do that?” I yelled, incredulous for a moment that I chose to marry this man. “That’s my favorite painting of yours.” I darted out the door — making sure to slam it — and ran to the street. Miraculously, a car hadn’t bulldozed the art.

People were watching from their balconies. A mother with a screaming toddler. My elderly neighbor who complains his place is overtaken by moths. A woman smoking a fragrant joint. I awkwardly carried the portrait upstairs and placed it back on our office wall. Alan, still sans clothes, was smiling next to a mound of suitcases.

Earlier that day, we had returned from spending the summer in Chile, where Alan was directing the photography for a movie. He went straight into nesting mode. Never mind jet lag. Never mind lunch. Since we only had a few days’ notice before our trip, we had left the place a mess. The sight of it made Alan restless.

He took out the vacuum. The pitch of the hum climbed and leveled. After scouring the floors, he scrubbed the countertops. Paired the shoes by the door. Sorted through stacks of mail. Mixed two cocktails.

Next up were the toilets. Alan peeled off his shirt, his pants, his briefs. I was no stranger to his bathroom-cleaning striptease — after we’d moved in together almost a year before, I saw his backside jut up at me for the first time as he scrubbed the tiled floor. “Why?” I would ask.

“If you wear clothes when you clean, you have to clean your clothes. I’m eliminating the middle man.”

Sipping my drink, I watched his backside joggle again. But this time, he had forgotten the scrubber. As he headed to the kitchen, he eyed the two cabinets under the bread box, their doors ajar because I had overloaded them. Alan opened them fully and let out a sigh. I knew what he was thinking.

These plastic discs signified who I had been and, more important, who I thought I would become. If I threw them away, I’d be throwing away vital parts of myself.

Ever since I sang in my first-grade talent show, I wanted — no, needed — to become a singer/songwriter. Some people dream of marrying their true love; I dreamed of marrying a very precise vision of my future. I sang at my first funeral when I was 11, and in my teens and 20s, funeral singing was my steadiest gig. After I graduated from college, a friend and I started a music group in Philadelphia called Almost Awake. We played at funerals and sometimes weddings, but also performed original songs at clubs and cafes.

Finally, I went for it. While my close friends were pooling their cash reserves to orchestrate extravagant weddings, I drew upon savings from odd jobs and a reckless amount of credit to make a demo with a Grammy-nominated producer in Los Angeles. I thought that if I made the biggest possible investment in my music, I could subsist on my art. But instead of a record deal, I was left with debt, the heartbreak of not making it, and hundreds of CDs no one had listened to.

Ten years later, in the kitchen cabinets of my Los Angeles apartment, I stored the remaining 500 CDs, half of the 1,000 I’d ordered. When I moved from Philadelphia to be with Alan, I shipped those five boxes of CDs on an Amtrak train, along with 22 other boxes that contained my belongings.

Alan emphatically waved his scrubber at the cardboard protruding from the cabinets. “Your songs are saved to our hard drives and the cloud,” he said. “Nobody even owns a CD player. Besides.”

“Besides, you’ve been writing new songs,” he said. “You’re going to write newer songs. You’re going to get better and better and create art that represents the new you, not the 25-year-old you. Don’t you think you’ve changed a lot since then?”

I reached into the box that had unlatched on its cross-country trip without me. I cradled a CD. On the cover was my younger self from the torso up, wearing makeup I didn’t know how to put on, dressed in a sheer green sweater I couldn’t afford. I loved this version of myself — for her devotedness to her craft, for her absurd certainty, and for her promise to be true to only one outcome. None of the unimagined ones would do.

My 35-year-old face, reflected in glossy plastic, was superimposed over my 25-year-old eyes. For a moment, they matched.

“These pieces of plastic aren’t the art — you are,” Alan said. He opened his mouth again, then closed it.

“Hand them out on Hollywood Boulevard like all those aspiring musicians.”

“Do you think Picasso coveted his art like this?” he asked. “He painted the same thing over and over again. He sold those, then made more. He couldn’t get rid of them fast enough.”

“I bet you’d never get rid of a painting you made in your 20s,” I said. “Your style’s changed, but still, you wouldn’t trash your old art.”

Alan didn’t say a word. That’s when he grabbed his painting off the wall, rushed to the balcony, and catapulted it 40 feet below.

When I first met Alan in Philadelphia nine years ago, I was both intrigued and aghast to learn about his fascination with letting go. He makes movies because they fade out. He jots short poems on poster board and posts them throughout cities with flimsy Scotch tape. If he later sees one strewn on the dirty sidewalk covered in footprints, this man who cleans the bathroom naked is elated. He takes photos of billboards with images in mid-decay, spellbound by their exquisitely disintegrating letters.

He embraces what I hate — the fleetingness of our dreams and achievements, of endeavors that take lifetimes to build, just to crumble to nothing.

When death came up in conversation one day, Alan said, “I’m excited for it. When it happens, I plan to be 100 percent present as I go.”

When I ask him how he can love the fact that our art, and the people who create it, will eventually be gone, he answers matter-of-factly, “I love the universe the way it is.”

The universe is seldom what we think it will be. For years, I’ve been fighting against that truth. It’s a fight I won’t ever win, but I’m starting to think maybe there’s magic in the mystery of our transience — just like an infant whose future we hope and plan for, but can never determine. Isn’t it mystery that allows for hope? And if we knew exactly who we would become, would our lives turn out as beautiful?

After all, when I made my demo, I didn’t think I’d eventually be living in Los Angeles for love and not for music. I also didn’t think funeral and wedding singing would stick, that I’d continue to be summoned to witness life’s big transitions, or that my pop music pursuits would dwindle. I didn’t picture myself clinging to 500 compact discs, each identical square redundant, obsolete. I didn’t think a pandemic would pause our lives — and that those CDs, which were intended to be the doorstep to my future, would become the cause of a recurring fight.

When the coronavirus confined us at home, and Alan and I were laden with the disappointment of unemployment and our postponed winter wedding, he embarked on another naked cleaning spree. I stood face-to-face again with my resistance to let go of the CDs. Alan, as determined (and nude) as ever, held up an abstract painting he’d made with his nervous quarantine energy.

He ripped it up in front of my eyes. I stared at the scraps of red, gold and white.

An hour later, he surprised me with a new painting, made from remnants of the last one, puzzled together in pieces I never would have thought could fit. It was beautiful.

Even though it took Alan years to add layers and touches to his self-portrait, he could dispose of it in a moment. And while my spectator neighbors might have thought Alan and I were breaking up, I was falling more in love. The fact that Alan draws hope, humor, even enchantment from the world as it is, despite its letdowns and losses, inspires me to embrace the mystery of what is to come.

He also inspires me to re-examine the mystery in what’s already happened.

All those years when I sang at funerals and weddings, there were sacred, momentary echoes that those love ballads and mourning songs left behind. I sang in vast churches, wooded backyards, muggy funeral parlors, snowy cemeteries. As my voice rang out, new truths washed over me — finally I’m starting to see them. I can view the universe as it is; I can hold and behold both grief and beauty. Those songs were like the shine of sun bouncing up from Alan’s gold frame. They were flashes that happened so fast, I could only detect their dimming. And yet surrendering to their end evoked something I can only describe as a feeling of eternity.

Someday we must let go of all that is precious — our loved ones, dreams that never materialized, and what we made in and of this world. These truths birth our common pain, our collective grief. They don’t always make sense, but Alan leans into these mystifying, often terrifying truths with abandon. And this gives me courage.

It’s true that I once thought I would be someone, but I am now someone else — someone more real, more alive, more present.

It is true that, someday, Alan’s paintings will no longer exist, whether Alan destroys them or they decompose. Someday not one person will remember the glimpse of light they saw when I sang “Amazing Grace” at a funeral or “Grow Old With Me” at a wedding. Someday I might get that record deal, but I’m not counting on it.

For now, my CDs remain in our cabinets, their doors ajar. I’m not yet ready to part with them. But when this pandemic is over, and Alan and I can finally have our wedding, I might just head over to Hollywood Boulevard on the way and hand some out. I wonder what will come of them.