A PRETTYLITTLETHING customer was left baffled after she was told she could expect her order in 1955.

Zoe took to Twitter where she shared screenshots of the bizarre update, joking that her clothes had been “sent to the past.” 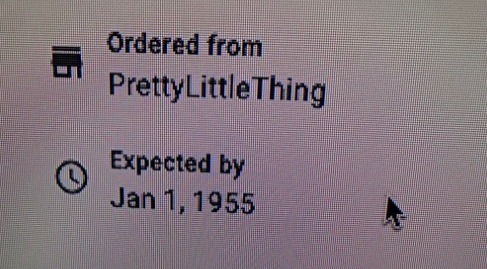 The message said that Zoe could expect her package on January 1 1955.

Captioning her tweet, she wrote: “Pretty Little Thing sent my clothes to the past. Some civil rights activist boutta be in bodycon dresses (sic).”

The tweet has since gone viral amassing over 60,000 likes at the time of publishing, leaving Zoe’s followers in stitches.

Responding to the tweet one wrote: “Didn’t know their delivery method was TIME TRAVEL 😭😭😭”

“The laugh I let out was disgusting. I hope you get your items”, added another.

A third joked: “Some one’s grandma is looking mighty fine at those sit ins.”

And even PLT founder Umar Kamani weighed in, tweeting: "We pride ourselves on pushing the boundaries."

In other fashion fails, this PrettyLittleThing customer claims her thong arrived covered in blood.

And this mortified woman buys backless jumpsuit online – but it doesn’t even cover her bum in embarrassing wardrobe malfunction.

Plus this PrettyLittleThing customer was horrified when her boots "arrived covered in dog poo."