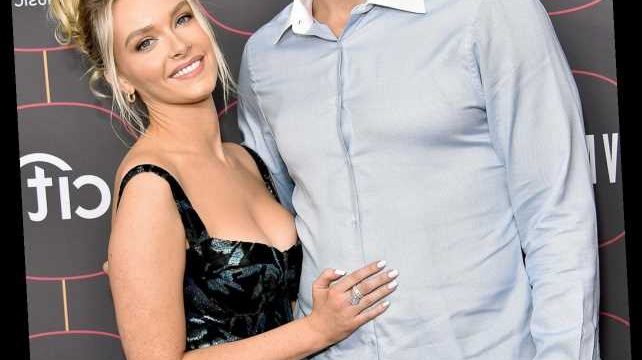 Camille Kostek is playing coy about the possibility of an upcoming engagement to her NFL player boyfriend Rob Gronkowski. The pair is understandably more focused on a Super Bowl ring than a diamond ring at the moment, but if and when that time does come, the model, 28, has some words of advice for the Tampa Bay Bucaneers tight end, 31.

When asked if she's "looking for a ring" during an upcoming episode of SiriusXM's This Is Happening with Mark Zito and Ryan Sampson, the Sports Illustrated Swim alum said, "I hate when I get asked this question, because isn't that a question for guys?" "I'm not the one who gets down on one knee, I'm supposed to be surprised," she added. To which Zito said his biggest fear in his own relationship was picking out an engagement ring that his fiancé hated.

"It's so interesting. It's been changing," Kostek said of the design she wants, before hinting, "I do have one, I'm like a very simple, simple girl."

"I also [am] one of those people, you know how like, people don't tell you what they're going to name their baby until their baby is born and they tell you? That's what it is for me. I'll wait until my ring is out. Then it can be like, this is what I always wanted."

The model also said she hopes Gronk consults her friends and family before buying a diamond: "I'm hoping that he's smart enough to ask my friends or my sisters," she quipped. "For me, right now we're focusing on the big [Super Bowl] ring." After their victory, Gronk called into The Late Late Show with James Corden and opened up about how he and his longtime teammate celebrated.

"We just gave each other a big hug and said, 'This is what it's all about. This is why we came down here. This is, you know, a dream,'" Gronk told Corden via video chat. "All the work we put in — we knew we had to put a lot of work in — and just coming to an organization that was ready for success. A lot of great players on this team, a lot of great coaches."

"We just gave each other a big hug and said, 'Man, we're doing it. We're doing it big. And it's for real. We're going to the Super Bowl. We came down to Tampa, man. Let's finish it off.' "

Gronkowski, 31, came out of retirement following several seasons with the New England Patriots to join Tampa Bay in April 2020, a month after Brady revealed he was also leaving the Massachusetts team to sign with the Buccaneers.