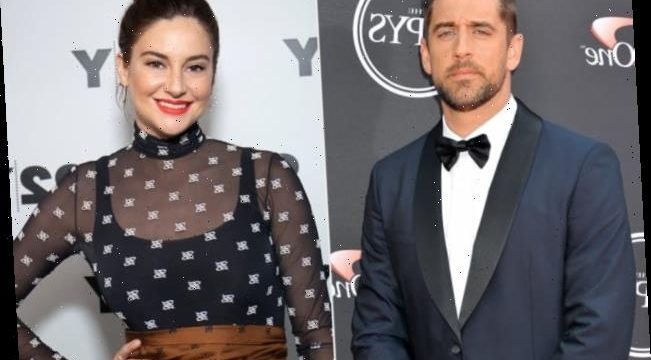 But hanging out with his movie star girlfriend and watching the game at home is probably a close second to being pursued by steroidal 300-pound defensive lineman all night, right?

Yes, as you may have heard, Rodgers is dating actress Shailene Woodley.

Woodley of course, is famous her roles in Big Little Lies and The Fault In Our Stars, as well as for brushing her teeth with clay and engaging in other granola girl habits that probably wouldn’t appeal to your typical NFL player, who prefers a more” traditional” approach to life.

(By which we mean, he considers Tater-Tot casserole a food group, and he believes Jesus personally roots for his team every Sunday.)

But Rodgers is a different breed of NFL legend.

He’s estranged from his family; he controversially stated that he believes God is not a football fan; and he has a reputation for being more introspective and cerebral than his teammates and opponents.

In other words, Rodgers might be a perfect fit for someone like Woodley, who also marches to the beat of her own drummer.

So how long have Aaron and Shailene been dating?

Well, we don’t know exactly, but it seems they were together for the entirety of the 2020 football season.

And given the extent to which Rodgers dominated the NFC with his MVP-caliber performance, Packers fans are no doubt hoping that Shairon (Aalene?) will remain an item for at least another year.

Rodgers was still dating Danica Patrick at the start of the pandemic.

The NASCAR driver sang her man’s praises back in April and revealed that he made quarantining easy.

“If you like a partner who is extremely attractive, super-intelligent, very thoughtful, patient (lord knows I can be stubborn), loves to travel, is open-minded, is into growing in this life, and can ball. Ya, it’s pretty amazing,” Patrick said at the time.

Around that same time, Woodley revealed that she was officially single, having recently ended her two-year relationship with rugby player Ben Volavola.

“We’re societally conditioned to assume that one person can be our end-all, be-all. This is a concept I’ve been thinking about often right now, because I’m very much single, and I’ve chosen to be single for a while,” Shailene told the New York Times in April of last year.

Shailene has yet to speak publicly about her relationship with Rodgers, but last month she penned an advice column for Leo magazine in which she shared her views on intimacy.

“‘Bad sex,’ in my opinion, is simply two people who haven’t quite found the language that speaks to their unique lives together yet. Or, two people who don’t know how to be deeply vulnerable with one another,” she wrote.

“And although you occasionally and very rarely do meet someone whom you spontaneously sexually combust with — most of the time, sex is a lesson in true intimacy.”

Despite her earlier comments on the topic, it seems like Woodley isn’t necessarily opposed to monogamy, which may be why Instagram and Twitter users are ‘shipping this couple so hard.

But while marriage rumors might be flying fast and furious, with how secretive these two are, they’ll probably be renewing their vows on their second honeymoon before they go public with the big news.