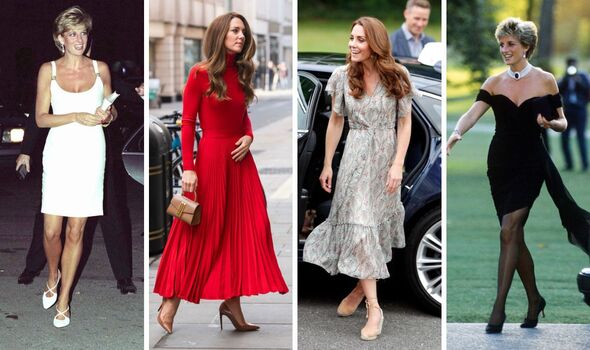 The late Princess Diana was a true royal style icon, as is Kate, Princess of Wales. Personal stylist and image coach Melissa Lund spoke exclusively to Express.co.uk about whether the late Peoples’ Princess would mirror Kate’s fashion sense.

Melissa started off by explaining that Diana had a style overhaul when she entered the royal spotlight.

She told Express.co.uk: “When Diana first met Charles the press nicknamed her Shy Di. She shared a flat with three friends and worked in a nursery school.

“Her rather Sloaney wardrobe seemed to consist of novelty sweaters, pie-crust collared blouses, long, flowing skirts and flat pumps, all of which were appropriate for her job at the time but were hardly stylish.

“However, once she became engaged to Charles her style journey started – from shy Sloane to style icon!”

Melissa believes that Diana “really enjoyed fashion – whether she was wearing a Versace sheath dress, full length Bruce Oldfield gown or shorts and a big sweatshirt for the gym”.

She was not a huge follower of trends, according to the expert, but developed a “signature style which worked for her”.

This included simple lines, clothes worn close to the body – aside from the iconic sweatshirts – bold colours and embellished evening gowns.

“She knew that these clothes photographed well – essential if you’re one of the most visible women on the planet. After all, who wants an unflattering shot to be shown around the world?”

If Diana was alive today, the Peoples’ Princess would be 61, and according to the expert, her style would be much the same – “classic”.

“I’m a fan of tweaking things when we’re older but, if we’re happy with our personal style, it’s not necessary to suddenly change everything just because we’ve reached a certain age. What we tweak depends on how the body changes and how we feel about it.

“Perhaps she’d have decided to wear fewer sleeveless dresses and maybe the skirts might have been a little longer?”

Kate Middleton has a lot in common with the late Diana, with both women under the royal microscope and never far away from a gaggle of fashion photographers.

But were she alive, would Diana dress as Kate does now? Melissa doesn’t think so.

She explained: “Diana’s style seems much sexier and more glamorous than Kate’s to me and she really seemed to love fashion and to love the attention it brought her.

“Her necklines are often high. This look is slightly prim and I don’t think Diana would have gone for that.

“I think it’s worth remembering that Diana was a mould breaker – the first royal woman to wear trousers for an evening event, wearing a tiara as a headband, making sure that her outfits had something which paid homage to the host country, for example. Where she led, others now follow.

“Kate’s style is elegant but not necessarily sexy. Aside from the recent Christmas card, where she’s wearing skinny jeans, many recent photos show that her preferred skirt length now seems to be ultra-long – with a hemline sitting just above the ankle for day.

However, Kate and Diana do share an eye for fashion, and have both worn some of the most famous designer brands out there.

Melissa said: “Kate has been on a style journey of her own, starting out wearing mainly High Street (which some people thought was great but I didn’t) and now wearing a mix of designer and High Street.

“Personally, I was pleased when she began to introduce more tailored, (often designer) pieces into her wardrobe because they give her the gravitas that she needs for her role.”