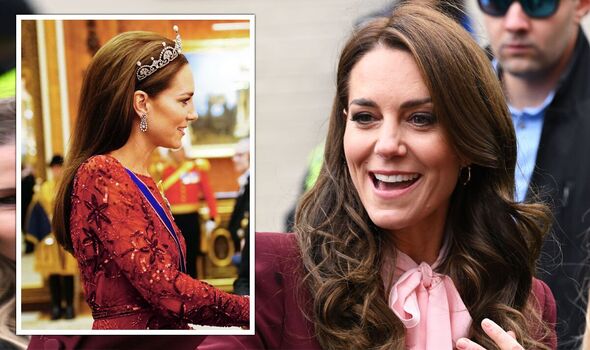 Kate Middleton, the Princess of Wales and Duchess of Cambridge wore a historic tiara last week. She attended a Diplomatic Corps reception at Buckingham Palace on the 6th of December.

To the delight of her fans the royal, who joined her husband Prince William, wore a dazzling tiara, the Lotus Flower Tiara. Royal fashion expert Miranda Holder commented on the “modern” way to wear a tiara.

The style aficionado explained the details to her 86K TikTok followers on her account @themirandaholder. She said: “There is nothing quite like (a tiara) for screaming ‘princess’, but did you know the way to wear them has evolved over the years?

“Tiaras are designed to sit at the front of the head so they’re on the same plane as the facial features. This means they could be easily admired and reflected flattering light back onto the wearer.

“In the 1920s the bandeau style was popular, as we see on the Queen Mother. Princess Diana was inspired by this and brought back the fashion with an emerald choker.

“The more modern way to wear a tiara is further back at a 45-degree angle. An updo is pretty standard, but Kate Middleton gave as a whole new look this week by wearing hers over a slightly 60s inspired, but gorgeous, sleek blow dry.”

Royal fans were quick to praise Kate’s new look, wearing the tiara with a full head of loose, long hair. One wrote: “I loved the long hair down with the tiara.” Another responded: “Mary of Denmark wears hers like it’s done all the time as well.”

Another remarked: “Aside from moving back on the head, they’re also now tilted down. Early pics of Queen Elizabeth and Princess Margaret show them more horizontal.”

“It used to be that the base should sit the same distance from the centre of the eyes as the space from the eyes to the chin,” one tiara fan wrote.

Miranda shared a little more detail on the particular tiara Kate wore. She claimed: “It’s gorgeous, but it didn’t start as a tiara. It was actually given to the Queen Mother as a wedding gift by her husband, the future King George. It’s customary for the royals to have pieces of jewellery refashioned into something else. It’s a bit like a royal form of upcycling.

Princess Margaret wore the piece often before her death, and Miranda said: “There was much speculation as to what had happened to the piece until we saw Kate looking beautiful wearing it in 2013. Kate wore it again in 2015, and of course, it was her crowning glory this past week.” The tiara is sometimes also known as the Papyrus tiara, which is another word for lotus.

Kate has worn this tiara only once, on her wedding day. It is a diamond and platinum piece, created by Cartier in 1936. It was given to Queen Elizabeth on her 18th birthday.

This was the first tiara Kate wore after her wedding to Prince William, in 2013 to a reception at Buckingham Palace. It has been worn by the Queen Mother and Princess Margaret.

Since Kate has worn it again in 2015 to a state banquet in honor of the president of China, Xi Jinping. The 2022 diplomatic reception last week was its first outing since.

Kate’s most worn tiara, so perhaps her favourite, Kate has worn this tiara nine times. She first wore it to a Buckingham Palace reception in 2015. She last wore the tiara last month at King Charles’s first state banquet, her first as the Princess of Wales. This tiara was a favourite of Princess Diana and was often worn by her. It is thought to be very heavy to wear.