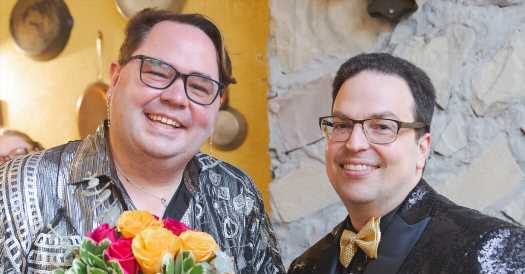 It’s usually rare that anyone upstages Stephen S. Miller, or Mama Rose as he’s known in some corners of the New York theater world. Outgoing and charismatic, he tends to be center of attention wherever he goes, even when he’s not wielding a microphone as a cabaret performer. By contrast, Brian Geldin, is more of an introvert. “I have always been more of a tight-lipped, dry sense of humor kind of guy,” he said.

This dynamic has served the couple well, both romantically and professionally. “We were compatible to work together and to love each other,” said Mr. Miller, who is also a stage manager for Off Broadway shows. “That’s something that not everybody can do, and we continue to do it to this very day.”

Within months of meeting on Match.com in 2019, they decided to parlay their combined strengths into creative projects, with Mr. Geldin, an entertainment publicist, lending his skills to Mr. Miller’s productions.

Their ability to work together successfully derives from their mutual admiration and the shared recognition that they work in slightly different spheres. “It’s two different worlds coming together as one,” Mr. Miller, a graduate of Grand Canyon University, said. “I understand what he goes through as a publicist and he respects what I have to do with makeup and costuming and performances.”

When live shows were suspended in New York because of the pandemic, they expanded the scope of their collaboration, creating two online series together, “The Mama Rose Show,” which wrapped in October, and an expanded version, “Tawkin’ with the Roses,” which debuted in February. (Mr. Miller gained the nickname “Mama Rose” because of his maternal presence as a stage manager.) In keeping with the couple’s natural division of labor, Mr. Geldin, 44, tends to work behind the scenes, booking guests and directing the episodes, while Mr. Miller, 37, hosts with Bonnie Rose, a veteran TV and film actress. 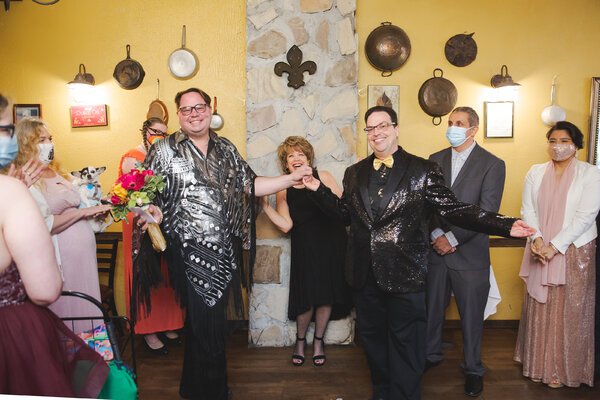 But when it came time to get engaged, it was Mr. Geldin who stepped into the spotlight. Before Mr. Miller could retool his prepandemic plan to pop the question in front of more than 100 friends and family members at Characters Bar and Grill, the site of the couple’s first date, he set his own in motion. In September, after the couple moved from the Hell’s Kitchen neighborhood of Manhattan to Forest Hills, Queens, he proposed during a walk through the neighborhood with their dog, Cooper.

Uncharacteristically, Mr. Miller was nearly speechless. “He almost collapsed and started crying, immediately said yes, and then I put the ring on his finger,” said Mr. Geldin, who received an M.B.A. in media management from Metropolitan College of New York. “It was a big shock,” Mr. Miller added. “I had no idea.”

The slight role reversal, Mr. Geldin said, was in keeping with the effect their relationship has had on him. “Stephen really brought me out of my shell and made me feel more comfortable.” Mr. Miller credits Mr. Geldin with a similar type of influence: “My life has vastly changed since meeting Brian. He’s brought out the real me.”

In a nod to the second anniversary of their first meeting, the couple signed their marriage license on May 4 over Zoom. A few days later, on May 8, they held a ceremony and a reception for 28 guests at Tuscan Hills in Forest Hills, their favorite restaurant in New York. Mr. Miller’s “Tawkin’ with the Roses” co-host, Ms. Rose, who was ordained by the Universal Life Church for the occasion, officiated.