The Handmaid’s Tale just gave us one of its most gutting episodes yet… but there was a tiny moment of triumph amid the tragedy, too.

If you have been watching The Handmaid’s Tale all this time and you still believed there was a chance that June (Elisabeth Moss) and Hannah (Jordana Blake) would be reunited, then we love your optimism, but simultaneously pity your naivety.

Or, to paraphrase The Little Mermaid’s Ursula, you poor unfortunate soul.

That being said, though, we still couldn’t help but get a little excited as the always-useless Mark Tuello (Sam Jaeger) briefed June and Luke (OT Fagbenle) on the ins and outs of his big rescue mission.

The plan? To fly three aircraftinto Gilead, drop some paratroopers into Hannah’s Wife School and whisk her away to safety.

“They’ll kill anyone who gets in their way,” says Tuello, somewhat ominously – because, yes, we all need to admit that firing bullets in a school filled with indoctrinated children will always be a Very Bad Idea.

June isn’t convinced, understandably, so Tuello introduces her to the commander leading the mission. She tells Elijah Vance (Brendan Morgan) that she fears for the safety of the little girls; he, in turn, reassures her that he understands how she feels. He has a daughter of his own, you see.

“My plan is to bring your daughter home, and go home to mine,” he says.

If we know our TV tropes, and we’re pretty sure that we do, then we may as well start measuring this guy up for a coffin right now, right? RIP Elijah, we barely knew ye.

Just as predicted, the mission is a bust. Thankfully, all of the girls are safe (although they are, y’know, still stuck in Gilead, so we use the word ‘safe’ incredibly loosely), but the same cannot be said for those brave pilots and paratroopers.

That’s right: Gilead got wind of the mission and shot down all three planes as soon as they crossed the border. No survivors. We guess that lovely commander won’t be going home to his little girl after all.

June is devastated and calls Commander Lawrence (Bradley Whitford) up on yet another burner phone.

June points out, fairly, that slaughtering soldiers isn’t the best way to avoid bloodshed. Lawrence counters by insisting that “the Americans did what they always did [and] they put Hannah, they put all of those girls in real danger”. In fact, he wants June to go on TV and publicly slam the botched rescue mission as “a foolish act of aggression” – before moving to bloody New Bethlehem, obviously.

“I cannot make Gilead look like the victim here. Joseph, it is an evil fucking country. I can’t do that,” June fires back.

We never thought we would be worried about Serena, and yet here we are.

June still hates the idea of becoming one of New Bethlehem’s first residents, even if Lawrence is promising her that it’ll mean she can live alongside her daughter and her erstwhile lover, Nick (Max Minghella). It’s what his late wife, Eleanor, would have wanted, he adds.

“Eleanor hated you,” spits June. “She couldn’t stand the sight of you. She was so broken and so ashamed of the man that she loved that she’d rather be dead. I watched her die. I did, I watched her die, and I did nothing, nothing.”

Her words have the desired effect on Lawrence. Indeed, his voice trembles with emotion as he says that “Eleanor would still want me to help you with Hannah, help you come back.”

June doesn’t want to go back to Gilead, no matter how Lawrence is dressing it up. She just wants Hannah back, and safe, and free to live her life in a country that doesn’t force her to a) become a child bride and b) pump children out in a bid to solve the world’s ongoing fertility crisis.

“Then go fuck yourself!” snarls June, in the most June moment of all time ever.

Handmaid’s Tale season 5 episode 5 recap: Serena Joy just offered up the darkest fairytale of them all

The call might have been a disaster for June, but it proves a win for Tuello: she’s finally back on his team. And, in a bid to make the most of her renewed allegiance to the USA, he asks that June speak to the aforementioned Nick.

“Put your power to use,” suggests Tuello, noting that it would be very good for business if Nick would agree to be their ‘inside man’ in Gilead.

Of all June and Nick’s many, many, many goodbye scenes, this is by far the most intense. Primarily because Nick is 100% on board with Lawrence’s New Bethlehem plans and genuinely think Gilead is changing for the better.

“There’s progress,” he says, after not-so-casually mentioning that his wife has a baby on the way. “Under Lawrence, we’re making it better.”

Still, though, June looks at Nick with nothing but adoration in her eyes. Still, though, she wishes aloud that the world were different and they could be together. Still, though, they meander their way through the beats of this oh-so-familiar conversation with trembling lips and breathless unspoken words of love.

Could it be that June and Nick have parted for good? At long last?

Well, for the first time in the Channel 4 series so far, June almost (almost) admits aloud that Nick isn’t the great man she once believed him to be.

“Children look to their fathers, you know,” she calls after him.

We love to see it, quite frankly.

“I guess we’re playing with the big boys now”

Over in Gilead, it seems the evil theocracy has been busy networking. Indeed, as Commander MacKenzie (Jason Butler Harner) points out – and he’s the adoptive father of Hannah/Agnes, for anyone who’s lost track – they have even secured a few new alliances.

“The ambassadors from China, Russia, and North Korea have all congratulated us for sticking it to the Americans,” he says happily.

“Yeah, what’s the old saying?” says Lawrence, who is busy celebrating his engagement to a reluctant Naomi Putnam (Ever Carradine). “Uh, any club that would have me as a member?”

Handmaid’s Tale season 5 episode 2 recap: why Serena Joy’s smile was so much more than a smile

That’s right, everyone: it was Lawrence who leaked the plans for the rescue mission – and who betrayed June in order to impress a few international pals. Pals which, we hasten to add, he doesn’t seem all that enamoured to be associated with.

Hmm. Lawrence is well and truly a ‘shades of grey’ character, so we can only hope that what’s left of his tortured soul is stirred into action when MacKenzie makes a few loaded hints about June being a “problem” that needs fixing.

Cue a Gilead-approved mass shooting at the memorial for the soldiers who were killed in the failed raid, with June leaping to save the late Elijah Vance’s daughter from the bullets raining down on them.

“I knew I wanted to end the episode with that image of a woman protecting a child in a world of very dangerous firearms and nationalism,” Whitford, who directed the episode, tells The Hollywood Reporter.

“There was a part of me that wanted to show the obscenity and the desecration of America that the normalisation of gunfire has brought about.”

We could spend hours talking about Serena (Yvonne Strahovski) and her unerring ability to play the game. All we really need to know, though, is this: she manipulates her way to an event she’s basically been banned from, and uses it as an opportunity to… well, to execute the most poorly thought-out escape plan of all time.

It is, essentially, this: she grabs baby Noah, she walks through an unlocked door onto the street, she hails down a car, any old car, and hops into it. 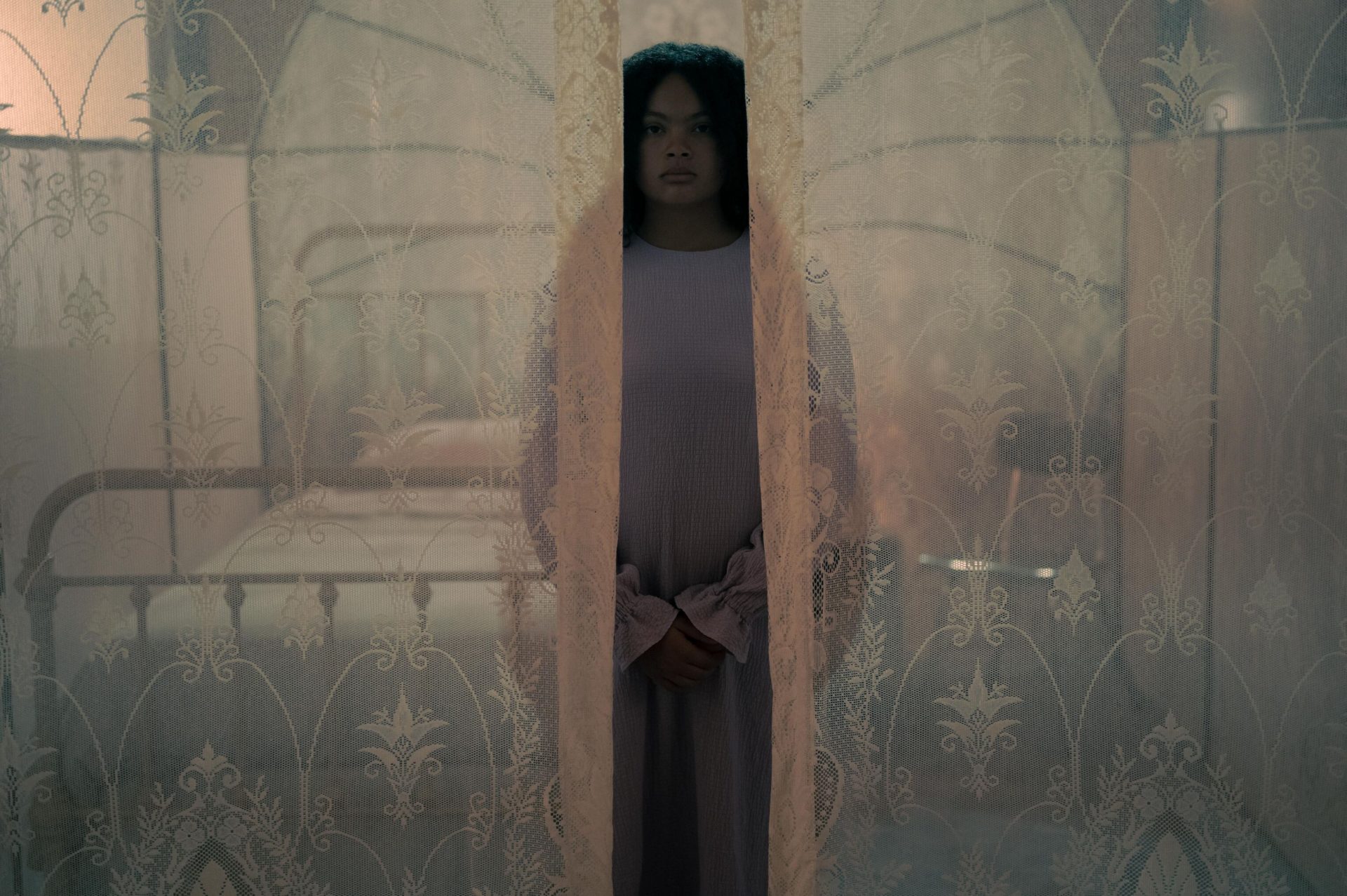 We never should have doubted you, Hannah.

Still, praise be and all that.

“Hannah knows who she is”

All in all, it’s a pretty bleak episode – but, thankfully, the writers have done something of a Rihanna and offered us up a dash of hope in a hopeless place. Because, for all Hannah has been held up as a true “child of Gilead” (shudder), it seems that this poor indoctrinated child isn’t so indoctrinated after all.

The best scene in this whole episode, and easily the most emotional (it genuinely caused a lump to form in this writer’s throat), was when Hannah whipped out a contraband pencil to write her name. Her own name, we mean – the one given to her by her parents, and not the one that Gilead has foisted upon her.

Her handwriting is stilted, unsteady, child-like – which makes a lot of sense when you consider that women are not allowed to read or write in Gilead. Indeed, the last time Hannah held a pencil under a teacher or parent’s guidance and tutelage was when she was a tiny five-year-old child. Still, though, she’s incredibly proud of her handiwork: the little triumphant smile on her face is absolutely galvanising.

“Hannah knows who she is when she writes her name,” says Whitford of that scene. “She hasn’t forgotten who she is. And that she has the sort of strength of will and spirit that June has.”

Hannah is still in there, everyone, and she’s a chip off the old block! Indeed, when you consider that it was a simple string of handwritten words (“Nolite te bastardes carborundorum”) that set June on her own journey to becoming the figurehead for the Mayday Resistance, one can’t help but hope that Hannah is similarly poised to do great things. To strike her own blow against Gilead. And to reclaim her voice and her power via the secret medium of the written word.

Roll on the final episode already…

The final episode of The Handmaid’s Tale airs on Channel 4 this Sunday 25 December at 9pm.