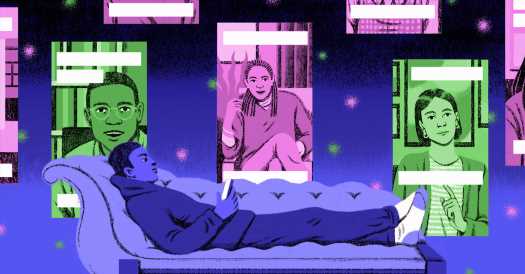 “Now this looks like a job for me,” licensed doctoral therapist Courtney Tracy mimes along to an Eminem track through crimson lipstick, responding to the question she’s posed, in black and white text, to her 1.4 million TikTok followers: “Do you have: Anxiety, Addiction, Childhood trauma, Mood swings, Borderline, Depression.” The clip has been viewed nearly 400,000 times in the three weeks since she posted it on her account @the.truth.doctor, a fairly standard amount of traffic for her pop-culture-saturated musings on topics ranging from trauma anxiety to signs of emotional abuse.

Welcome to therapy TikTok, where a steady stream of mental health professionals are trying to meet an anxious generation of young people where they are on social media. Gone are the soft-voiced analysts perched beside tissue boxes and a couch. These shrinks hit a milly rock while listing signs of unhealthy boundaries, demonstrate an anxiety relief technique to a trending Saweetie rap and wiggle their hips while explaining symptoms of dissociation. They dance their way through posts, propelled by the mysterious curatorial algorithm that guides the video app’s 100 million monthly active U.S. users. Limited to 60 seconds, these videos strain to offer context or elaborate, instead offering easy digestible answers to big questions: “What is intergenerational trauma?” “What are healthy ways to express rage?”

Mental health content has flourished on the app during a year when “everyone’s been high-functioning depressed,” said Micheline Maalouf, a licensed therapist in Orlando who has 1 million followers under the username @mashmushe. And while therapists have gained popularity on Instagram and YouTube in the past, TikTok offers a more immediate sense of intimacy. “People are posting in their pajamas,” she said. “It’s a different connection.”

Shani Tran, a licensed clinical counselor in Minneapolis, created her account @theshaniproject in January 2020 to post videos of herself dancing. She had a small following at first — 18 likes for a post of her shimmying in her kitchen, 800 views for sliding around the floor in a blazer to a Chris Brown song. Then she started posting about therapy. Tran was visiting her in-laws in Wisconsin, helping her 3- and 6-year-old daughters get dressed, when her phone wouldn’t stop pinging. A video she’d made about what it’s like to have a Black therapist had gone viral. “Can you be my therapist?” commenters asked. “Do you do virtual sessions?" “The notifications just kept coming,” Tran said. “I remember feeling a little overwhelmed.”

While an influx of followers can be confusing for therapists who are just looking to let off a little steam online, some view it as an opportunity to expand their client base. Marquis Norton, a licensed professional counselor in Hampton Roads, Va., posts under the TikTok account @drnortontherapy. (His bio reads: “CEO of therapy.”) He started his account in February, after a friend who’s a psychiatric nurse practitioner had also begun posting on TikTok. By summer, Norton had 100,000 followers. “That’s when I said I’m a content creator now,” he said. “I’m an influencer.” He has since hired a team of two interns to help manage his social media accounts, which he thinks of as marketing for his private practice. Like other therapists interviewed for this piece, demand has spiked for his services since he started going viral. He only just started taking new patients again, after working with other counselors to address his full outpatient practice and long wait list.

The line between content creator and licensed professional blurs often in TikTok’s frenetic ecosystem. For therapists in particular, often pegged as stoic, notepad-clutching intellectuals, showing off social aspects of their personalities can feel like rebellion. Therapists are trained “primarily to be a blank slate,” Dr. Tracy said. “We’re told not to talk about ourselves, to act like we don’t have a past.” That distinction, she said, can be a barrier to healing. Dr. Tracy posts openly about her experiences with mental illness and trauma; she said she has heard from more than 150 teenagers with symptoms like hers that they didn’t think they could become therapists themselves until they saw her videos.

Drawing a distinction between educating young people about mental health and offering therapeutic advice can be difficult. A group of about 40 TikTok therapists have joined a Facebook group to discuss the challenges and offer each other advice in safe spaces. They exchange countless text messages and hold monthly Zoom meetings where they discuss the ethical dilemmas that come with creating content — how to talk about suicide or respond to public comments — and trends they’ve seen in their own practices.

“What’s concerning, I think for everybody, is oversimplification,” said Lisa Henderson, a licensed professional counselor and past southern region chairwoman at the American Counseling Association. She worries that on TikTok, where videos are necessarily short, mental health treatments can be presented as quick, easy fixes, instead of “a long slog of hard work.” “It can be misleading,” she said, “more so than intentionally harmful.”

Therapists need to be careful to urge patients to not self-diagnose, Dr. Tracy said. The tips she offers online are educational, she stressed, not diagnostic. “We want them to absorb the information and then decide if they need to talk to a professional, versus them thinking it’s actual therapeutic advice,” she said.

Some popular creators establish strict boundaries for people seeking out their practice. Lindsay Fleming, a licensed professional counselor with over 393,000 followers, asks potential clients who say they know her from TikTok to see a different clinician at the private practice she runs in Park Ridge, Illinois. Her bio on TikTok says “Not therapy” under her qualifications as a licensed therapist. “I never want a client to come in and be like, well she has so many followers, obviously I’m wrong if her tools aren’t working,” she said.

To avoid legal and ethical concerns, therapists on TikTok often do not accept direct messages, and some don’t respond to comments on their videos — even when they receive a barrage of requests. Dr. Tracy gets tagged in videos of teenagers recording their parents yelling at them and TikToks in which people share their traumas. She receives between 25 to 100 messages each day from people asking for her help. “The magnitude of suffering that I become aware of every day is very overwhelming,” she said. “It reminds me of that part in ‘Bruce Almighty’ where all the prayers download into his mind.”

For therapists who suddenly find themselves with a massive online following, the pressure can feel constraining. In late January 2020, a few weeks after Maalouf, the Orlando-based therapist, put her first video on TikTok, she posted a clip of herself sitting on the couch in her office, legs crossed. “I’m here as an adult on TikTok,” the text above her reads, “… and also a therapist.” That night, her phone kept buzzing. She told her husband, before she went to bed, that maybe she’d get 1,000 new followers. When she woke up, she stared at her phone and did a double take. She had gained 80,000. “I thought, I can’t possibly handle this,” she said. Her audience kept growing, and Maalouf has become increasingly diligent about how she presents her content. “I can’t make mistakes,” she said. “I can’t half-ass it.”

Sometimes she channels those emotions when making videos, knowing that content on anxiety tends to resonate with her audience. Her recent tutorial on how to soothe a panic attack — holding ice in your hands, repeating “I’m safe.” — has over 75,000 views, and is flooded with comments. “I wish my therapist sounded as patient and calming as you do,” one reads. Another asks about anxiety attacks at night. Maalouf’s response: “Check out my previous video!”