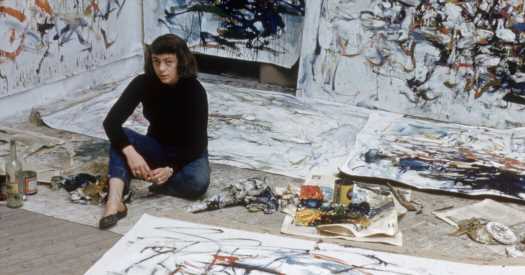 In 1948, Joan Mitchell was a 23-year-old artist living in a drafty apartment in Paris. She had arrived in France in the aftermath of World War II to a nation that was still reeling from rations and riots. A newly minted graduate of the Art Institute of Chicago, Mitchell had come to Paris to study the history of French painting and learn the techniques of the masters but found that her workaholism had frayed her nerves and rendered her too anxious to take part in the bustling social life of the city. Mitchell spent her nights awake, feverishly trying to improve her craft, huddling around her stove for warmth.

“I’m where I’ve always wanted to be — stove — bread & wine & canvases — I’m not depressed even — just arrived at a real knowledge of where I don’t belong which is everywhere,” she wrote in October of that year in a letter to her lover, Barney Rosset. Mitchell’s frustration during this early period in Paris, when she felt she had “painted terribly,” may have stemmed from her perceived failure to measure up to the artistic giants she so admired. As a teenager, she was raised on a steady regimen of music, dance, sports and art, with regular trips to the Art Institute to see 19th-century masterpieces by Cézanne, Monet and van Gogh.

At the San Francisco Museum of Modern Art, a major retrospective opening on Saturday tracks how Mitchell’s steely resolve to be written in history as one of the greatest painters produced a signature style that extended the contours of Abstract Expressionism. Spread across 10 galleries, with some 80 oil paintings and works on paper, the exhibition demonstrates how the bold physicality of Mitchell’s brush strokes allowed her to breathe new life into Abstract Expressionism, even as it had become outmoded, stateside, by Pop Art and Conceptualism.

The show, curated by Sarah Roberts, head of painting and sculpture at SFMOMA, and Katy Siegel, senior programming and research curator at the Baltimore Museum of Art (where the exhibition will be staged in March 2022 before traveling to the Fondation Louis Vuitton in Paris next fall), ingeniously reconsiders Mitchell’s legacy so that we see her developing a cosmopolitan, trans-Atlantic sensibility rooted in the tradition of 19th-century French landscape and history painting.

Mitchell’s sketches and a painting from her first sojourn in Paris in 1948 — a selection that includes a view of her tiny stove, rendered in the looping Cubist style popularized by Picasso — are among the works on view in the galleries. Though they appear derivative at first glance, these early works show how the careful consideration of form, color, line and space — the building blocks of all painting — would come to define the artist’s studied, deliberate approach to painting for the rest of her life.

Mitchell exhibited with her peers during the early ’50s in New York, and as she continued to study and develop her practice, her work gradually became distinctive. Rather than the all-over, canvas-filling brush strokes favored by other abstract painters, Mitchell’s works were looser, gathered away from the edges.

By the mid-1950s, she had cast off the early sense of being unmoored, and had begun traveling frequently between New York and Paris, rolling up her canvases and shuttling between short-term studios. She moved permanently to France in 1959, taking a studio at 10, rue Frémicourt, in Paris and later bought a property in Vétheuil, where Monet once lived. A particularly insightful grouping of paintings clarifies how the psychic state of Mitchell’s itinerancy manifested on canvas. In paintings like “Harbor December” and “Hemlock,” both from 1956, Mitchell twists long, broad strokes of paint around a central core of densely layered, multicolored marks to suggest a sense of torsion — of being wrenched, swept and spun around.

In two cleverly positioned paintings, viewers can get a sense of her penchant for evoking controlled chaos. With its clashing streaks of red, blue and orange radiating in two directions across its separate sections, the 1957 painting “To the Harbormaster,” titled after her friend Frank O’Hara’s poem (Its first lines: “I am always tying up/And then deciding to depart”) — speaks to how parts of oneself can constantly feel at odds with one another. “Mud Time” (1960), with its earth-toned impastos swirling around a central point, is astonishing for its ability to capture a sense of concentrated rage, offset by pale washes of gray and orange at the corners of the canvas.

Over the last decade, monographs like Patricia Albers’s “Lady Painter” (2011) and Mary Gabriel’s barn burner, “Ninth Street Women” (2018), have attested that Mitchell’s unruly aesthetics were matched by a raucous, brittle personality; her drinking habits and numerous affairs have long been the stuff of lore. Such revelations complicate our understanding of an artist who refused to fit neatly into any prescribed category, least of all the patronizing label “woman painter.”

The retrospective and its accompanying catalog continue in this tradition by shading in the contours of Mitchell’s artistic journey with a close look at her peripatetic affair with the French artist Jean-Paul Riopelle in the late 1950s and 1960s, sailing around the Mediterranean to Corsica, Italy and Greece for months at a time. As Roberts notes in her catalog essay, this roving lifestyle slowed Mitchell’s productivity, resulting in fewer opportunities to produce work in the dogged manner to which she was accustomed.

Her solution was to return to memories of landscapes, sublimating emotions and sensations into cascades of color and wash. Much of the existing scholarship on Mitchell, including in the catalog for this current show, addresses how her brush strokes are intimately connected to poetry, a form that allowed for feeling to swell and surface. These interpretations are vivifying and thoughtful, and a selection of pastel on paper works from 1975, collaborations between Mitchell and the poet James Schuyler, testify to the deep impact that poetry had on her painting.

Yet language alone cannot measure the sheer pleasure of her late paintings. The shift is dramatic: enormous scales, clashing, vivid hues and wild variations in texture. From the early 1970s to her death in 1992, Mitchell phased through periods of rapturous freedom, crippling melancholy and a reluctant acceptance of her own mortality. In this, she emulated her hero van Gogh, taking up his prized subject of sunflowers, though with her own verve, culminating in a dense, 1990 diptych that is layered with clusters of thick, sinuous strokes overlayed with thin drips of paint.

In multipaneled works like “La Vie en Rose” (1979), Mitchell juxtaposes energetic — nearly violent — sections of black and blue brush strokes against a haze of lavender and pale pink, warping the viewer’s sense of the painting’s scale and directing the eye across the four panels. Similarly, the yellow overpainting in “La Ligne de la rupture” (1970-71) appears gilded when seen against the framing of its dark aqua rectangle, proof positive that Mitchell, with all her knowledge of what paint could do, reveled in her ability to dazzle her audience.

Until the very end, Mitchell did not sacrifice her commitment to her distinct artistic vision, nor compromise on the rigor of her experiments in scale and color theory. She had found her place; she was no longer adrift. She had managed to bestow upon her painting the power to be truly transportive, taking her audience to depths she alone had traversed.