Every month, streaming services add movies and TV shows to its library. Here are our picks for some of March’s most promising new titles. (Note: Streaming services occasionally change schedules without giving notice. For more recommendations on what to stream, sign up for our twice-weekly Watching newsletter here.) 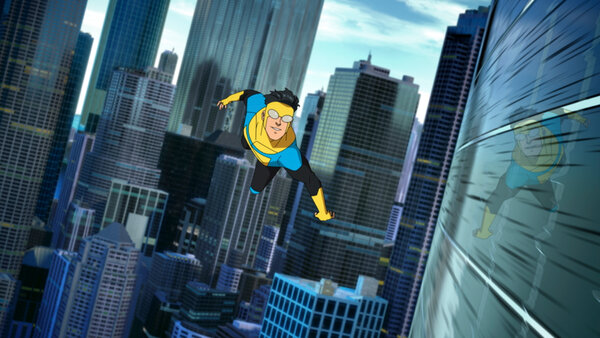 In 2003, the comic book writer Robert Kirkman co-created two series: the zombie thriller “The Walking Dead,” later adapted into a long-running live-action cable TV series, and the superhero saga “Invincible,” now arriving on Amazon as an adult-oriented cartoon. The actor Steven Yeun (a “Walking Dead” veteran) voices Mark Grayson, a teenager who discovers he has superpowers, just like his alien father, Omni-Man. Before Mark can properly train to be a hero, a succession of world-threatening crises forces him to learn on the job. As with Kirkman’s comic, the animated version of “Invincible” is ultraviolent and marked by shocking plot twists — including a doozy that pops up in the middle of the credits of the first episode. Though the story takes some dark turns, the overall vibe is bright and entertaining, with lots of nods to classic superhero characters.

‘The Falcon and the Winter Soldier’

The Disney+ hit “WandaVision” is coming to an end on March 5, but the Marvel TV Universe will be expanding two weeks later when this latest series arrives. In “The Falcon and the Winter Soldier,” Anthony Mackie and Sebastian Stan play the title characters: two guys who used to partner with the now-retired Captain America. They’re both now wrestling with what their old friend represented while trying to figure out their evolving responsibilities as heroes. The new show remains shrouded in some secrecy, but the Marvel Studios president Kevin Feige has said that unlike the more experimental “WandaVision,” this show has been designed to look and feel like a Marvel movie, filled with white-knuckle action sequences and globe-hopping adventure.

Originally released in the fall of 2017, the expensive superhero epic “Justice League” was supposed to do for the DC Comics movies what “The Avengers” did for the Marvel Cinematic Universe: make big money at the global box office while setting the stage for further blockbusters. But some behind-the-scenes troubles — including the director Zack Snyder’s having to step away for personal reasons, to be replaced by “The Avengers” director Joss Whedon — resulted in a film that was a financial disappointment, drawing mixed reviews from fans and critics. Now, after years of clamoring by DC devotees, Snyder has been given the money and time to finish his version of “Justice League,” which will run twice as long as Whedon’s, and will restore subplots and character arcs left out of the theatrical release.

Tina Turner had one of the greatest second acts in pop music history, rebounding from an abusive marriage and years in the commercial doldrums to become one of the biggest hitmakers of the 1980s — and a Rock & Roll Hall of Famer. The story of her tumultuous musical and romantic partnership with Ike Turner has been told onscreen before, in the hit 1993 biopic “What’s Love Got to Do With It.” The Daniel Lindsay and T.J. Martin documentary “Tina” gets more in-depth with both her personal life and her career, relying on insightful interviews and electrifying performance footage to illuminate the artist’s troubles and triumphs. The movie is a welcome attempt to define a rock legend as more than just a victim.

The action-comedy “Boss Level” is a lot like “Groundhog Day” in that both are about cocky guys who learn humility when forced to relive the same day. But the repetition in this new film has more in common with video games, where the heroes reset at the same point every time they get killed. Frank Grillo plays Roy, a smart-alecky bruiser who’s gotten good at surviving the gauntlet of assassins who try to murder him each time his day restarts — although he can’t quite figure out how to fight his way up to the main bad guy (played by Mel Gibson). Directed and co-written by the accomplished action filmmaker Joe Carnahan, “Boss Level” follows Roy as he learns how to notice all the small details and side characters in his world, to help him survive into tomorrow.

The first two seasons of the historical drama “Genius” covered the lives of Albert Einstein and Pablo Picasso, with all-star casts helping to tell stories that jumped around in their subject’s timelines, illustrating the moments that shaped their greatness. The third season takes a similar narrative approach, but has a higher degree of difficulty, given that it’s about Aretha Franklin, who sang some the best-loved R&B songs of all time. The producers had the good sense to cast the Emmy-, Tony- and Grammy-winning performer Cynthia Erivo, who has the musical chops and the screen presence to do Franklin justice. The actor-singer belts out the likes of “Respect” and “I Never Loved a Man the Way That I Loved You,” while also capturing a complicated artist’s stubborn unwillingness to let the public and the press get too close.

“Into the Dark: Blood Moon”

The filmmaking brothers Anthony and Joe Russo are best known for directing “Captain America” and “Avengers” movies, but they veer off in a very different direction with their new film, “Cherry.” Based on Nico Walker’s semi-autobiographical novel (adapted by the screenwriters Angela Russo-Otstot and Jessica Goldberg), “Cherry” stars Tom Holland as a directionless young Ohioan, who drifts from college to the military before eventually finding himself back home, struggling with a serious opioid addiction and mired in a life of crime. Ciara Bravo plays his wife, who follows him into the junkie abyss and encourages his career as a bank robber. The Russos employ a highly expressionistic style here, making battlefield trauma and druggie squalor look nightmarish and surreal. They’ve framed Walker’s story as a modern morality play, tracing the path that a lot of 21st-century Americans have followed into despair.