Cicely Tyson, who died on Thursday at age 96, never wanted to be confined to the roles that had been customarily reserved for Black women. She had no interest in perpetuating stereotypes. She was drawn to female characters distinguished by their dignity, strength, intelligence, compassion and bravery — even though that might have limited her available professional opportunities. “I could not do anything that would not enhance humanity, especially women,” she once said.

Her poise and determination still resonate in Tyson’s best work, much of which is available right now. Some, like her groundbreaking role in the early ’60s TV series “East Side/West Side” (which also starred George C. Scott) or the ’90s NBC legal drama “Sweet Justice” aren’t legally streaming. But these eight of her best titles are, in chronological order.

Pauline Kael praised Tyson’s performance in this period film, saying she created the “first great Black heroine onscreen.” At a time when blaxploitation films were all the rage, Tyson’s character, Rebecca, was notable for being realistic, rural and notably resilient. In Depression-era Louisiana, Rebecca has to save her family from starvation after her sharecropper husband (Paul Winfield) is imprisoned for stealing food. Tyson precisely calibrates her character’s determination and dignity, navigating a system that is stacked against her. It’s a portrait of a woman who endures, and the beauty of that endurance. The performance earned Tyson an Oscar nomination.

Stream it on Brown Sugar, The Film Detective and YouTube; rent it on Amazon and DirecTV.

‘The Autobiography of Miss Jane Pittman’ (1974)

In this highly praised made-for-TV movie, based on the novel by Ernest J. Gaines, Tyson amazed viewers with her metamorphosis into the fictional 110-year-old woman Jane Pittman. (Or approximately 110 — Jane wasn’t sure, but her lifetime spanned the Civil War and the Civil Rights movement.) Tyson studied the movements of older people, contorted her back, blurred her own vision with thick contact lenses and generally did full justice to the brilliant makeup effects by Stan Winston and Rick Baker. But it was Tyson’s performance that was most memorable, especially the quiet act of Rosa Parks-like bravery in which she nonchalantly drank from a whites-only water fountain. Tyson earned two Emmys for the performance (one was actress of the year), and became the first Black woman to win an Emmy as a lead actress.

Stream it on HBO Max, DirecTV and Mubi; rent it on Amazon. 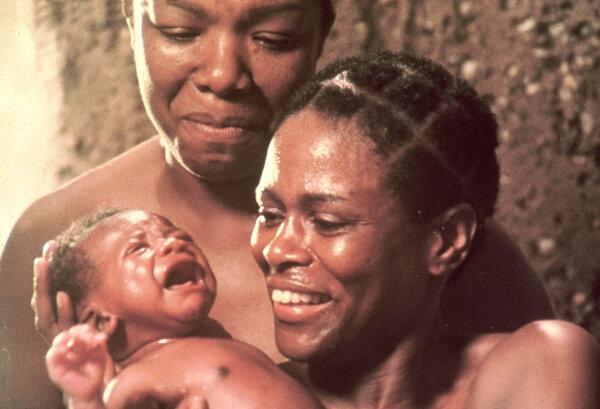 The groundbreaking show that helped launch a mini-series craze, “Roots,” based on the novel by Alex Haley, is one of the most-watched series in television history, with an estimated 100 million people tuning in for the finale alone. Tyson frequently said that no matter what other parts she took, people would always know her as Binta, her “Roots” character. As the mother of Kunta Kinte, Tyson had only a few scenes, but they were essential for laying the groundwork of the story, which helped make the ugliness of slavery real for a mass audience.

Stream it on DirecTV; buy it on Amazon, Fandango Now, Google Play, Vudu and YouTube.

Before anyone could accuse Tyson of prestige-TV humorlessness, she poked fun at her own image during her stint as the first Black woman to host “Saturday Night Live.” Because of the show’s lack of diversity at the time, this meant she shared a lot of sketches (and a monologue) with the cast’s only Black member of the time, Garrett Morris (who also did a Tyson impersonation). In their best bits, they jokingly bicker about racial issues — the Token Minority Window-Dressing Act, the Black Resentment Drama Workshop. Bonus: Tyson sings!

Stream it on Peacock and Hulu.

As Sipsey, Tyson turns out to be the secret weapon in a film that’s ostensibly about the relationships between other women — a story of love and friendship between Idgie (Mary Stuart Masterson) and Ruth (Mary-Louise Parker), as told by Ninny (Jessica Tandy) to Evelyn (Kathy Bates), who then becomes inspired to change her own life. Sipsey is the maternal figure for her own family as well as for a white one, and Tyson gives the character a quiet ferocity that may surprise you. It certainly surprises the local Klansmen.

In this popular adaptation of Kathryn Stockett’s 2009 novel, Tyson has to fight for attention in a cast heavy with celebrated (and Oscar-nominated) competition. She succeeds in the end with her unforgettable portrayal of Constantine, the beloved Black maid and nanny who raised the white girl Skeeter (Emma Stone), only to be tragically cast aside. Despite Tyson’s brief time onscreen, her character looms large throughout the film — and has broken your heart by the end.

After winning a Tony Award for playing Mother Carrie Watts in the Broadway revival of the classic play by Horton Foote, Tyson transported the character — her dream role, she said — to the small screen, where she took on the additional role of an executive producer. Her work in this made-for-TV feature is even more melancholy than it was onstage, especially during the final goodbyes. Thanks to playing dual roles, she was nominated once again for two Emmys for the same work.

Stream it on Lifetime (via Amazon) or DirecTV; buy it on Amazon iTunes and Vudu.

Although she didn’t share screen time with Viola Davis in “The Help,” she definitely did in this ABC legal drama, playing Ophelia Harkness, the outspoken mother of Davis’s character, Annalise Keating. The two women have a fraught relationship, so Tyson got into character before Davis could even welcome her on the set — by walking right past her without a glance or a word of recognition. Ouch. This chilly tactic was clearly effective; the role helped Tyson break the record for most Emmy nominations as a guest actress (five).

Stream it on Netflix; buy it on Amazon, Fandango Now, Google Play and Vudu.