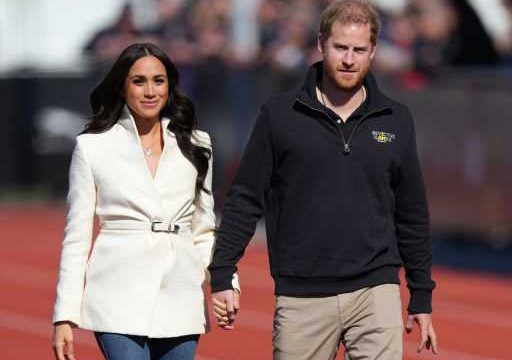 Prince Harry and Meghan Markle have been fairly busy since taking a step back as senior members of the royal family. The Duke and Duchess of Sussex are using their platform and Archewell foundation to engage with communities, filming a Netflix series, exploring their own personal ventures (hello, Meghan’s upcoming podcast!), and raising their two children, 3-year-old son Archie and 1-year-old daughter Lilibet. But after visiting this familiar A-list friend during a recent outing the couple took together, we can’t help but wonder whether or not they have a new project coming up, or another interview in the works.

According to photos published by the Daily Mail, Harry and Meghan were spotted driving over to Oprah Winfrey’s house recently. In the snapshots, Harry took the wheel of the couple’s Range Rover. Another person, whom the outlet identified as Meghan’s pal Janina Gavankar, rode in the passenger seat, while Meghan was seen in the backseat.

As soon as the photos were released, speculation began to swirl regarding the couple’s visit at Winfrey’s home. Naturally, thoughts go back to the pair’s March 2021 interview with Winfrey, but the Sussexes have been close with their Montecito neighbor for some time, so honestly there could be a number of reasons why the couple paid her a visit.

Let’s take a step back for a second to name just a few reasons why Harry and Meghan may have been heading to Winfrey’s: the couple was visiting a friend and neighbor. Or, perhaps, they’re looking for Winfrey’s advice on a new venture? Are the Sussexes collaborating with Winfrey on a project? Remember, the former daytime TV host worked with Harry on the Apple TV+ series The Me You Can’t See. And, sure, there might be the slightest chance of another interview. There are a number of potential reasons for Harry and Meghan’s recent visit to Winfrey’s home. But one thing’s for certain: this couple is just as busy as ever.

From headlines to word-of-mouth, we all think we know Prince Harry and Meghan Markle’s true story. But there’s one book that takes longtime royal fans even more in-depth, revealing stories about the couple we only thought we knew. Finding Freedom: Harry and Meghan details the couple’s romance, wedding, the birth of their first child, and their decision to take a step back from royal duties. Authors Omid Scobie and Carolyn Durand take us far beyond the picture-perfect moments to the tough decisions this couple had to make in order to preserve their relationship and happiness. With this book, longtime royal fans may learn more about Harry and Meghan’s new path outside of the royal family.