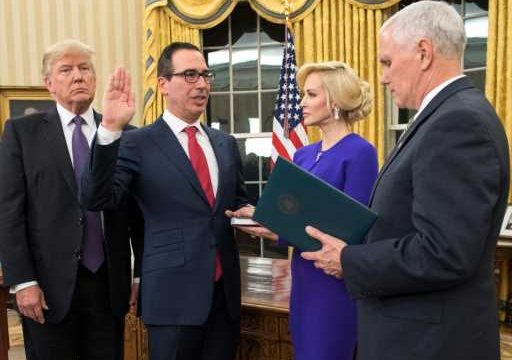 Louise Linton is finding that guilt by association has come into play big time in her Hollywood career, thanks to her husband Steven Mnuchin’s former position in the Trump administration. She feels that she was unfairly judged by the entertainment community just because Mnuchin was U.S. Treasury Secretary, but now, she’s relieved the last four years are over.

“Fortunately, he’s not in politics anymore, and I’m happy to have my husband home in Los Angeles [with me],” she told Fox News. “I think possibly it does… at times I think because of my association with that administration, people have this preconceived notion about me or I’ve been villainized.” The problem is that nobody asked about her personal politics, they just assumed she shared the same beliefs as her husband.

It’s not only unreasonable to think that, but it also falls along misogynistic lines of women not have any independent thinking. Women don’t always vote the same way as their husbands. If anyone had bothered to ask her, they might have been surprised by what she had to say. “I’m not involved in any politics, and I’m very liberal,” she told the conservative network.

That’s not to say that conservatives have welcomed her with open arms either. The Scottish actress often found herself at odds with trying to bridge the great divide between the two political parties, especially when it came to their vastly different policies on social issues. “Either I can express my beliefs and be at odds with my husband and his boss and get in trouble that way, or I can decline to comment and be in hot water with everyone else,” she admitted to Los Angeles magazine in 2019. “Sucks either way.”

But Linton hasn’t made it easy on herself over the years by often posting tone-deaf and absurd photos on her Instagram page, so that might be why her new movie, Me, You, Madness, which she wrote, starred, directed and produced, is the perfect camp vehicle for her. The actress told Fox News that she swears her character is “a parody, a caricature and a satire” of how she was portrayed in the media, and believes that in real life it, “couldn’t be further from who [she is] as an actual person.”

Before you go, click here to see presidential families over the years.