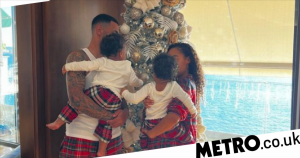 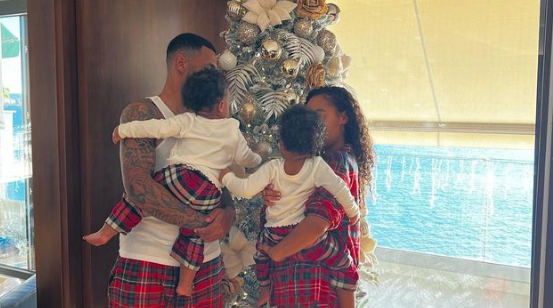 Leigh-Anne Pinnock has shared a peek into her Christmas with fiancé Andre Gray and their adorable twins, and safe to say it was extremely wholesome content.

The Little Mix star and her footballer partner, both 31, welcomed their babies into the world in August 2021 but have chosen to keep their genders and names private.

However, Leigh-Anne does very occasionally share photos of their tots and on Christmas Day she gave a glimpse into their celebrations as a family.

Wearing matching red tartan pyjama bottoms (which seems to very much be the theme this year), Leigh-Anne and Andre posed in front of a white flocked Christmas tree holding one twin each, with the youngsters leaning in to give each other a kiss.

The two children were also dressed in red tartan pyjama bottoms, and in another photo were shown the decorations on the tree by their doting parents, while the third photo saw them pose for the camera with their faces later obscured by emoji.

‘Merry Christmas from the Graynocks 🎄❤️,’ Leigh-Anne wrote in the caption, debuting a fun amalgamation of their surnames.

The popstar’s fans gushed over the pictures in the comments, as one posted: ‘Oh my heart melted 😩💗💗’, while another added: ‘The most beautiful family! Merry Christmas Earth Angel 💚’

Leigh-Anne then showed off their stunning festive fare in her Stories as she panned her camera across the table, groaning with food, which included chicken, slaw, blinis, prawn and lettuce tacos and mountains of vegetables.

A second video, in black and white, showed the twins quietly playing with their new toys in the aftermath of present unwrapping, while their mum then went outside to the balcony across the water to show the water as the family enjoyed a Christmas away.

Andre and Leigh-Anne celebrated their sixth anniversary in Jamaica in May, after getting engaged in May 2020 when the Queens Park Rangers footballer made a romantic proposal in their garden during lockdown.

However, the pandemic complicated their wedding plans.

Sources claimed they were set to tie the knot earlier this year, but it appears the couple haven’t walked down the aisle just yet.

Leigh-Anne is currently on official hiatus from Little Mix after an emotional final concert in London with her bandmates Perrie Edwards and Jade Thirwall in May.