King Charles III is reportedly making moves that his mother, Queen Elizabeth II, did not do during her reign — and it’s against his own brother, Prince Andrew. The Duke of York is reportedly no longer welcome at Buckingham Palace as most of his privileges as a royal family member are over.

Queen Elizabeth rendered a soft blow to her favorite son after he could no longer outrun his association with convicted sex offender Jeffrey Epstein. He was stripped of his patronages and his senior royal role, but she still allowed him to keep a small staff and officially use his Buckingham Palace office. Well, it looks like those days are over. The Sun is reporting that “any presence at the Palace is officially over” for Prince Andrew.

The insider added, “The King has made it clear. He isn’t a working royal. He’s on his own.” It looks like Andrew is finally learning that there are consequences to his actions because Charles is taking away the remaining perks of the job. He lost his role as the Colonel of the Grenadier Guards; Queen Consort Camilla is now in charge. He has to fund his own staff (with what job?) and hire his own communications team, and the days of taxpayer-funded security are done too. King Charles is apparently picking up the tab personally to make sure his brother is safe.

The one shining light left to his royal life is being able to stay at his home on Windsor estate — which the U.K. publication noted could be yanked from him in the future. While it doesn’t serve much justice for his alleged victim in the Epstein case, at least Charles is doing something his mother didn’t have the guts to do. 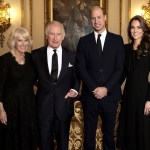