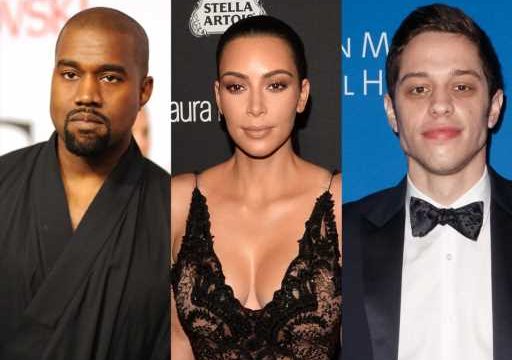 Kim Kardashian and Pete Davidson are probably breathing a sigh of relief right now because they are getting 24 hours of peace and quiet after weeks of verbal abuse from Kanye West. After the rapper threw out a racial slur at The Daily Show host Trevor Noah on Wednesday, West is finding himself silenced on Instagram.

Noah pointed out to his viewers on his Tuesday show that fans were seeing was an “escalating” situation between a divorcing couple. “There’s an element of a woman saying to her ex, ‘Hey, please leave me alone.’ It touches on something that is more sensitive and more serious than people would like to admit,” he noted. “I see a woman who wants to live her life without being harassed by an ex-boyfriend or an ex-husband or an ex-anything.” And he also made a great point about domestic violence, adding, “What we’re seeing here is one of the most powerful, one of the richest women in the world unable to get her ex to stop texting her, to stop chasing after her, to stop harassing her.” If Kardashian can’t get the intimidation to stop, can you imagine how difficult it is for the average woman?

West didn’t appreciate Noah’s personal take on his situation with Kardashian, so he continued his tirade on Instagram — but this time, aimed it at the talk show host. It was then that the Yeezy founder was reported “for violating the platform’s policies on hate speech, bullying and harassment,” a Meta spokesperson told the HuffPost. But one day off the social media platform isn’t much of a punishment, and West will likely be back to his old antics in no time.