Inge Ginsberg, who fled the Holocaust, helped American spies in Switzerland during World War II, wrote songs in Hollywood and, in a final assertion of her presence on earth, made a foray into heavy metal music as a nonagenarian, died on July 20 in a care home in Zurich. She was 99.

The cause was heart failure, said Pedro da Silva, a friend and bandmate.

In a picaresque life, Ms. Ginsberg lived in New York City, Switzerland, Israel and Ecuador. She wrote songs and poetry, worked as a journalist and refused to fade into the background as she aged, launching herself, improbably, into her heavy metal career.

She was the frontwoman for the band Inge and the Tritone Kings, which competed on television in “Switzerland’s Got Talent,” entered the Eurovision Song Contest and made music videos. Whatever the venue, Ms. Ginsberg would typically appear in long gowns and pearls and flash the two-fingered hand signal for “rock on” as she sang about the Holocaust, climate change, mental health and other issues.

In the 2017 music video for the band’s song “I’m Still Here,” Ms. Ginsberg stands in front of a screen showing filmed images of refugees. She sings — in a manner reminiscent of spoken-word poetry — about her grandmother and four young cousins, all of whom were killed in German camps. At the end, she slices the screen and walks through it, singing as she joins the other band members amid a roar of electric guitars, drums and a pounded piano.

“All my life, I fought for freedom and peace,” she sings. In the last chorus, Ms. Ginsberg, who was in her 90s at the time, screams, “I’m still here!”

The band grew out of a friendship between Ms. Ginsberg and Lucia Caruso; they had met in the audience of a concert in 2003 at the Manhattan School of Music. Ms. Caruso, a student there, was watching the performance of a doctoral composition by her boyfriend, Mr. da Silva. The couple married, went on to performing and teaching careers in classical music and stayed close to Ms. Ginsberg.

One day in 2014, Ms. Ginsberg read out loud to Mr. da Silva the words of a children’s song she was writing. “She wrote these lyrics about worms eating your flesh after you die,” Mr. da Silva said. That had the ring of heavy metal to him, and he suggested building a band around her.

The band began rehearsing and filming music videos later that year, the productions paid for by Ms. Ginsberg. She wrote the lyrics to their songs and performed them, with Mr. da Silva and Ms. Caruso and others accompanying her on various instruments, including the guitar, piano, drums, organ and oud.

A short documentary video in 2018 for The New York Times Opinion section by the filmmaker Leah Galant recounted Ms. Ginsberg’s story. It shows scenes of her performing on “Switzerland’s Got Talent” and auditioning to appear on the NBC show “America’s Got Talent.” Speaking on camera, she said she wanted to prove through her performing that elderly people could still contribute to society.

“In American and even European culture, the old people are excluded from life,” Ms. Ginsberg said in the Op-Doc. “You have to have the chance to be heard.”

A 96-year-old who fled the Holocaust finds a new way to be heard.

[theme music] [music] [heavy metal music playing] [singing in German] [heavy metal music playing] [singing in German] “Hello.” “Hi.” “Yes, I can see. I like how you look. Amazing. I met Inge almost 15 years ago in school.” “One summer, she started writing these lyrics about blood and death. And I told her, ‘This sounds like death metal lyrics.’ And she goes, ’Death ’metal, what is that?’ Inge wrote the lyrics, and we wrote the music for these songs.” “O.K., let’s do those two lines again.“ “Only two lines. Save your breath.” [laughing] “Do you know why I want to keep you doing this? Because this way, you keep living. Your spirit is up. And then it lifts your body up.“ “Yeah, so just those three measures.” [click beating] [music] “Shouting!” [shout] “Yes.” [shout] “Yes!” “That’s awesome.” “Again?” ”Now you can go, ‘Raaawwwr!’” [silly vocalizing] [MUSIC – DEAN MARTIN, “TRY AGAIN”] “(SINGING) And that’s why you must try, try again.” [drumming] “You just ruined that sheep’s whole day.” “Poor sheep.” “Poor sheep, yeah.” “Exactly.” “You can keep going.” “If she got the beginning, we can just do the — —” “We’re close. We’re very close.” “We need love. Just do — we need love. Does that work?” “Yes.” “We’re going to just do a different thing with the camera.” “Can you look at yourself in the small mirror?” “We’re both nervous because we’re performing in ‘America’s Got Talent.’” “Well, I’m not nervous at all because of that. I’m nervous because of Inge.” “Yeah. She says she doesn’t want to go now.” “Just go and talk to her.” “Take a deep breath, Inge.” “We’re all here now.” “You know what you need? Pampering.” “You need pampering.” “You — —” “You’re going to be so bored after two hours of quiet.” [music] “And I love the preparation more than anything. Isn’t this the best time?” “Yeah, O.K. That’s it.” “O.K. Good. You want me to turn the light off? Are we ready to go?” “Let’s go.” “Let’s go, that’s it!” “You see? That’s all you need to do: Just go.” “We keep doing this with Inge because we know this gives her energy. We know that this keeps her alive.” “Oh, yeah?” “Yeah.” “Oh.” “Wow.” “So Inge, I want you to really go crazy there. I want you full of energy. So the beginning, fairy tale-like. Da, da, da, and then duh, duh, duh!” [music] [music] [cheering] [MUSIC — “IF I WERE A RICH MAN”] (SINGING) “All day long, I’d biddy-biddy-bum If I were a wealthy man!” [applause] [metal music playing] 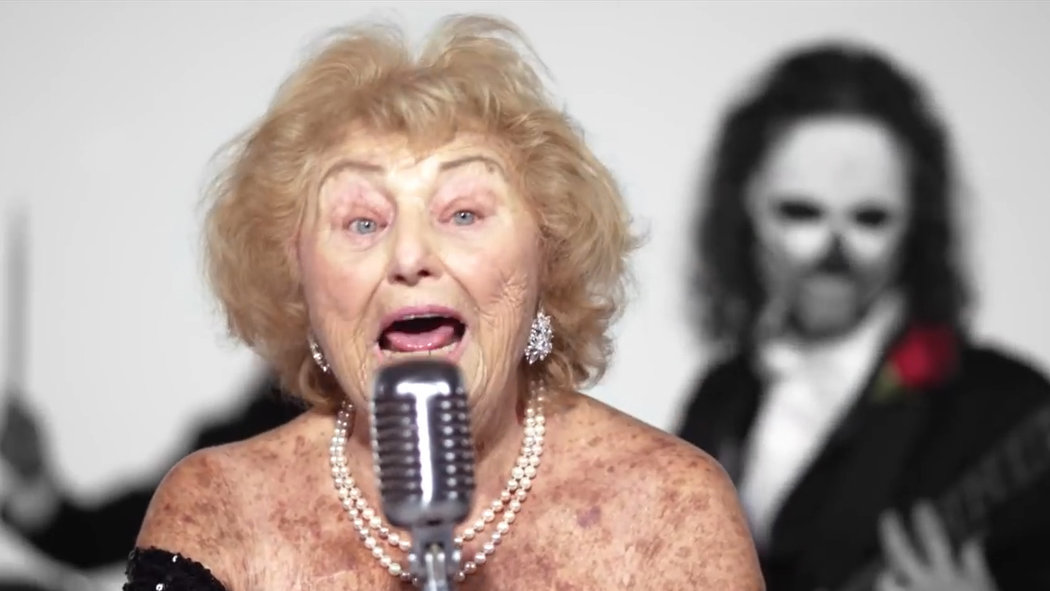 Ingeborg Neufeld was born in Vienna on Jan. 27, 1922, to Fritz and Hildegard (Zwicker) Neufeld. Her father ran a freight company, and her mother was a homemaker.

Ms. Ginsberg described herself as a “Jewish princess” in her youth; she and her brother, Hans, had been afforded every luxury. But that changed with the rise of the Nazi Party.

Ms. Ginsberg would tell Ms. Caruso and Mr. da Silva stories of the persecution of Jews in pre-World War II Vienna. In one instance, she said, she hid all night behind a grandfather clock in a building in town to evade Nazi paramilitary forces targeting Jews. Her mother assumed the worst, but Inge returned the next morning to a tearful reunion.

After the war had begun her father was arrested and sent to the Dachau concentration camp but was freed, Ms. Ginsberg said, after he bribed Nazi officials. Her mother, meanwhile, using money from the sale of her jewelry, fled to Switzerland in 1942 with Inge, Hans and Inge’s boyfriend, Otto Kollman, who would become Inge’s husband.

The family lived in refugee camps in Switzerland, and Ms. Ginsberg managed a villa in Lugano, which was used as a safe house for Italian resistance members; there, she said, she and Mr. Kollman would pass messages from the resistance to the American O.S.S., the precursor of the C.I.A.

After the war, she and Mr. Kollman made their way to Hollywood, where they worked as a songwriting duo. The couple divorced in 1956.

Ms. Ginsberg said in the Times documentary that she eventually found Hollywood “all fake” and returned to Europe the year of her divorce. She worked as a journalist in Zurich, wrote a German-language memoir of her time at the villa and published several books of poetry. She had invested successfully in the stock market, which kept her wealthy throughout her life and allowed her to pursue writing.

In 1960, she married Hans Kruger, who ran a luxury hotel in Tel Aviv, where the couple lived. They divorced in 1972. That same year, she married Kurt Ginsberg, and they mainly lived in Quito, Ecuador.

Ms. Ginsberg is survived by her daughter with Mr. Kollman, Marion Niemi, and a granddaughter.

After Mr. Ginsberg’s death, Ms. Ginsberg split her time among homes in New York, Tel Aviv and Zurich. By the spring of 2020, she was living in the Zurich care facility when she contracted the coronavirus. Pandemic restrictions often kept residents from seeing one another or from entertaining visitors, and the isolation took its toll.

“We have no doubt whatsoever that she died because of boredom, loneliness and depression,” Mr. da Silva said.

He and Ms. Caruso kept in touch with her over the phone, and the three began writing another song for the band called “Never Again,” also drawing on Ms. Ginsberg’s experience during the Holocaust.

“Each one of my songs has a message,” Ms. Ginsberg said in the documentary. “Don’t destroy what you can’t replace.” She added a second message: “You can’t avoid death, so laugh about it.”