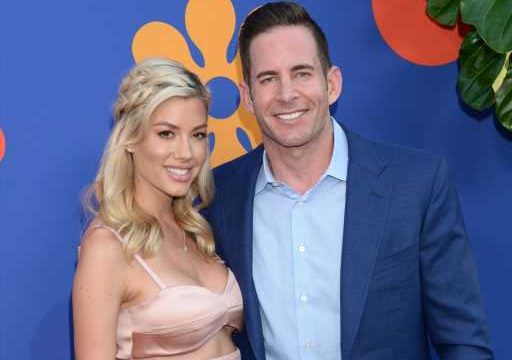 Marriage can change a lot in a couple’s dynamic. After exchanging vows, something really clicks for two people as they plan their future together, and it seems like Heather Rae Young and Tarek El Moussa are undergoing that change at this very moment. After their picturesque wedding on October 23, the couple is already making plans for their blended family, and welcoming their own little one might be in the cards.

Following their fairytale wedding, the two reality TV stars chatted with People about what plans they have for their family, as Heather becomes a bonus mom to Tarek’s two kids — Taylor, 11, and Brayden, 6, both of whom he shares with ex-wife Christina Haack. In the past, it seemed like the door was closed on Heather and Tarek ever having a child of their own. But now, that door may have just cracked open. “We don’t know what’s going to happen, but we’re open to it,” the newly-minted Mrs. El Moussa explained.

“And it would be a big decision,” she went on. “It’s not just something that I want to say, ‘Let’s just see if it happens.’” Indeed, the couple does have a lot to consider when it comes to this major life decision. But once they settle into their new life together, it really seems possible that they could take that major step — but only if they both want to.

More than anything, Heather wants “to create something with him, that’s ours, together…I feel I would regret it if I didn’t,” the Selling Sunset realtor said. “So we’re open to it.” In the past, it seemed like the two were set on not having any children together. Heather has even recalled that, while the two were dating, not having kids was a talking point in their relationship.

Now, even Tarek seems to be warming up to the idea of expanding his family with Heather. “I love being a dad,” the Flip or Flop star told People. “I would never regret having more kids. I love my babies so much.” Like we said, marriage can change everything, and it seems Tarek and Heather’s shared priorities might be shifting.

Before you go, click here to see celebrity moms who are close with their stepkids.