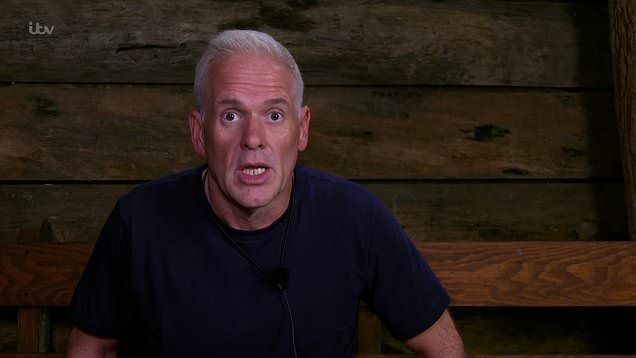 I’m A Celebrity star Chris Moyles has revealed remarks made by Matt Hancock made him ‘walk out’ of the jungle.

The Radio X DJ became the sixth celeb to be booted out of the ITV juggernaut series on Thursday, just days before the epic finale.

During his exit interview with hosts Ant and Dec, Chris raged that Matt Hancock remained a contender to be the King of the Jungle, in disbelief the disgraced MP was ‘more popular than me.’

Hancock’s decision to sign up for the reality programme has sparked widespread backlash from the likes of Covid-19 charities, politicians and stars, including Jodie Comer.

The controversial politician had guided the country through the Covid-19 pandemic as health secretary but was forced to resign when he was caught breaking his own social distancing guidelines in a tryst with married aide Gina Coladangelo.

Chris reflected more on Hancock’s stint Down Under, who had previously explained he had hoped for ‘forgiveness’ from the public during the course of I’m A Celeb.

Speaking about the MP on The Chris Moyles Show on Radio X on Friday, he explained: ‘I was venting quite a bit at first when he came in, because, well, I’ll just say it: He should be at work because he’s an MP.

‘He’s paid to look after people and their interests and hopefully make their lives better, and I don’t know how he does that by going on the jungle show.

‘There was a moment when we got into a conversation about him and it got quite tense – which I accidentally started by going, “So when’s your book out?” and he went “Next month”. I didn’t know he had a book.’

Chris said he ‘got annoyed’ with Hancock because it seemed unfair he was being offered a redemption arc, comparing it to fellow campmate Seann Walsh.

Seann was previously a contestant on Strictly Come Dancing and was pictured snogging dancer Katya Jones while she was married to fellow Strictly pro Neil Jones and he was dating Rebecca Humphries.

Chris continued: ‘And the reason I got annoyed with him was because Seann, who did something in his personal life that got thrown in all of the newspapers and didn’t impact my life whatsoever has had a really, really hard time career-wise, mental-health-wise.’

‘He was very open about it and has come on the show to basically say, “I’m really not a bad guy, can I start again?”. Which is really honest and takes a lot of balls to do that.

‘And Matt Hancock kind of dived around a few questions I thought, and then said, “I guess all I’m asking for is forgiveness”.’

Chris added: ‘At which point I had to walk out of camp and just get away because I personally found that quite fake. And that really wound me up.

‘And then I had to separate Matt Hancock from Matt who was in camp, who was doing his best at trials to try and win us food.’

Hancock, controversial, has made it to the final four and is competing against royal Mike Tindall, Hollyoaks actor Owen Warner and Lioness Jill Scott to be crowned I’m A Celeb champion.

Even he was shocked to have made it this far, confessing in the Bush Telegraph after Chris was eliminated: ‘We’re so near the end and I’m delighted to be still here’.

‘I never thought I’d make it to the final five and here I am, so I’m very grateful.’

I’m A Celebrity continues tonight at 9.15pm on ITV.