Brad Pitt is making a major real estate move in the new year as he’s reportedly selling the $40 million Los Angeles estate that he once lived in with Angelina Jolie and their six kids. The property was originally bought by him in 1994, long before he became involved with Jolie, and he was able to scoop up neighboring lots to make it an A-list compound.

The 1.9-acre estate has some pretty impressive amenities that should entice a buyer who has a large family or who loves entertaining at home. Pitt added a swimming pool, a tennis court, and even a skating rink over the years for his children to enjoy. Now, that his family dynamic has changed — several of the Jolie-Pitt squad is estranged from their father — he’s “looking for something smaller” in the city, according to People.

The Oscar winner originally purchased the property for $1.7 million, so he stands to make a sizable profit once the home is sold. However, he and Jolie have multiple lawsuits going against each other as they struggle to wrap up child custody for their 14-year-old twins, Vivienne and Knox, in addition to a massive legal battle over their French winery, Château Miraval.

Pitt has been making the rounds on the award-show circuit since his film Babylon has been in contention. He’s been walking the red carpet solo despite being linked to Paul Wesley’s estranged wife, Ines de Ramon. There are lots of changes ahead in 2023 for the 59-year-old actor as he tries to start a new chapter in his post-Jolie life.

Before you go, click here to see which celebrities own the most homes around the world. 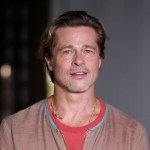