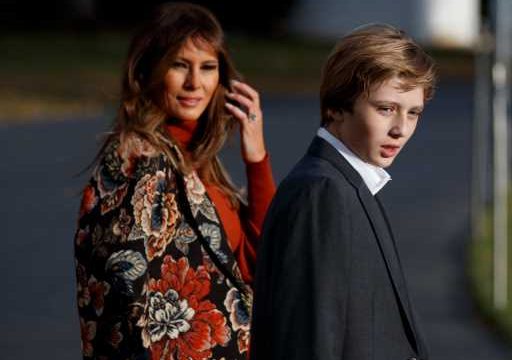 Melania Trump is back in New York City, and her potential semi-permanent relocation now has her teenage son, Barron Trump, joining her for an outing in the Big Apple. The mother-son pair were spotted leaving their Manhattan home (Trump Tower, of course) this past week on July 7, and it looks the youngest Trump, who just turned 15 years old in March, has really grown. The rarely seen son of the former First Lady and twice-impeached former President Donald Trump totally towered over his 5-foot-11-inch mom.

According to the New York Post, Barron is 6-foot-7 (see photos here) and just halfway through his teenage years. Barron is hardly ever seen out and about, and even during his years in the White House, Barron was usually just seen with his parents for events or those number of times they departed Air Force One. Now that he’s back in NYC with his mom, however, perhaps these outings might become more regular. After leaving the White House in January, Melania was hardly spotted out in public, opting to maintain a low-profile at the Trump’s Mar-a-Lago estate.

In fact, Melania’s presence was so scarce, some read into her absence at her husband’s 75th birthday. But a source shared with People that there was nothing amiss from Melania’s lack of presence at her husband’s milestone birthday. “Melania is happiest when she is with her own family members, including her son,” the Trump insider shared at the time.

“She is not dumb, she just knows how to handle her life to make it as fulfilling for her as possible.” Well, it seems that Melania’s post-White House life has taken her back to the Big Apple. Of course, she’ll likely be splitting her time between the city and Mar-a-Lago. But as more and more family members come under legal scrutiny, perhaps NYC will offer a safe haven and stability for the former model and her teenage son.

Before you go, click here to see quotes that prove Melania Trump is a lot like her husband.