Homes were uninhabitable and groups had to adjust services. Called to act, one man said: “It’s always satisfying when you’re helping people, especially when it’s the people you live around. 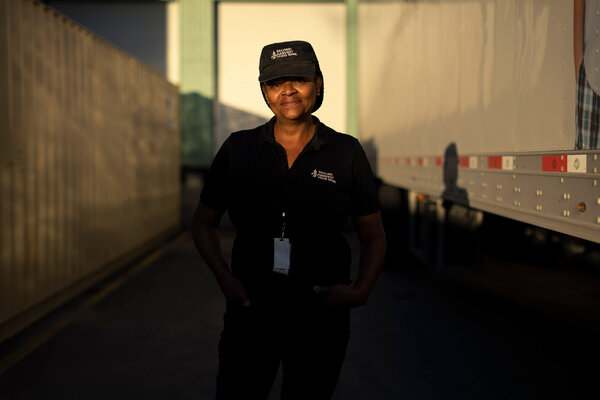 The power went out in Mamie Jackson’s home on the Sunday afternoon when Hurricane Ida moved into Louisiana. The rain came next, and when Ms. Jackson realized her bedroom ceiling was leaking, she placed a bucket under the leak. The next thing she knew, her ceiling was falling in.

She and her husband moved to the only room of their home in Kenner, La., about 15 miles from New Orleans, that wasn’t leaking. They listened as several other ceilings fell in, a tree came down and the patio went “bloop.”

For Ms. Jackson, 57, feeling helpless is unusual. As a retired supply sergeant in the U.S. Army, Ms. Jackson eventually took her skills to Second Harvest, a food pantry in New Orleans operated by Feeding America, which is supported by The New York Times Neediest Cases Fund. As director of operations, Ms. Jackson developed a no-nonsense reputation, and her work ethic earned her the nickname “General Jackson” among her staff members.

But in all her years of serving and helping in times of destruction, Ms. Jackson had never experienced damage to her personal property as she did during Hurricane Ida. “This was a new experience,” she said. “Watching your house fall apart around you was amazing to me.”

Ms. Jackson went to stay with family before moving into a hotel, where she and her husband are still living. But two days after her home was nearly destroyed, it was time to get back to work.

She and her team at Second Harvest had been through a handful of storms in the past year, in addition to dealing with the coronavirus pandemic and its economic fallout. So when the hurricane crashed through the region on Sept. 5, “We knew what we had to gear up for,” she said.

The storm damaged floors and skylights in Second Harvest’s warehouse, and a downed electrical wire limited one of their truck routes. But Ms. Jackson and her crew reported back to work on Tuesday, Sept. 7, and got started on what they do best: loading trucks with fresh water, ice and food.

Ms. Jackson said it was a relief to get up and go to work.

“We are here to help people make ends meet,” she said. “We’re here to do a job, it’s not the most glamorous thing in the world, but it has the most pride attached to it.”

There was still the matter of her home. When she returned for the first time after the storm subsided, Ms. Jackson fell to her knees in tears.

Three weeks after the storm hit, an insurance adjuster said most of the walls of her house would have to come down to the studs. Since then, she has been returning to the house where she raised her three children, trying to salvage items like her treasured record collection.

Ms. Jackson was displaced from her home for three months after Hurricane Katrina in 2005. So when residents attend food distribution events, she knows what’s it like to be in that line.

“When you’re coming through a line, is it embarrassing? Yeah. But do you need it? Yeah,” she said. “We don’t look down on anybody because you never know what their situation might be.”

The Neediest Cases Fund is also supporting eight other organizations in its 2021-22 campaign, which recently kicked off. Kevin Roose, a technology columnist for The Times, spurred a large contribution when a nonfungible token, or NFT, of a column he wrote was auctioned in March. The proceeds were pledged by The New York Times Company to The Fund.

“I thought we might raise a few hundred dollars for a good cause,” Mr. Roose said.

He was blown away by the result: The NFT sold for 350 Ether, the cryptocurrency used for the auction, or about half a million dollars. Over the next several months, cryptocurrency prices rose, and the value of the winning bid jumped to $1.1 million. That donation was recently put toward The Fund’s 2021-22 campaign.

“It was only possible because readers and fans of The Times wanted to support the paper and its mission,” he said.

Another of the organizations supported by The Fund is World Central Kitchen. For Edmond Jackson, 55, it was a lifeline after the hurricane. And he turned his misfortune after Ida into an opportunity to help others. He had just started working as a dishwasher and prep cook at a restaurant in New Orleans when the storm hit.

The restaurant shut down. Mr. Jackson was out of work — and out of power. He let a chef at the restaurant know that his food supply was running a little low. That’s when he was connected to World Central Kitchen, which deploys pop-up food kitchens in disaster areas around the world and is supported by The Fund. To date, they have served 460,000 meals in the area.

Mr. Jackson (who is not related to Ms. Jackson) was hired to work out of the New Orleans Culinary Institute on an assembly line that was putting together hot meals. He helped secure trays of food into heated transport units, and he did it with speed.

“In a way, it seemed normal,” he said. “It’s always satisfying when you’re helping people, especially when it’s the people you live around.”

Mr. Jackson, who moved to New Orleans to help with recovery efforts after Katrina, worked with World Central Kitchen for a month straight. He had a few days off, and is now back at his regular job.

Many basements filled with water, including the lower-level offices of the Association of Community Employment Programs for the Homeless, a work force development program based in Long Island City, Queens. The group, which is supported by the Community Service Society, a beneficiary of The Fund, uses the office space for adult education, computer training, mock interviewing and counseling.

The storm brought nearly two feet of water into the office. The association trains about 220 clients each year, and supports upward of 600, but without the home base of the office, much of the programming has been on hold.

“Our space was designed to be theirs,” said James Martin, the executive director. “Our folks get real individualized attention, and it’s effective.”

He worries that the lack of in-person time means some clients are falling through the cracks. But the group is doubling down on outreach to clients in the meantime, and hopes to have the space reopened by the end of this month.

“We’re fighters here,” Mr. Martin said. “That’s what we preach and what we do.”

Donations to The Neediest Cases Fund may be made online or with a check.