Plus: bungalows near a national park, a new sushi restaurant in Manhattan and more recommendations from T Magazine.

Welcome to the T List, a newsletter from the editors of T Magazine. Each week, we share things we’re eating, wearing, listening to or coveting now. Sign up here to find us in your inbox every Wednesday. And you can always reach us at [email protected]. 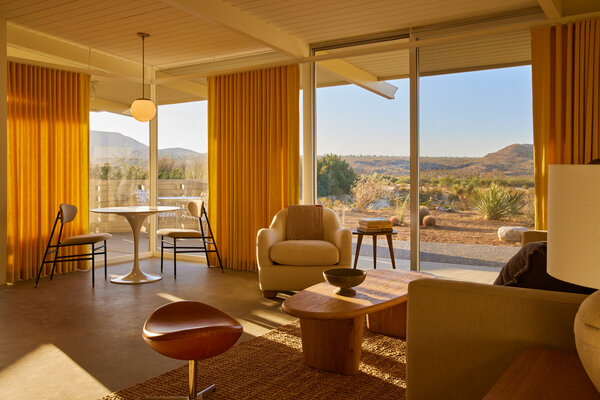 On the edge of Joshua Tree National Park, where a forest of wild paloverde trees meets towering granite boulders, the Joshua Tree Retreat Center welcomes the first boutique property in Yucca Valley, a town known for its eclectic offering of renovated motels and private-home rentals. The 14 suites, now known as the Bungalows, were designed and constructed in 1960 by the architect Harold Zook as accommodations for the site’s on-campus teachers. Located in the northwest corner of the center’s more than 130 acres of desert, the bungalows still feature their original wood exteriors, while the interiors seem sun-bleached, with earthy jute and sea grass rugs, woven cane-backed chairs and intricate millwork to evoke a bare-sand feel. The spaces were redeveloped by the hospitality company Homestead Modern and restored in collaboration with the consulting designer Brad Dunning; as a nod to the work of the Swiss architect Albert Frey, the rooms are accented with yellow textiles the color of Encelia flowers, a hue popularized by Frey in his modernist structures in nearby Palm Springs. Floor-to-ceiling glass panels and sleek concrete floors blend with expansive outdoor patios and the views beyond. During a stay, guests can cook on the site’s communal grills or dine at the retreat center’s vegetarian cafe. Rooms from $250, retreat.homesteadmodern.com.

On the occasion of his 60th birthday this spring, the Belgian architect and designer Vincent Van Duysen was given an opportunity to look back. He dove into his archives both professional — over the three decades of his career, he’s been known for a desaturated, soft-on-the-senses aesthetic originally born as a rejection of the brash excess of the ’80s — and personal, via an analysis of his own living rooms, for an ongoing collaboration that begins this month with the fashion giant Zara’s housewares line. “I wanted to revisit my ‘wardrobe’ of furniture pieces,” he says of the 19 products, which include furniture, lamps, rugs and smaller decorative items. Quality materials, such as solid French oak, sanded stone from Galicia, Spain (where Zara’s headquarters are located), and pure cottons and linens were paramount, but as a self-proclaimed “democrat in heart and soul,” Van Duysen was drawn to the company’s ethos of affordable fashion for everyone; the pieces were designed to work with the scale and style of a city apartment or country house. “My furniture pieces can find a place in any kind of living room for any kind of person anywhere in the world,” he says. From $299, beginning June 30, zarahome.com.

The First Fragrance From Vintner’s Daughter

Growing up, April Gargiulo’s home was notably void of artificial fragrances, lest they interfere with the grasp of a wine’s aroma. (Her family now owns Gargiulo Vineyards in the Napa Valley.) “I have a relationship with scent but in the natural world,” she says. When she launched her sustainable skin-care line Vintner’s Daughter in 2013, though, a face oil gained a devoted following as much for its lush botanical smell as for its formula, crafted from 22 nutritive plants. The brand’s first limited-edition perfume oil, Understory, arrives this week and refers to the medley of flora along the forest floor, with notes of conifer evergreens, bay and moss blended with hints of jasmine, violet leaf and soft petals. The bouquet is designed to be unobtrusive. “Understory is not about an announcement to others,” Gargiulo says, “but rather a celebratory moment with oneself and nature.” The slim rollerball applicator comes with a wearable pouch made from vegan leather, so transportation to a magical woodland is only ever a quick dab away. $245, vintnersdaughter.com.

A Surrealist Sushi Restaurant in Chinatown

When Nick Poe began drawing up plans for Time, his new 25-seat restaurant in Manhattan’s Chinatown, he wanted the design to be unexpected. “There’s almost a formula for how a sushi restaurant is supposed to look: maple wood, wabi-sabi,” says the architectural designer and co-owner, known for creating airy spaces such as Sky Ting yoga studios and Lee’s Private Dining Room. Instead, he looked to the Parisian travels of Japanese surrealist artists like Iwata Nakayama and Kansuke Yamamoto in the 1920s; the result presents trademarks of French bistros and Tokyo sushi bars alike, from chairs reupholstered with vintage Persian carpets to gleaming custom mirrors bearing the kanji for “sashimi” and “alcoholic beverages.” The chef Yukio Fukaya, most recently at Nare in Midtown, crafts seasonal omakase for eight diners seated at an oak bar crowned with gleaming stainless steel. Next to him, two additional chefs turn out spicy sesame cucumber salad and chutoro with soy-cured egg yolks and fragrant nori rice for the packed downtown crowd. As the sun sets, brown paper lamps inverted on the original tin ceiling illuminate the hand-painted fresco of an architectural model that wraps around the walls, drawing the eye toward the street, where matcha martinis and tuna hand rolls are dispensed from a side window overlooking the Manhattan Bridge. 105 Canal Street, timeoncanal.com.

A Haven of Eye-Popping Home Items

The scheme for one of Hollie Bowden’s tastefully muted projects often begins with a single theatrical piece. A recently completed apartment in West London’s Notting Hill was entirely inspired, for example, by a pale pink 18th-century mottled marble fireplace sourced in Belgium. “I’ve called myself a minimal maximalist because I love bare space with an object that’s so special,” says the 38-year-old interior designer, who’s decorated homes for the singer FKA Twigs and a store for the British luxury brand Tanner Krolle. But after 20 years spent amassing the sorts of memorable one-offs that might be just the thing for clients, friends or herself (she is renovating her family’s home in Finsbury Park in north London), she was running out of space; hence the opening of the Gallery, an appointment-only shop next door to her studio in Shoreditch. On offer are design classics, such as a 1970s steel-and-leather lounger by Vittorio Introini for Saporiti and an appealingly weathered De Sede DS600 wiggly sofa, alongside more obscure treasures, including a ceramic walrus acquired in Mexico City. Then there’s the solid “Ebb” bedside table — Bowden’s first venture into housewares design and a collaboration with her partner, Byron Pritchard, a furniture designer who handcrafts the tables in walnut in his studio on the nearby Broadway Market. What you won’t find? Anything Instagram famous. As Bowden puts it, “I’ve always wanted it to be a subtle offering — a piece that says, ‘If you know, you know.’” Email [email protected] to make a one-hour appointment.