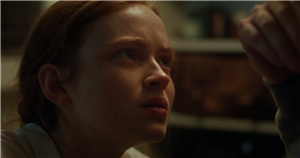 If you’ve already watched Taylor Swift’s All Too Well: The Short Film several times, you probably have plenty of theories about its meaning and, more specifically, what it reveals about Taylor’s past relationship with Jake Gyllenhaal. And while the film is chock-full of Easter eggs to figure out, there are also a few scenes that feature dialogue that viewers can’t hear behind the soundtrack. If every time you’ve watched the short film you’ve been studying Sadie Sink’s lips wondering what she’s yelling at Dylan O’Brien, you’re in luck, because a lip-reader has officially weighed in on the conversation.

A speech therapist, who goes by the name @tippacanoe on TikTok, shared a pair of videos breaking down what it looks like the characters are saying underneath the music during key scenes. The two scenes in particular she lip reads are the breakup scene, which begins at the 2:54-minute mark, and the phone call scene, at the 7:42-minute mark. Both scenes feel pivotal in the film, and both feature dialogue that viewers can’t hear, as the 10-minute version of “All Too Well” plays over the scenes.

In her video about the breakup scene, she focuses on Sadie’s character, aka the fictionalized version of Taylor herself. “That’s it?” Sadie’s dialogue reportedly begins. “Just f***ing talk to me, f***ing look at me!” The scene continues in the same way, with her character begging Dylan’s to “look at me, f***ing look at me!” before the scene cuts away. It’s pretty clear that the scene is all about the breakdown in communication in the relationship, with Sadie’s character pushing back against a partner who refuses to talk or even make honest eye contact with her. The dialogue isn’t eloquent or slick; it’s simple, raw, and totally ordinary, making the scene feel even more realistic.

The same TikTok user also made a video about the phone scene, which she acknowledges is much harder to get an accurate reading of. Dylan seems to start by shouting, “My god, this is my f***ing career!” He then adds something along the lines of “I’m really f***ing done —” before cutting off the call and getting back in the car.

The line about his “career” raises even more questions about the real relationship that inspired the song and short film. Did he complain that all the press and paparazzi attention was hurting his acting career? Did he blame his relationship with Taylor for his career problems at the time? It’s worth noting that at the time that the real Taylor and Jake were involved, his career was in a bit of a dry spell: action-adventure movies like Prince of Persia and Source Code were flopping, and Love and Other Drugs earned him a Golden Globe nomination, but the movie itself was tepidly received.

Even though viewers can’t actually hear any of this dialogue, it definitely adds another layer of meaning to the already emotional song and video. Give the short film another viewing, and see for yourself if the lip-read dialogue looks accurate to you. Whatever Sadie and Dylan are saying in the film, one thing is certain: we can always count on Taylor to create layered, emotional, thoughtful art. If you need us, we’ll be a crumpled up piece of paper lying here.