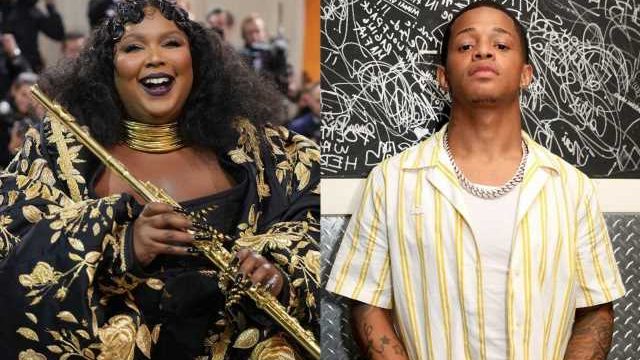 The ‘Valentine’ singer publicly shoots his shot with the Grammy Award-winning raptress in a video message posted on his Instagram Story after he’s seen getting twerked on by a woman with similar features.

AceShowbiz –YK Osiris is letting the world know his admiration of Lizzo. The 23-year-old singer has unashamedly shot his shot with the “Truth Hurts” hitmaker, who has been dating stand-up comedian Myke Wright.

On Saturday, July 30, YK sent a flirty message to Lizzo via his Instagram Story. In a video, the R&B artist posted a video which saw him lying in bed. He cleared his throat and said, “What’s up Lizzo, I just wanted to say hey.”

The Jacksonville native praised Lizzo’s physique, calling her “beautiful black queen.” He then claimed that he didn’t want to overdo his approach before urging the Grammy Award-winning artist, “Check your DM though, alright.” He tagged @lizzobeeating with a rose and heart emoji on the video.

In the clip, music blasted from the speakers as a plus-sized woman dressed in hot pink feathers made her way toward the “Valentine” hitmaker’s direction. The Def Jam artist then stood behind her as she winded her hips on his lower region.

A few days prior, he posted a video of a woman twerking on him in a similar fashion. Clearly enjoying it, he captioned the clip, “Idk what I was doing last night, but I know I was having fun asf [laughing emojis].”

While Lizzo is currently dating Myke, she may be open to a fling with YK. In an interview on “The Breakfast Club” on July 15, she admitted that she doesn’t believe in a traditional relationship a.k.a. monogamy.

“I think people who do poly and all that stuff, there’s still rules. … I don’t want any rules,” the “Juice” raptress further elaborated. “But that doesn’t mean I’m out here f**king and s**king and ducking, it doesn’t mean he is either. It just means that like, there are no expectations, and that way, the love gets to just be the main event.”