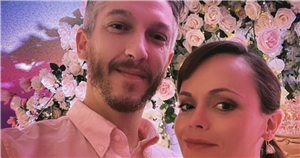 The Addams Family star Christina Ricci has become a mother for the second time after welcoming a daughter with husband Mark Hampton.

The 41-year-old posted a short clip of her baby girl sleeping on Instagram as she shared the news and praised her “incredible” partner Mark for being by her side.

“Baby Cleo is here. We are so in love with her. Also she has the most incredible dad imaginable. @markhamptonhair,” Christina captioned.

This is her first child with husband Mark, whom she got engaged to last year and married in October before shortly announcing days later on social media that they were expecting.

Mark was understandably excited at the arrival of his daughter, posting alongside Christina a photo of their baby daughter next to a gushing caption.

“My heart has exploded. @riccigrams and baby Cleo are doing fantastic, we’re all resting after such an eventful morning,” he wrote.

In the moments leading up to their baby's arrival, Mark is seen in a couple of images he shared on Instagram Stories wearing hospital scrubs as he prepared to welcome his daughter.

“Dr Baby time,” he captioned before thanking his wife Christina in a later video for “making the most beautiful babies.”

Mark continued to reflect on his day becoming a new dad in another photo he shared of Christina in hospital with baby Cleo immediately after she was delivered.

“What a truly emotional morning, never cried so much,” he wrote. “@riccigrams and baby Cleo are doing amazing!!!!”

Upon hearing the news, Christina’s fans and famous friends were quick to respond with congratulations in the comments.

“What a beautiful perfect child. YAYAYAYAYAYA CONGRATS. SO happy for you guys. YOU DID IT!", actress Juliette Lewis said.

Christina already shares six-year-old son Frederick with her ex-husband James Heerdegen and has full custody of him following their divorce being finalised last year.

Speaking to People a few months ago, the actress discussed how she has found her real-life role as mum to her son.

“Having a child changed everything, it’s made everything in my life actually important and matter. I now have to take things seriously, and I never did before,” she said, before adding light-heartedly:

“Most of my social things are play dates now. I barely ever go out at night unless it’s work related. It’s all lunches.”

To get the latest showbiz and celebrity news straight to your inbox, sign up to OK!'s daily newsletter.