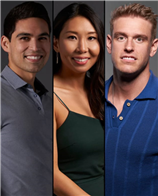 Just when you thought the drama from Love Is Blind Season 2 was beginning to die down, one of the show’s most controversial stars is once again stirring the pot.

No, Shake Chatterjee isn’t making degrading comments about Deepti Vempati — although, we’re about due for another round of nonsense from that doofus.

This time the scandal involves the show’s other loose cannon, Shayne Jansen.

Shayne wasn’t quite as villainous as Shake during his time on the show, but he should probably be grateful to Chatterjee for drawing attention away from all of his awful behavior.

Maybe it didn’t hit as hard because it didn’t happen on camera, but let’s not forget that Shayne got drunk and told Natalie that he hates her the night before their wedding!

We learned from the Love Is Blind Season 2 reunion that Shayne and Natalie are no longer together.

But based on their social media interactions, it seems that the situation is more complex than either party admitted to on camera.

She replied with a heart emoji, and many assumed that the troubled twosome had decided to give their relationship another chance.

Well, if they made such an attempt, then it certainly didn’t last long!

Earlier this week, a fan asked Shayne if he and Natalie “hate each other now,” and Shayne replied, “Ask @salvadior08.”

That’s the account of the Shayne and Natalie’s LiB co-star Salvador Perez.

As you’ll probably recall, Salvador got engaged to Mallory Zapata on the show, but he called off their wedding at the last minute.

Like Shayne and Natalie, Sal and Mal gave their relationship another shot after that, but they revealed on the reunion show that they’re no longer together.

And now, there’s reason to believe that Natalie and Sal are a couple!

In addition to Shayne’s cryptic comment, there are other indications that Sal and Natalie are more than just friends.

Earlier this week, Natalie posted the above photo, which understandably attracted quite a lot of attention.

One of the flattering comments came from Sal, who wrote:

“The old Nat can’t come to the phone right now. why? cause she’s dead,” Lee captioned the photo above, referencing a Taylor Swift song.

“What’s new Natalie’s number? I’ve been meaning to contact her about her car’s extended warranty,” Sal wrote in the caption.

“Leave a voicemail with a song only,” Natalie replied.

Needless to say, it’s not hard to see why fans jumped to the conclusion that these two are hooking up.

But if they are, then they’re definitely keeping things on the down-low for the time being.

“I know there’s been speculation that me and Sal are dating. We are not. We’re just really, really close friends,” Natalie said during a recent podcast interview.

She described Sal as “very honest person” and a “great guy,” but stressed that the two of them are just platonic pals.

“That friendship with him, I really appreciate,” Lee concluded.

Well, these two would make quite a couple, but for now, at least, it seems like they’re not looking to go down that road together.

But don’t give up hope just yet — not only is love blind … it’s also patient.