Shailene Woodley and Aaron Rodgers started dating in 2020, and the pair got engaged just a few months afterward. However, their relationship recently came to an end, with many news outlets reporting that Woodley and Rodgers had parted ways.

It’s not clear why Woodley and Rodgers called it quits. According to one resurfaced news report, a source said that the couple had many differences and “disagreed on a lot of things.”

Shailene Woodley and Aaron Rodgers reportedly had an ‘amicable split’

On Feb. 16, a source told People that Woodley and Rodgers had parted ways amicably.

“It was an amicable split; it just wasn’t working,” the insider said. “They’re very different people with busy careers and there were obstacles that they couldn’t surmount. They will remain friendly; there’s no bad blood and no drama. It just didn’t work out for them.”

People noted that it reached out to the pair’s reps for comments. The outlet said, “A rep for Woodley has not commented. A rep for Rodgers declined to comment.”

During their relationship, both Woodley and Rodgers had been in the news for political reasons. Mainly, in November 2021, Rodgers shared that he did not get the COVID-19 vaccine. Although Woodley has not revealed her stance regarding the vaccine, she has stood up for Rodgers against some media outlets.

In January 2022, a source told People that Woodley and Rodgers actually have different opinions on certain political issues. According to the insider, the couple had decided to not bring politics into their relationship.

“They are not talking about their politics, and they never really have,” the source said. “They disagreed on a lot of things. Early on, they decided to agree to disagree about things and not debate them.”

The insider also added, “She is not someone whose mind you can change, so Aaron hasn’t even tried.”

Shailene Woodley once said ‘the most important relationship’ is with oneself 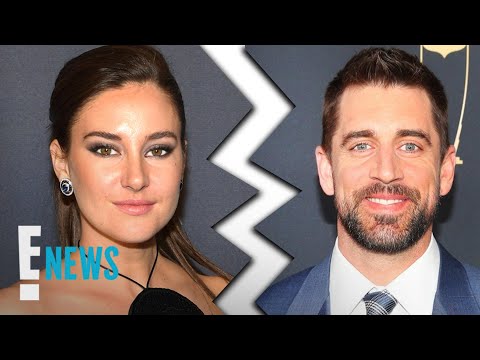 Woodley is no longer in a relationship, but it seems she might not have trouble coping with it. In 2020, the actor told Interview Magazine that it’s important for people to have a healthy relationship with themselves instead of relying on another person for everything.

“The greatest thing I could take away from this movie, as someone who’s watching it, is the sense that we’re conditioned to look for one person in our lives,” she said of the film Endings, Beginnings. “We expect them to bring us joy and happiness, and it’s such a falsity. That will never happen. In this movie you witness that through this woman’s journey. I hope people take that and apply it to their own lives, whether they’re in a relationship or not.”

She added, “The most important relationship you can cultivate is with yourself.”