The Duke and Duchess of Cambridge were joined by their only daughter Princess Charlotte as they travelled to Birmingham on Tuesday to attend the 2022 Commonwealth Games.

PHOTOS: So in sync! William and Kate’s best twinning moments

William and Kate took in the swimming at the Sandwell Aquatics Centre, where they were joined by the Earl of Wessex, Vice-Patron of the Commonwealth Games Federation, and his wife Sophie, who have been attending various events throughout the tournament.

WATCH: Princess Charlotte looks so shy as she greets well-wisher in Cardiff

It was a family affair for the Wessexes, who also brought their teenage daughter Lady Louise Windsor and son James, Viscount Severn to the event.

This was the Cambridges’ first appearance at the Games and comes shortly after William watched the England women’s football team, the Lionesses, clinch victory over Germany at the Euro 2022 final on Sunday night. 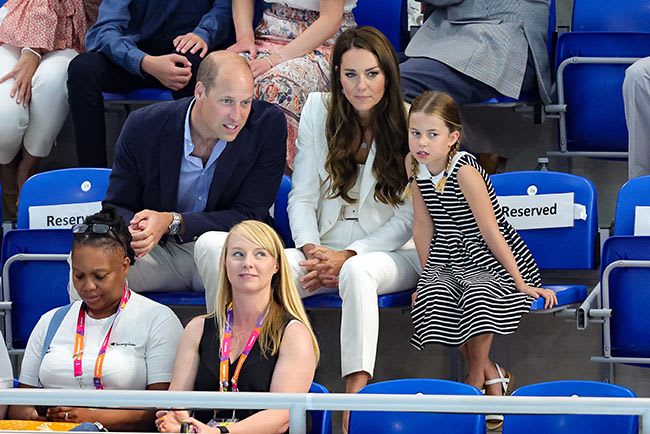 William and Kate were joined by Princess Charlotte at the swimming

William and Kate looked delighted to be reunited with Edward and Sophie as they greeted each other with a kiss before taking their seats. 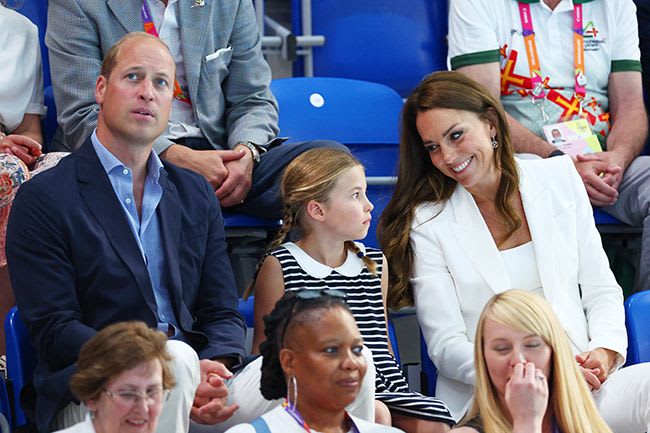 Kate looked so chic in a white blazer and trousers combo

The Duchess was her typically chic self in a white suit that consisted of high-waisted trousers, a top, and a smart blazer. She had her hair styled in loose waves and a side parting. 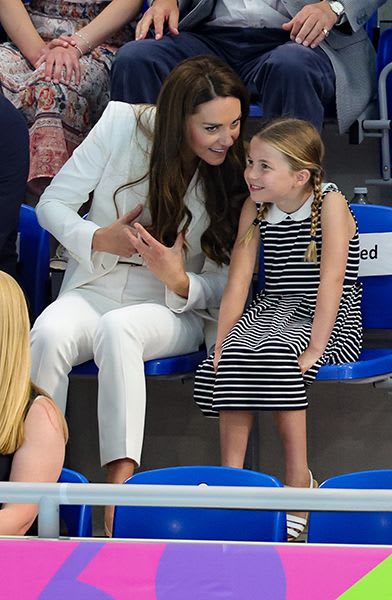 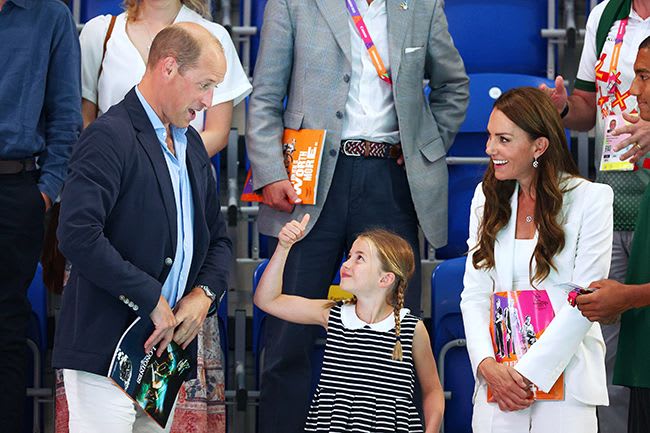 Charlotte gave an enthusiastic thumbs-up sign to her dad William

She appeared to thoroughly enjoy herself as she gave an enthusiastic thumbs-up sign to her dad William, and at one point looked surprised as the action unfolded. 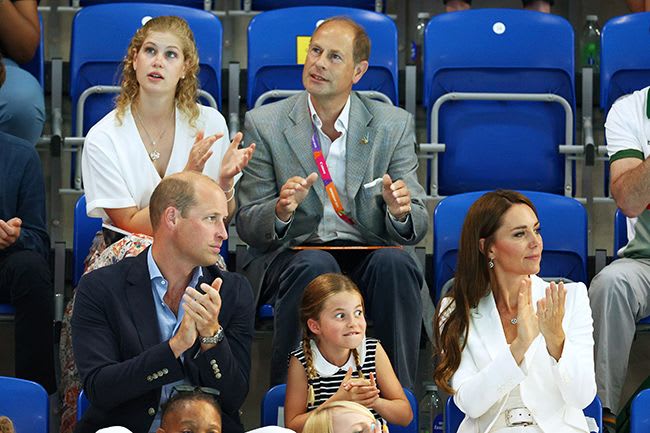 The little girl was enthralled by the action

The Wessex family sat behind the Cambridges, with Sophie looking gorgeous in white trousers and a pastel peach printed top. Her daughter Louise, 18, coordinated with the royal in a white blouse and a patterned maxi skirt in similar hues.

The Wessex family also joined the Cambridges at the swimming

Earlier on Tuesday, Edward, who has been a regular attendee at the Commonwealth Games, was spotted watching the athletics fixtures with his children. The family also enjoyed the weightlifting and swimming events the day before.

The Commonwealth Games, which kicked off on Thursday 28 July, are running until Monday 8 August.

They were seated behind the Cambridges at the Sandwell Aquatics Centre

Ahead of the Games, Edward released a heartfelt message, saying: “The waiting is over. The XXII Commonwealth Games is about to get underway and for the next 11 days all eyes will be on Birmingham and the West Midlands of England. To all athletes, officials, spectators and visitors I bid you a very warm welcome and thank you all for coming. It simply wouldn’t be the great festival of sport it is without you.”

Prince Edward is Vice-Patron of the Commonwealth Games Federation

The Queen’s youngest son continued: “Yet the Games are more than just about sport, they are the greatest manifestation of the Commonwealth: our extraordinary collection of countries linked together through a myriad of bonds of common interests and relationships. The parallel arts festival is an integral part of this celebration and reminds us of our shared values and the tremendous talent that exists across our family of nations.”