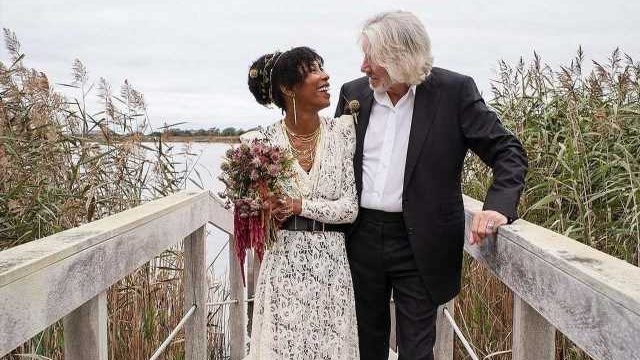 The 78-year-old rocker is celebrating as he introduces his new wife Kamilah after exchanging wedding vows with her in an intimate ceremony in New York.

The couple tied the knot at his Bridgehampton estate in New York, with photos of their special day shared to his Instagram and Twitter pages.

“I’m so happy, finally a keeper,” he penned beneath a series of snaps, showing the couple exchanging rings in the intimate service.

The ceremony took place next to the water’s edge and Kamilah looked stunning in a white lace wedding dress.

While the pair have kept their relationship largely under wraps, they are thought to have been an item for a few years and were pictured together for one of the first times at 2019’s Venice Film Festival, reported MailOnline.

Waters’ latest wedding comes six years after he divorced Laurie Durning in September 2015 after three years of marriage. They got engaged in 2004.

Roger Waters met Kamilah when she worked as a driver for one of his concerts.

“I was in the same place for two weeks and we were being transported between the hotel and the stadium. My security guard would sit with her and they’d talk while I was in the back. I don’t know, something attracted me,” he recalled in a 2018 interview with Infobae. “One day I said, ‘Excuse me,’ and she turned around. ‘Did someone ever tell you that you have beautiful cheekbones?’ I saw a small reaction, and that was the beginning.”