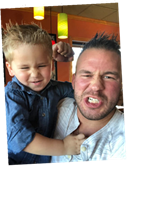 Remember when Kaiser’s father, Nathan Griffith, complained that there were bruises on Kaiser and claimed that he had told him that Jenelle’s husband, David Eason, had hit him with a stick?

And then remember how Jenelle’s rebuttal was that Nathan was actually the one who had hit Kaiser, which essentially just meant that they both agreed that he’d been abused by someone?

We’ve heard allegation after allegation that Kaiser is being abused by David, that Jenelle neglects him, that Nathan doesn’t care about him enough …

And it’s all just very sad.

And sometimes, like in the story we’re going to talk about today, it’s also deeply uncomfortable and truly bizarre.

OK, so right now, Nathan and Jenelle are getting along.

That’s pretty strange in itself, considering, as we’ve mentioned, the history of Nathan accusing David of abusing Kaiser.

But since everyone is friendly now, it seems like Nathan has been spending a little more time with his son.

So what have they been doing together?

Generally, Hooters is a decently family-friendly place — sure, the whole thing is that the servers wear tight, revealing clothing, but it’s not like a strip club or anything.

You can see women wearing similar clothing pretty much anywhere.

But the issue here isn’t that Nathan took Kaiser to Hooters.

It’s that Nathan took Kaiser to Hooters, took a picture with him standing next to a Hooters employee, then thought it would be cool to post this:

As you can see, Nathan captioned the photo with “Ummm… Kaiser said this was his favorite restaurant. I wonder why.”

Just in case you couldn’t tell what he was implying, he added a laughing emoji and a “like father, like son” hashtag.

This is gross for many, many reasons, mainly because Kaiser is only six years old.

But to really break it all down, let’s check in with what the fine folks over at the Teen Mom Reddit page are saying about Nathan’s photo.

One Reddit user said that this is an example of sexualizing children, and added that there’s a double standard here because “No one would ever say ‘my little girl loves these men because they have a huge bulge.'”

“That’s sickening, and what Nathan said should be seen as just as sickening.”

“Tbh I immediately pictured that the waitresses were super sweet to him and made him feel adorable and worthy, and he’s just not used to that,” another person wrote.

One suggestion was that “Maybe he’s only like 5 and likes the food and spending time with his dad?”

“Kaiser looks adorable here,” someone else commented, “it’s such a shame all of his parents are completely and utterly horrific.”

Ain’t that the truth?