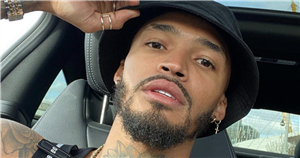 Michael Griffiths has revealed he was sent death threats following his dramatic time on Love Island back in 2019.

The 29-year-old quickly shot to fame for taking part in the ITV dating show, where he was embroiled in a dramatic love triangle between Joanna Chimonides and winner of the series Amber Gill.

Amber, 23, and Michael appeared to be in a good place before she went off to Casa Amor. However, after staying faithful to the former firefighter, she returned to the villa only to discover he'd coupled up with Joanna.

Now, nearly two years after appearing on the show, Michael has opened up on the abuse he received from keyboard warriors who told him to "kill himself". "I guess when I first came out I was getting quite a lot of death threats. People telling me to kill myself," he said. "There were people telling me they knew where I lived and stuff like that and they were going to do things when they see me."

Michael insisted that none of the threats he received were ever carried out, which prevented him from reporting them to the police.

The reality star, who previously had domestic rows with Danny Williams after moving in together, went on: "But nothing ever came from it, I’m not gonna live my life in fear because somebody is a bit of a keyboard warrior.

Michael continued by explaining ITV provided him with a therapist to speak to about everything he was going through following his time on the show.

He said that while he was told to report what he'd been experiencing to the police, he simply felt there was no need to.

"When you come off the show, the show kind of gives everybody therapists, you have to talk to them for a while," he told Daily Star. The fitness fanatic continued: "They asked me things like this and I told them a little bit and they said I should go to the police and report it. I never really did, I just thought I can handle it myself.

"If anything comes about, I’ll just deal with it when it comes, but nothing ever did.

"I kind of feel like as time has gone on, people have seen who I actually am, like the kind of person I am and they’ve realised that I’m not what they’ve seen in a one-hour slot on seven weeks on TV."

Speaking about his time in villa, Michael also revealed that producers edited out several argument where he had "to calm down".

He added: "There were some bits that were missed that could have been crucial to argument but it doesn’t really bother me anymore, because it’s in the past now."

Michael said there's "no animosity on my side" and explained he feels it's all in the past now.