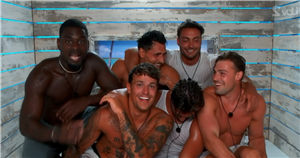 Love Island fans were left confused by the boys' reaction to finding out that the girls had gone to stay in Casa Amor on Sunday (3 July) night's episode.

Gemma, Paige, Tasha, Indiyah, Ekin-Su and Danica, recently headed on a 'night out', only to then be taken to Casa Amor, a second villa.

The news was eventually broken to the boys via text, and they instantly started running around the villa before all jumping into the swimming pool fully clothed.

Many viewers were confused by the boys' reaction, as they knew that the girls would now be staying with six new boys in Casa Amor.

Become an OK! VIP and get all of our exclusive interviews, videos and stunning photo shoots sent straight to your inbox every week!

You'll receive an email with stories exclusive only for OK! VIP members, including celebrity house tours, baby reveals, wedding snaps and so much more!

Get exclusive celebrity stories and fabulous photoshoots straight to your inbox with OK!'s daily newsletter

"I thought these lot are secure in their relationships, why are these boys so excited ????" one baffled Love Island fan tweeted.

Another said: "That reaction from the boys was… something….," as a third viewer said: "WHAT ARE THESE REACTIONS BOYS".

Many were confused by their excitement and someone else said: "These guys are taking excited to a new level," while another said: "The boys reaction was embarrassing".

Jacques, Luca, Dami, Davide, Andrew and Jay then had to pack the girls' suitcases for them before heading to bed.

The following morning, the boys woke up to find six new girls walking into the villa and they couldn't contain their excitement again.

Cheyanne, Summer, Mollie, Coco, Chyna and Jazmine made quite an entrance, and wasted no time stirring things up and planting doubts in the boys' minds about their partners in Casa Amor.

Over in the second villa, the girls had been getting to know Billy, Josh, Jack, Samuel, Deji and George, and it was revealed that Gemma already knows Billy.

Speaking to the girls as the boys entered the second villa, Gemma confessed: "I know one of them, the one in the grey top."

Later as all the Islanders met, Gemma admitted: "I know Billy, I feel like me and Billy have got mutual friends…"

Gemma then later told the girls that Billy is one of her best boy mate's friends and claimed that he is a bit of a "player".

The following day the 19 year old could be seen chatting to Jack Keating by the pool as they bonded over their famous families.