Kelly Ripa is a doting mom to three, and her kids are growing up right before her eyes, revealing that one of them just hit a milestone year.

On her show, Live with Kelly and Ryan, the host revealed to Ryan Seacrest and the audience that her daughter, Lola Consuelos, had turned 21.

VIDEO: Kelly Ripa’s children steal the show on Live with Kelly and Ryan

“How does that change mom’s view of Lola now that she’s 21 and totally legal for everything,” Ryan asked, to which Kelly responded: “I said to her ‘you can finally have a cocktail.'”

He then quizzed her on the celebration for Lola, with Kelly revealing that her daughter was currently in Europe looking for an apartment for her study abroad program.

Her audience broke out into awws when they realized the family wouldn’t be together for the big moment, with Kelly joking: “Yes, poor Lola.”

“She had a trip planned, it’s her last hurrah before she’s off the family nipple, so to speak,” she added to the studio’s amusement.

A post shared by LIVE with Kelly and Ryan (@livekellyandryan)

The ABC star then explained that she went through a tough time trying to find pre-approved photographs of her daughter she could post on her Instagram to mark the occasion.

“There’s a reason I go through these social media blackouts,” she shared, giggling. “It’s because I’ve been forbidden to post anything from those monsters that I raised!”

She then turned the tables on her kids by explaining that she’d still end up showing pictures of her kids on the show instead.

“They never seem to realize that what doesn’t pass the sniff test on social just gets shown here. It’s the blessing of my kids having no idea what I do for a living.” 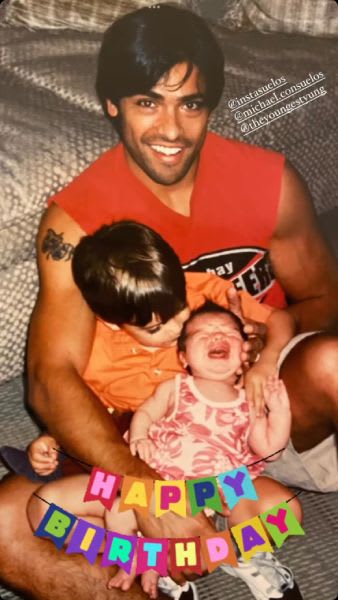 The host then shared a series of throwback photographs of her daughter soon after she was born, even including one hilarious picture of her husband Mark happily sitting with a young Michael cuddling up to a crying baby Lola.