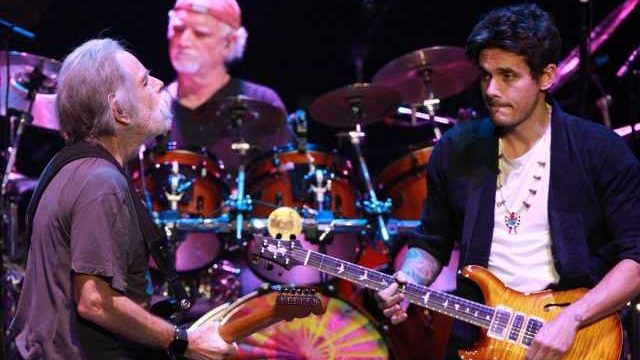 Hours after the ‘Your Body Is a Wonderland’ singer pulled out of the festival, both weekends of Playing in the Sand are canceled as many staffers are also infected with the virus.

AceShowbiz –Dead & Company has canceled its upcoming festival, hours after its frontman John Mayer announced his COVID-19 diagnosis. The band was forced to scrap the Playing in the Sand festival altogether as many crew members are also down with the virus.

The band announced the cancellation on Instagram on Thursday, January 6, one day before the festival was set to take off. “With much sadness and after great consideration of every possible scenario, the Playing in the Sand shows in Riviera Cancun on January 7-10 and January 13-16 have now been canceled by CID Presents due to the spiking COVID-19 cases,” read the statement.

It explained, “Dead & Company and CID Presents tried everything possible to bring normalcy and to deliver a great experience and amazing music, but with each day it became increasingly clear that canceling is the correct thing to do for the fans and for our crew.”

According to TMZ, Dead & Company was forced to cancel both weekends of its Cancun festival because they can’t pull off the event safely with so many staffers being infected. Words are more than 20 staffers of CID have tested for the virus.

Hours earlier, the band announced Mayer got COVID. “Today, just prior to leaving for Mexico, per his physician, @JohnMayer tested positive for COVID-19 and will be unable to perform at the upcoming ‘Playing in the Sand’ event in Riviera Cancun January 7-10,” they said.

The festival was initially expected to go on without the “Waiting on the World to Change” crooner. The band’s guitarist and vocalist Bob Weir said, “We came down here to have fun. Unfortunately some of our brothers cannot make it but fun is what we’re going to have.”

With its frontman pulling out off the shows, Tom Hamilton (Ghost Light, Joe Russo’s Almost Dead, Billy & The Kids) was set to fill in for weekend one. The band added in the statement, “In these unprecedented times fans should expect many rare and different tunes.”

Those plans, however, have been scrapped now.