Jennifer Gates has something to say about her mother, Melinda Gates. The family has been in the news for much of 2021 as Melinda and Bill Gates have had to sort out the end of their marriage largely in the public eye. CNBC reported that the billionaire couple’s divorce was final on August 2, after 27 years of marriage.

The world was shocked when Melinda and Bill announced their divorce on May 3. The Gates marriage seemed like a fairytale to many, but appearances aren’t everything. In July, The New York Times reported that Bill had a “reputation for questionable conduct” at Microsoft and the Gates foundation. Bill reportedly had an affair 20 years prior, and other details about the billionaire’s behavior differed from Bill’s squeaky clean public image. According to the Times, it was Bill’s friendship with sex trafficker Jeffrey Epstein finally drove Melinda to end her marriage. The Gates met Epstein in 2011, three years after he pled guilty to soliciting prostitution from a minor. Melinda told her husband she didn’t like him spending time with Epstein, but sources told the Times that Bill continued his friendship with the sex offender. Melinda reportedly hired divorce attorneys in October 2019 when the relationship between her husband Bill and Epstein became public.

However, there’s at least one Gates sticking by Melinda. Keep reading to learn what Jennifer has to say about her mother. 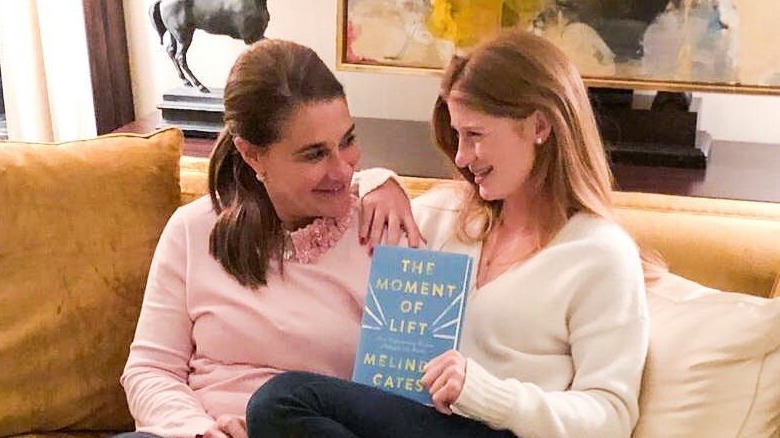 Jennifer Gates calls her mom Melinda Gates a “hero” in a tribute for her 57th birthday with a series of photos on Instagram. Jennifer posted an Instagram story with an older mother-daughter photo that said (via People), “Happy birthday to our one of a kind mom, woman and hero.” Using a recent photo with her mother Melinda, Jennifer posted another Instagram story, saying, “Wishing you the biggest celebrations today and most incredible year ahead.” People reported that Jennifer just finished her second year of medical school and married her fiancé Nayel Nassar.

Jennifer seems close to Melinda. She posted another sweet Instagram about her mom in April 2019 when Melinda’s book came out. Jennifer posted a mother-daughter photo with the caption: “I’m so proud of my incredible mom @melindafrenchgates on the launch of her book, Moment of Lift! So excited it is finally out – get your copy at momentoflift.com!” On the day Bill Gates and his wife announced their divorce, Jennifer took to Instagram once again, saying it was a “challenging” time for her family. People reported Jennifer wrote on an Instagram story, “I’m still learning how to best support my own process and emotions as well as family members at this time, and am grateful for the space to do so.”